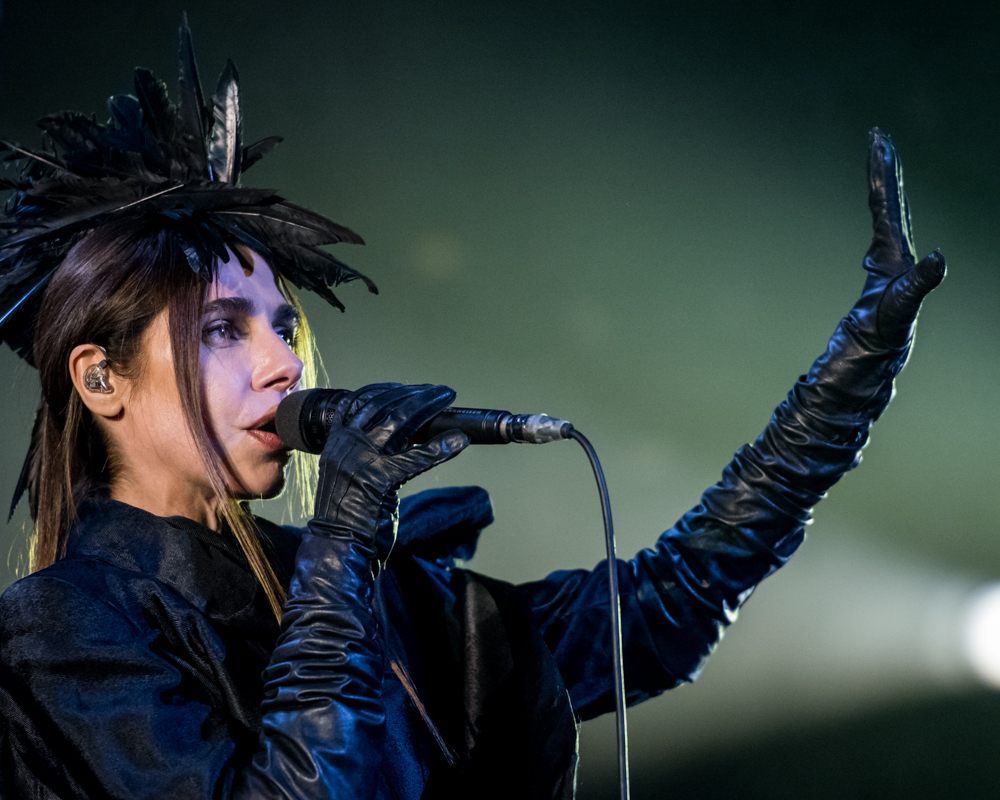 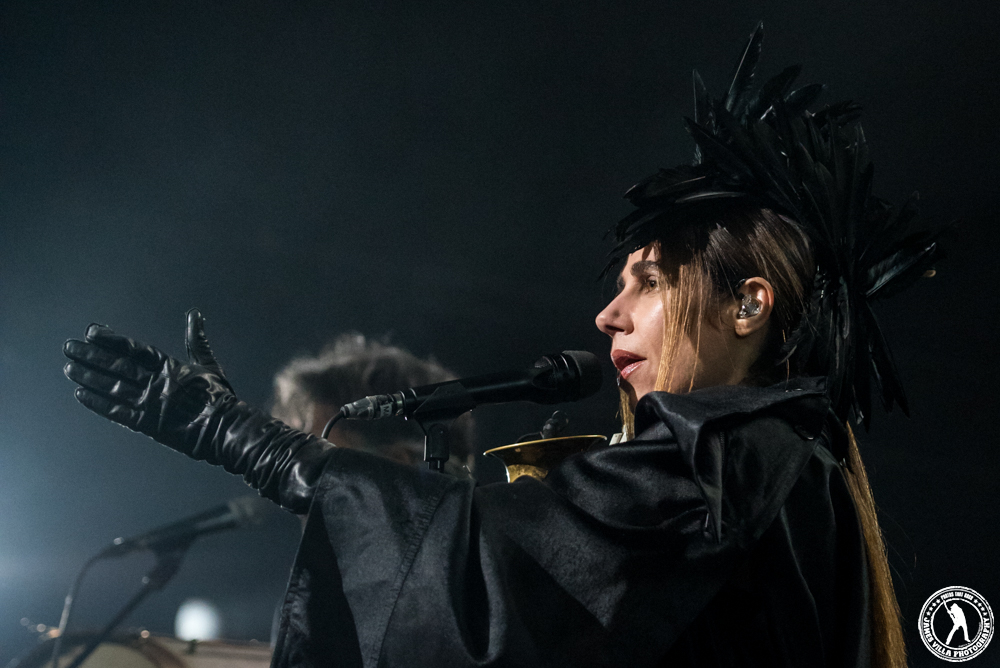 Two weeks into her U.S. tour supporting last year’s The Hope Six Demolition Project and PJ Harvey came to Dallas, The Bomb Factory hosting the acclaimed musicians first show in the city in well over a decade. Back during a time when the world wasn’t in such a state of chaos. Or it was at least a time when it was easier to be blissfully ignorant to all the troubles and problems that plagued parts of the world, issues that have only been exacerbated in recent years and ones that were fundamental in shaping Harvey’s first record in five years after she glimpsed some of the havoc around the globe first hand.

A crowd of a few hundred before eight-o’clock quickly grew into a gathering of a couple thousand, North Texans eager to see this long-awaited event, breaking into roaring fanfare as the lights dimmed and things got underway shortly before nine.

The Bomb Factory was perhaps darker than it had ever been, the lights that did remain on barely glowing, ensuring the stage was the only place to look. The stage lighting was somewhat artful, often soft (and occasionally blinding) it would illuminate the entire band near perfectly this night. 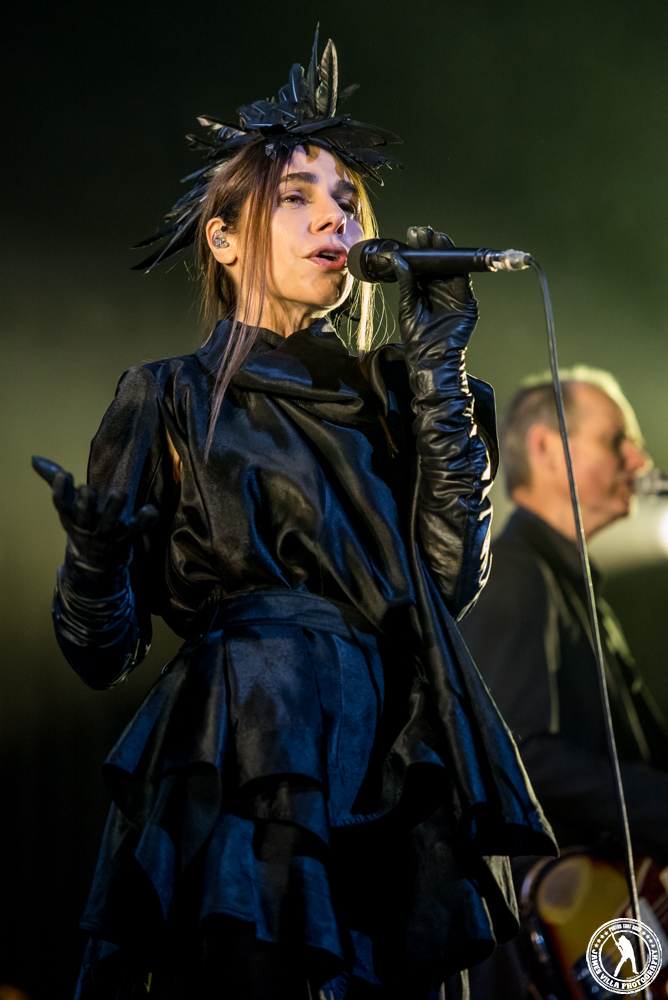 It was almost ceremonial the way the band marched out on stage, looking like a small scale drumline, a few of the musicians carrying snare drums or even a bass drum as they took their spots, all ten of the microphones scattered around the stage being used as Harvey led them through “Chain of Keys”, playing her saxophone when necessary.

It was the first track they would play off of The Hope Six Demolition Project, performing the record almost in its entirety, “The Ministry of Defence” and “The Community of Hope” rounding out the first three songs, the former of those standing as one of the strongest of the set, and all together they made for a stunning start to the show. They were undeniably charged and immediately began to highlight the rare form Harvey and company were in.

She walked a line between performer and performance artist, her moves often being impeccably fluid and done in perfect time to the music, while at other moments she gazed around the stage in sheer wonder and amazement, as if there was a completely different world abundant with all sorts of vivid creations that only she could see. It reinforced the idea that she is as eccentric as ever, doing things her way, which has worked out well seeing as it has established her as one of the most creative artists of the past couple decades. 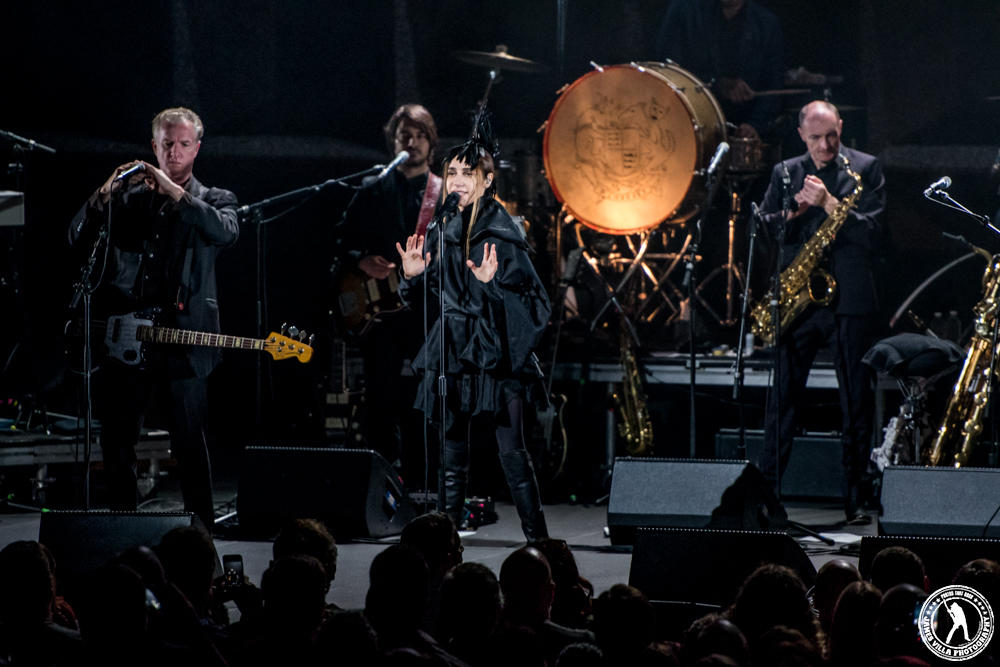 Outside of the new music, the set was largely comprised of more recent material, “The Glorious Land” from Let England Shake earning her rave fanfare; while the at times ambient “Dollar, Dollar” was another poignant track that was a chronicle of Harvey’s travels, the songstress singing of how affected she was by seeing a young child begging for such a meager amount of money, feeling compelled to help in some way.

Another highlight from the new record was the jazz-infused “The Ministry Of Social Affairs” the saxophones being riveting, particularly at the end when Harvey ceded her spot at center stage to one of her band mates who delivered a stunning sax solo; and as the 90-minute long set neared its conclusion, they finally busted out some of the highly regarded hits everyone had been dying to hear, such as “Down by the Water”. It was executed flawlessly and sounded ravishing (the longer they were up there, the more amazing Harvey sounded), hands down being the best song of the night, a night that soon ended with a two-song encore.

This was the show everyone had wanted and hoped desperately to see, PJ Harvey not disappointing the longtime fans that had been waiting for years to see her return to Dallas nor the newer ones who were probably wondering if they’d ever get the opportunity to see her. 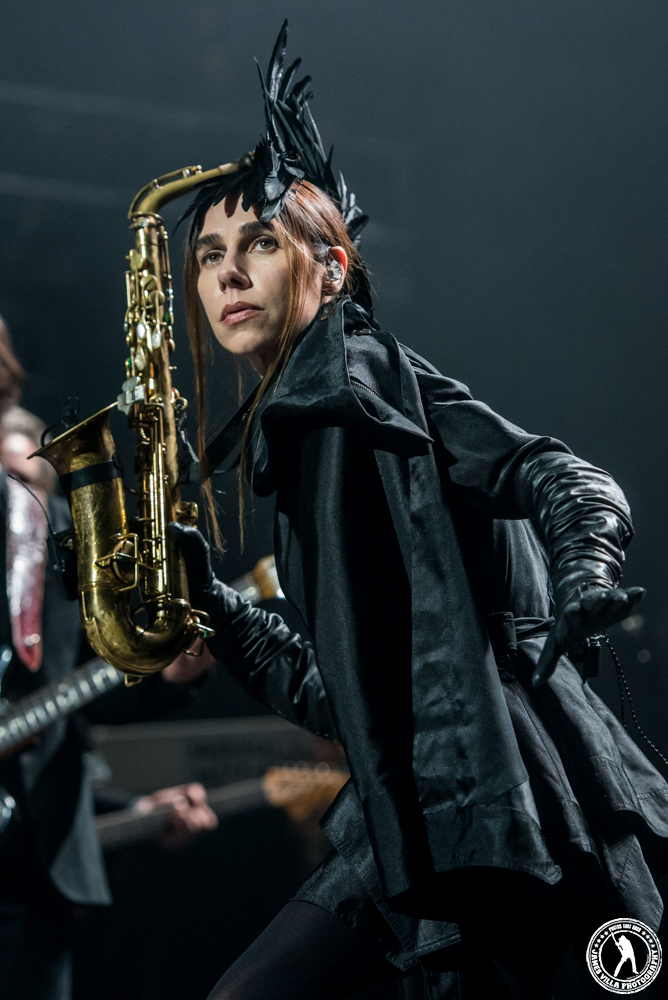 It was all so carefully orchestrated, the nuances of the music and the performance being what made it so marvelous, Harvey having that persona of any truly great showman: being utterly compelling. She wielded it exceptionally well, making certain it was impossible for anyone to take their eyes off of her, without portraying even the subtlest amount of a grandiose attitude. She was just there to perform and share her message, letting the songs speak for her as they were the closest she came to ever touching on world problems or political issues, a couple expressions of thanks being about the extent of the dialogue to the spectators this night.

And that was fine, because these new songs are so eloquently written and steeped in such raw and pure human emotions that they convey the message and tap into the devastation just fine on their own. Perhaps fans would have personally enjoyed hearing more classics than were played this night, but that wasn’t what the show was about. The show was about Harvey sharing her experiences with as many people as she could, how visiting some war-torn countries changed her and opened her eyes to how the truly less fortunate live or scrape by, and at the very least inform others of the state some live in.

Chain of Keys
The Ministry of Defence
The Community of Hope
The Orange Monkey
A Line in the Sand
Let England Shake
The Words That Maketh Murder
The Glorious Land
Written on the Forehead
To Talk to You
Dollar, Dollar
The Devil
The Wheel
The Ministry Of Social Affairs
50ft Queenie
Down by the Water
To Bring You My Love
River Anacostia