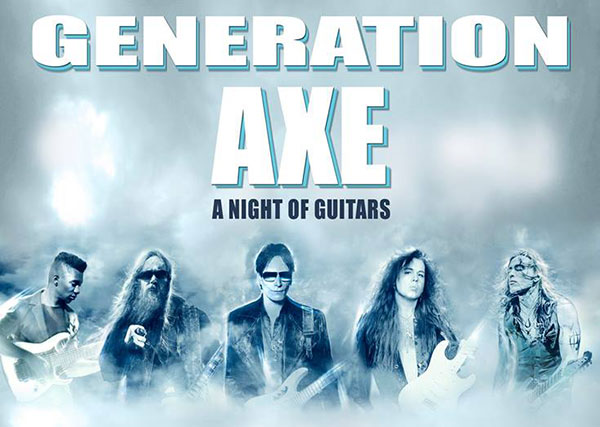 FOR GENERATION AXE – A NIGHT OF GUITARS

February 16, 2016 – The term “supergroup” gets thrown around on a regular basis these days, however, a new tour featuring some of the greatest guitarists of all time is about to truly give the term a whole new meaning.

Beginning on April 5th in Seattle, Generation Axe – A Night Of Guitars is hitting the road for 26 performances in North America.  Tickets for all shows go on sale Friday, February 19th.

“The Generation Axe show is a unique performance of five fiercely talented guitar players coming together to create a 6-string extravaganza that is sure to amaze and delight,” commented Steve Vai.

The Generation Axe fan experience will go way beyond simply gathering five guitar greats on one stage to jam.  Each tour stop will include a variety of collaborations by the five players, including everyone performing together as one cohesive band with a rhythm section including Pete Griffin (Dweezil Zappa, Stanley Clarke, Edgar Winter) on bass and Nick Marinovich (Yngwie Malmsteen) on keys.  Vai, Wylde, Malmsteen, Bettencourt and Abasi will perform songs from their various catalogs and join forces on some well-known songs (as well as probably a few unexpected, unearthed gems).

Making this rare tour experience even more special, Generation Axe VIP packages will be offered, giving fans access to these guitars masters and exclusive one-of-a-kind memorabilia.  A front row package (including a meet & greet), a meet & greet package, and a VIP tour package will be available.  For more information, visit www.generationaxe.com.