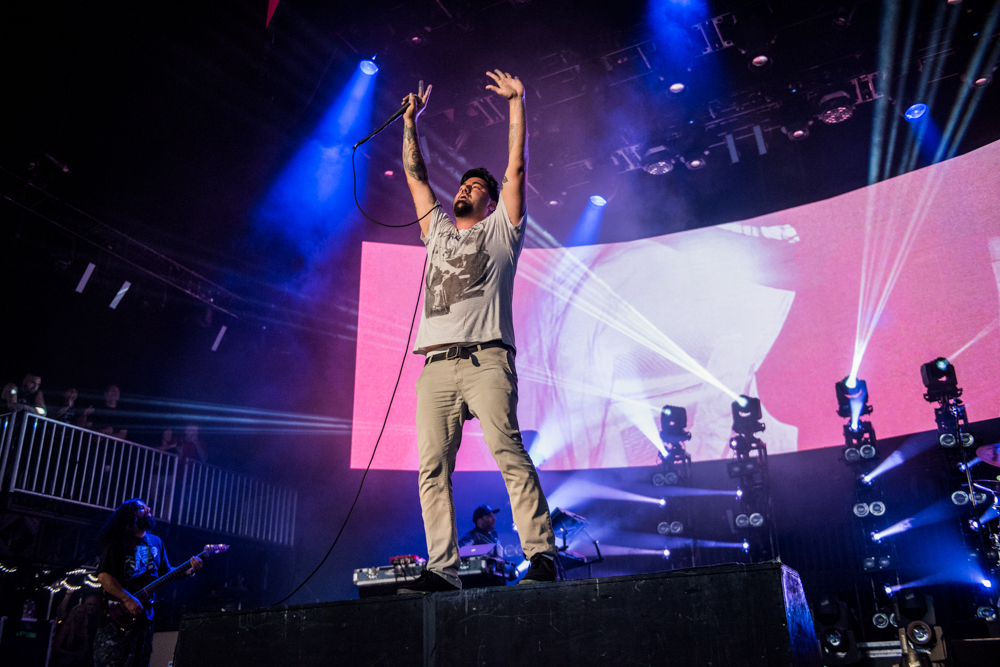 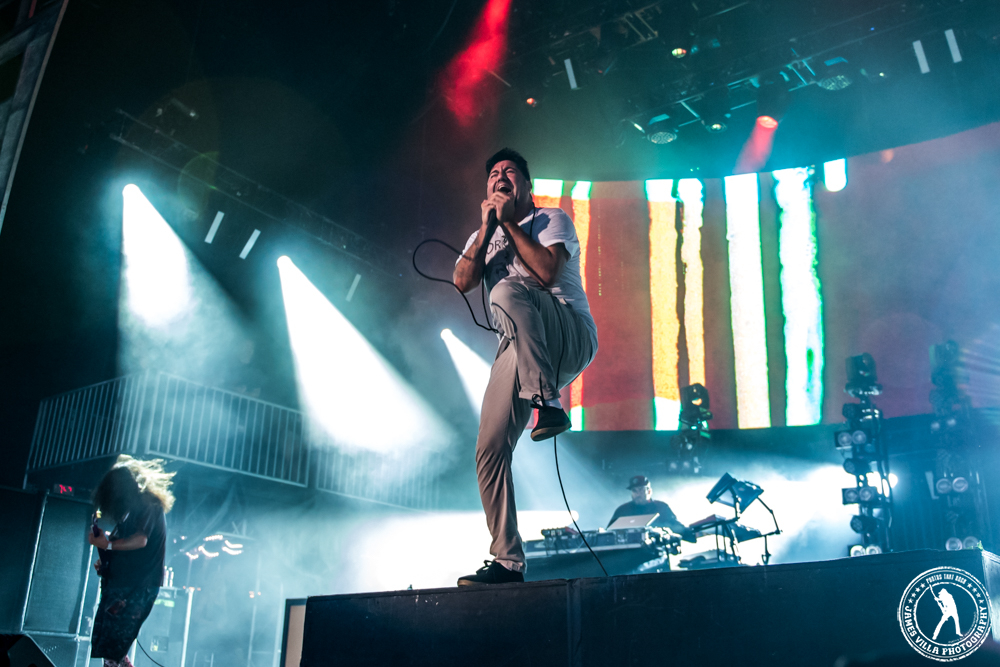 Gexa Energy Pavilion was quite possibly hosting THE show of the summer this night.

Incubus and Deftones’ co-headlining tour was finally reaching Dallas; the outdoor amphitheater being pretty lively even early on, cars constantly pouring into the parking lots when I got there around six in the evening, and there were already plenty of patrons out then.

It was something to see after the second of the two opening acts finished, concertgoers who had taken their seats heading out for refreshments or whatever. It was still relatively sparse, considering it’s a twenty-thousand capacity venue, from all the seats under the awning to the massive lawn space further out. Then, moments before Deftones 7:40 start time, the venue was suddenly full. Seats that had been vacant just ten minutes before were all filled. From where I was, I couldn’t even see a hint of green from the lawn; everyone springing to their feet once the lights went down.

A few different risers were set up, one being right at the front of center stage. The crowd was already hollering as loud as they could, but when Chino Moreno strolled onto the stage and hopped up on that stand, everyone went wild. It is rather stereotypical for everyone to like a frontman of a group the most, but that is certainly the case with Moreno, some fans even getting a chant of his name going later in the night. 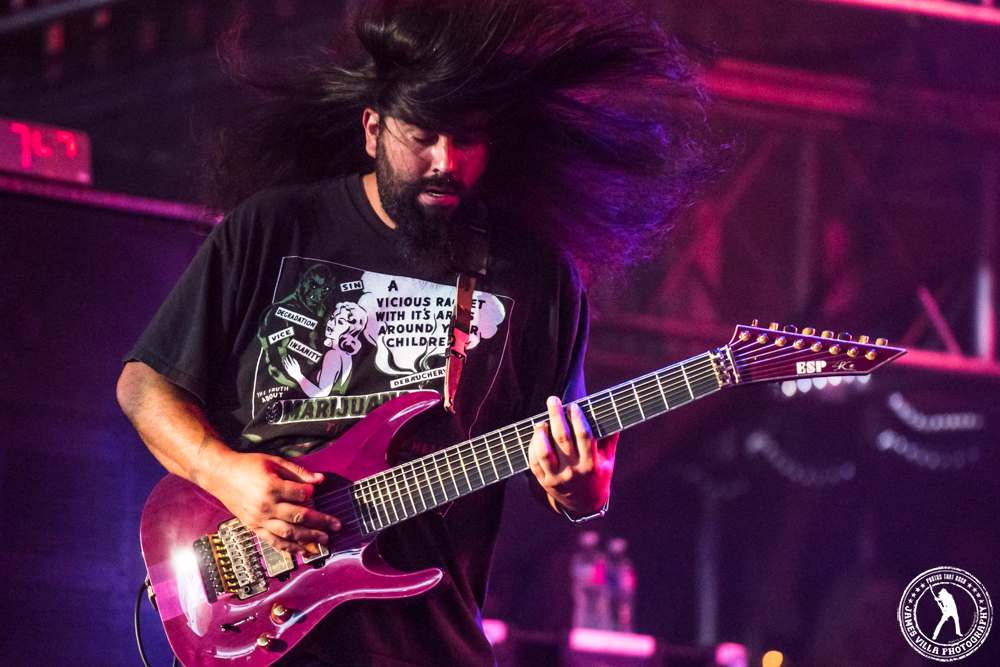 This whole night was partly about nostalgia for fans, given each of the co-headliners have been around for so long, each even having achieved mainstream success about fifteen years ago. Things would get a little more nostalgic for Deftones fans as the set progressed, but to begin, they took everyone back to 2010; Moreno leaping off the riser once “Diamond Eyes” kicked in.

It took him no time to get into form, howling into the microphone as he hunched over, grabbing the cord of the mic and twirling it around later on. That got them off to a ferocious start, and they never let up for the little more than an hour that they had the stage. “Rocket Skates” felt like a fitting follow up as they got the first two singles from Diamond Eyes out of the way early, Abe Cunningham being merciless as he delivered the beats.

“…Everybody get the fuck up!” said Moreno after greeting the Dallas area fans. Later in the night, he mentioned that they have been to Dallas many times over the years, saying he felt the shows still continued to get better and better. Clearly, the city, as well as Texas in general, has a place in the bands heart. 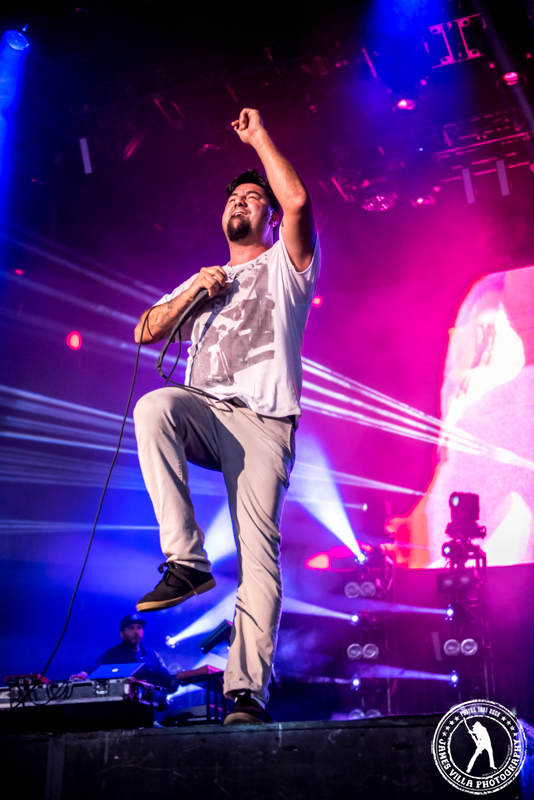 They took it back to pre-2000, “Be Quiet and Drive (Far Away)” finding bassist Sergio Vega moving all over the stage; while “My Own Summer (Shove it)” was the favorite it always is. It’s really something to hear bands of this level do songs like that. Ones that are beloved by literally all of their fans, the screams and the sudden spike of pure euphoria being heard and felt in the air. Such was the case for that one, fans jumping around and singing along to every last second.

It hadn’t taken them long to both solidify their hold over the thousands and thousands of people who had turned out or to find a rhythm. By the time they got to “Knife Prty” (which came barely over halfway through the set), they had gone well past just merely “being in the zone” so to speak, instead, they completely dominated it.

Before moving on (with “When Girls Telephone Boys”), Moreno asked the lights be brought up, wanting to see everyone. The natural light was slowly fading as the sun continued to set, the frontman beaming at everyone as he surveyed the masses. They soon returned to the acclaimed White Pony album, knocking out “Passenger” before Moreno picked his guitar back up. The amount of fanfare heard upon the crowd recognizing “Change (In the House of Flies)” was deafening. It was one track people had been waiting all night for, savoring every second of it as they sang along. 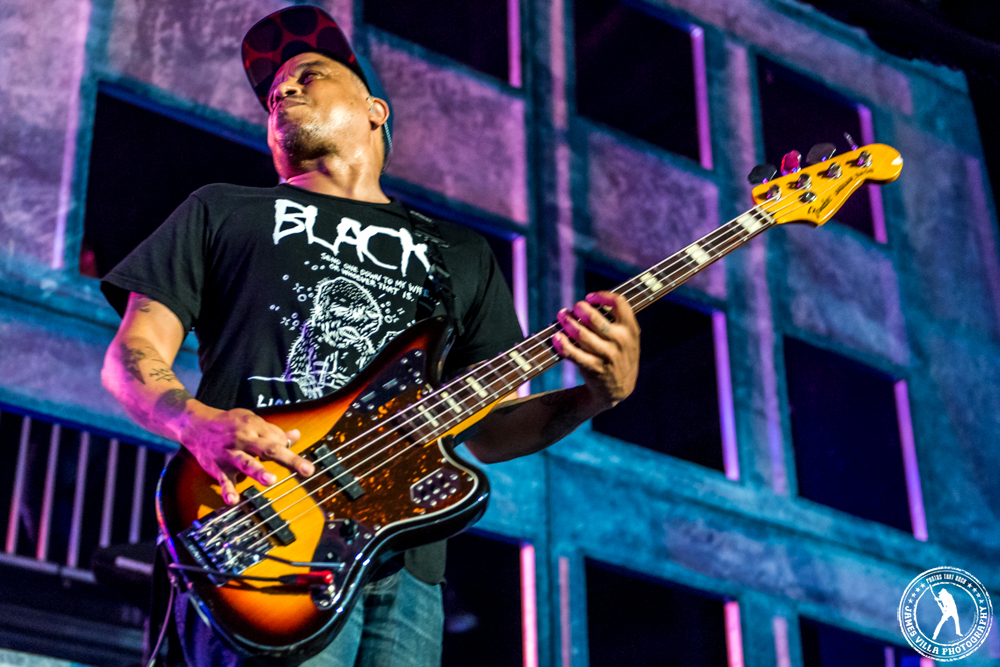 That also signified that the end was near, the classic off their 1995 debut album, “Engine No. 9”, bringing this unforgettable performance to a ferocious and stellar finish.

This was only my second time seeing Deftones. Honestly, much of their music is heavier than what I typically can get into. But what has a hard time getting my attention through a pair of headphones or small speakers… well, you just can’t ignore it in the live setting. I think part of that is due to the explosive show that goes along with the behemoth songs that they play. You can’t take your eyes off any of them for the duration they have the stage. It’s as charged a show as they come, the likes of which a band could only pull off after a couple decades on the road, perfecting their own formula and getting the chemistry as strong as possible.

Such a phenomenal band to see live. I know everyone already knows that, but still…

Now there was only one thing on my mind, “After Deftones took the energy level up so high, was there even anywhere left for Incubus to go?” I had my doubts, though would soon find out for certain.