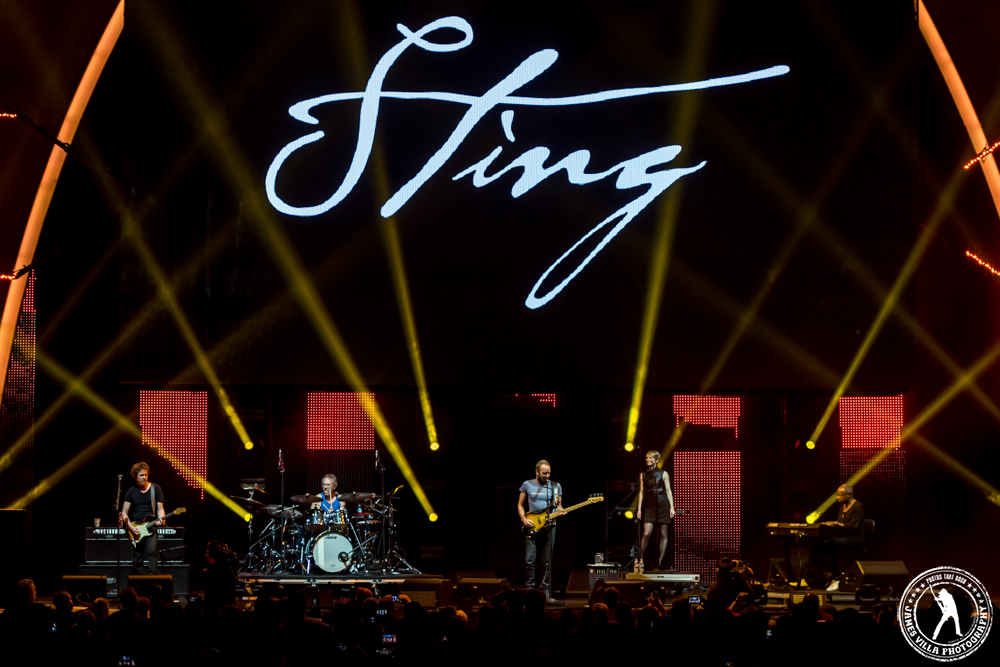 With the College Football National Championship taking place in Dallas (well, technically Arlington, where AT&T Stadium is located), there were a lot of events going on in and around the Dallas/Fort Worth area. One of those was the AT&T Playoff Playlist Live!, which took place on both Saturday January 10th and Sunday the 11th at the American Airlines Center, with some pretty notable acts performing.

On this Sunday night, the eve of the showdown between Ohio State and Oregon, Sting was headlining.

A few hundred patrons showed up early on, wanting to fit in as much of the party atmosphere as they could; and DJ IRIE was spinning some songs to entertain those who arrived before the official 7:30 start time. You also had Kristi Nelson (a news personality from NBC 5 in the Dallas area) being an emcee of sorts, and she was the one who introduced the opening band, the Los Angeles-based Echosmith. 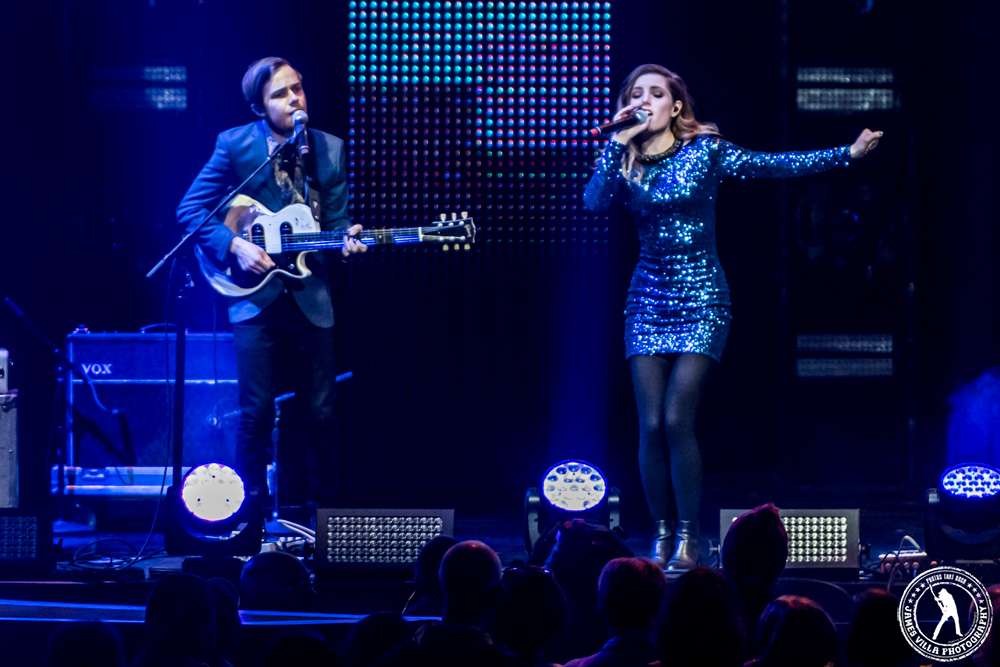 The four-piece rock/indie pop band is made up of all siblings, from guitarist Jamie Sierota, to bassist Noah Sierota, drummer Graham Sierota and singer Sydney Sierota. Three of them are still teenagers.

Their debut record, Talking Dreams, has been out for some time now, but within the last year or so, they’ve really started making waves, from playing some hot tours and festivals to scoring a platinum single.

Right from the start they proved to know what they were doing, handling themselves with confidence as they ran through one track after another from that debut album. They relied some on additional percussion, with Sydney striking a floor tom that sat in front of her mic stand at times on “Come Together”; and she also led some of the audience in a clap along at the start of it. They even threw a cover of Talking Heads “This Must be the Place (Naïve Melody)” into the mix, keeping it true to form in some subtle aspects, while also turning it into more of a pop/rock song and one that utilized the two and even three-piece harmonies the siblings are capable of.

If you knew it, it was requested that you sung “Cool Kids”—a song about wanting to fit in—at the top of your lungs, and while there weren’t enough die-hard fans there to make it very audible, there was plenty of participation. They eventually brought their decent sized set to a close with “Nothing’s Wrong”, which was utterly explosive at the end, with multiple percussion elements and roaring guitar licks.

Echosmith has already become a fairly big band with a large fan-base thanks to that hit single, and based on this performance, they’re a band who should only continue to gain traction. 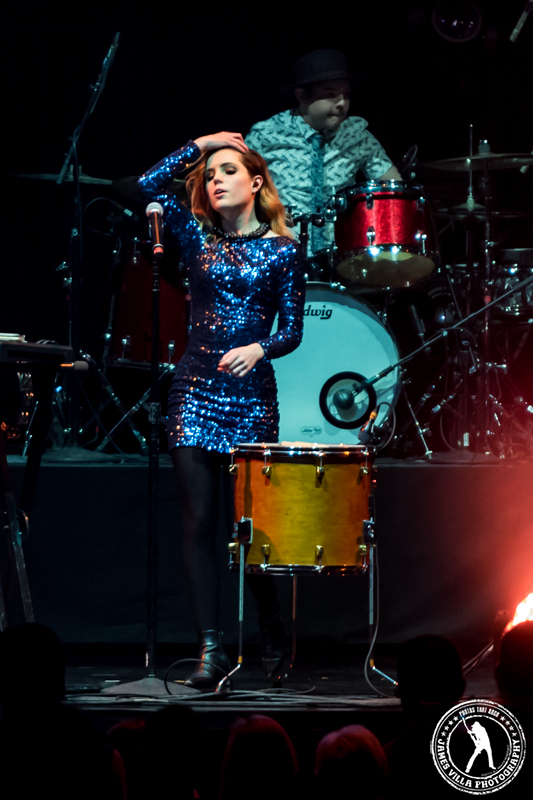 Another set from DJ IRIE filled the time it took to get the stage set for the rock royalty that is Sting; and people started showing up in force before he took the stage.

An odd silence preceded Sting’s arrival; and while there were some North Texas residents in the crowd, the majority of it was Ohio State and Oregon fans who had traveled there. That awkward silence soon faded to a spirited shouting match of “OHIO!” and “DUCKS!”, which, as I overheard a woman behind me point out, made it sound as if they were saying “BUCKS!” instead.

That faded once the band was seen filing on stage; and as Sting approached the microphone, he began crooning into it, making some soft sounds. “I’m not going to start until you sing that part,” he said, a warm, friendly smile being worn on his face. The fans wasted no time lending a hand, which got “Englishman in New York” underway. “Be yourself,” he sang at the latter part, leaving the next line, “No matter what they say,” up to the patrons. Few acts have what it takes to start a sing-along of that magnitude, but, of course, he is one of them, and it made for an amazing moment in general, let alone starting the show.

The entire arena then screamed with excitement as they segued that into the first of several songs from The Police this night, “Every Little Thing She Does is Magic”. A beautiful song that is still every bit as striking and sweet as it was when it first hit airwaves. Upon finishing it, he joked about his appearance. It was hard not to notice the slight beard he was sporting, and he quipped, “…I haven’t joined ZZ Top…”, before mentioning it was time for a love song, which came in the form of “Fields of Gold”. 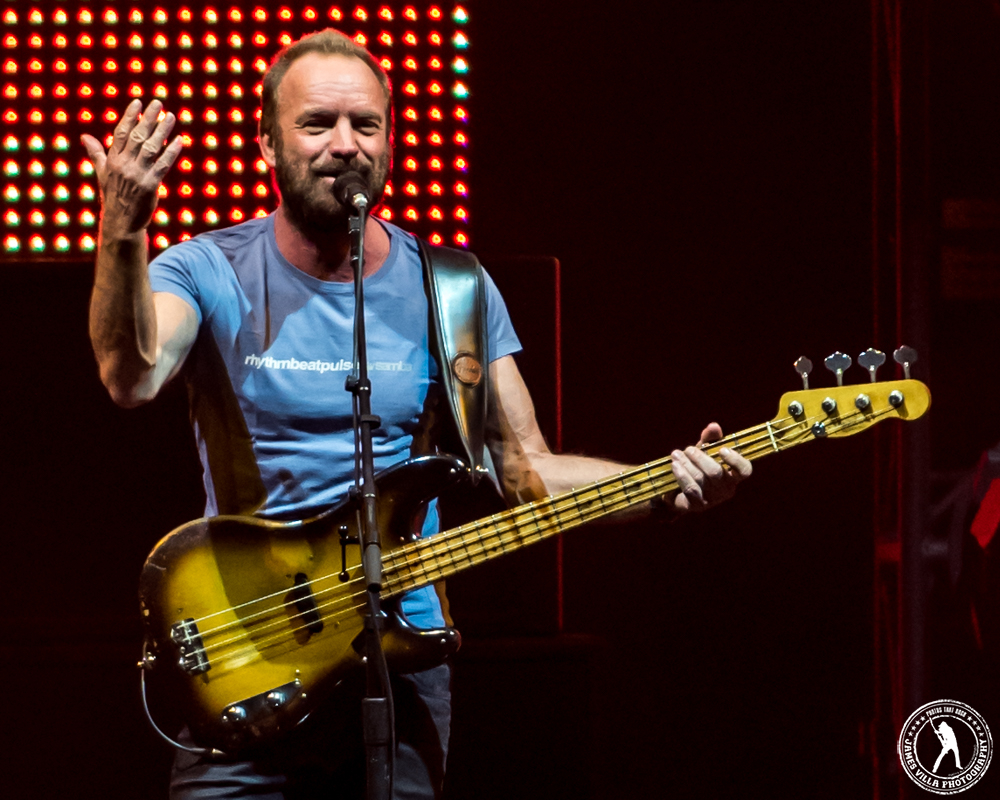 His band, consisting of a guitarist, keyboardist, female vocalist and drummer, was every bit as amazing as Sting was being, and on The Police’s “Driven to Tears”, they really started turning heads, particularly with a fiery key solo during a second instrumental breakdown. Sting then got a little more mobile as they kept those classics coming with “So Lonely”, moving around the stage (which was done partly like the Championship trophy), wandering out on the flank on stage right as they jammed.

As if that weren’t enough, they unloaded “Message in a Bottle” (clearly a fan favorite based on the response) and “Roxanne” pretty close to one another; and that latter one found the female vocalist shining as she repeatedly belted out “Roxanne!” in a fiery tone on what was made into a pretty soulful song. “Desert Rose” was actually one of the other few songs from Sting’s solo career that was played this night, breaking things up briefly, before they finished with “King of Pain” and the moving “Every Breath You Take”.

It was a lovely end to a set that had stretched on for more than an hour, though everyone still wanted more from the icon, shouting just as much until he and his band returned for one final tune, “Fragile”. 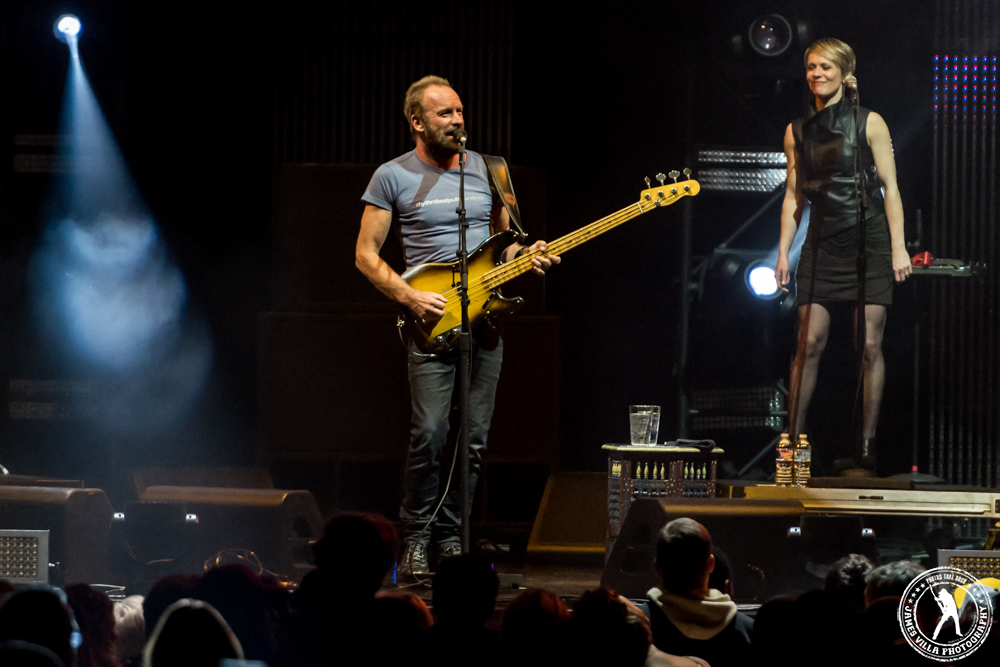 Easily the most remarkable thing about Stings’ set was his voice. This was my first time seeing him live in any format, and at the very least, I imagine his voice is unchanged. “Fields of Gold” is a perfect example from this night. It was so velvety soft and smooth, with just the right amount of force tacked on and it was impossible not to be in awe over it. It has even possibly aged like a fine wine, just getting better.

Aside from that, he and the band rocked out like no other. When they got to jamming, they were totally engulfed in the music, as was the audience, watching in wonder every step of the way.

There’s a reason Sting is a legend. Well, a multitude or reasons, all of which were on full display this night; and he was an excellent choice to close down this weekend.

This is actually the second big college sporting event Dallas has hosted in not even a full year, and the big-ticket acts that have been brought in for both this College Football National Championship and the event last year have been amazing (and my personal favorite part of things in general). Makes me wish more of these took place in this city.