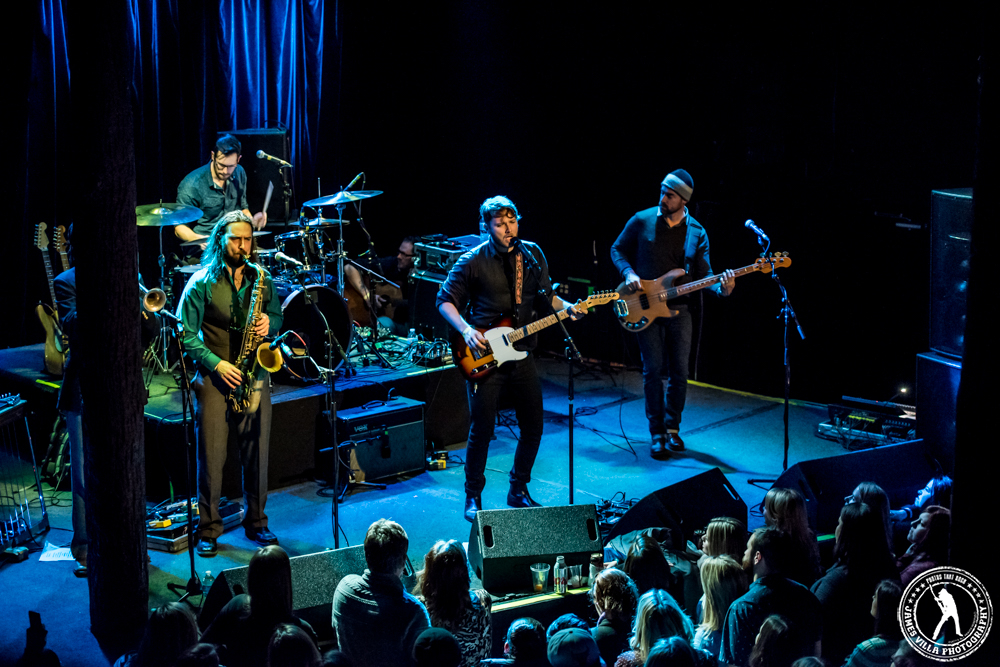 Luke Wade is far from being new to the music scene, though after his recent stint on the seventh season of The Voice, he’s certainly new to a lot of people. While I had never seen Wade before, being entrenched in the local music scene, it was impossible not to have heard the name Luke Wade & No Civilians and had some sort of knowledge of the Fort Worth-based artist. His first Texas show of the New Year was taking place this very wintery night at Trees; and while it may have been cold—with winds that chilled you to the bone—people weren’t deterred. A little over a three hundred people ventured out; and once the curtain opened on Luke Wade & No Civilians a little before ten, they let the band know how excited they were. “Look at all you beautiful people. Thank you for coming out,” Wade told the onlookers, smiling at them as soon as the curtain had opened. He made sure to cater to those who had seen him on TV, though, as it should have been, his primary focus was on his original music. The lead and title track from his newest album (released nearly a year ago now), “The River”, kicked things off. It was hard not to draw comparisons between parts of it and Wade’s own life, as he sang about how life is like a river and you never know where it will take you in a stunningly soulful voice. They swapped between it and 2010’s Tomorrow’s Ghosts; and during “Normal Love”, the only severe technical issue of the night came when his acoustic guitar failed on him. He handled it like a pro though, giving it to a stagehand as he pulled the microphone from the stand and walked about the stage until it was resolved. 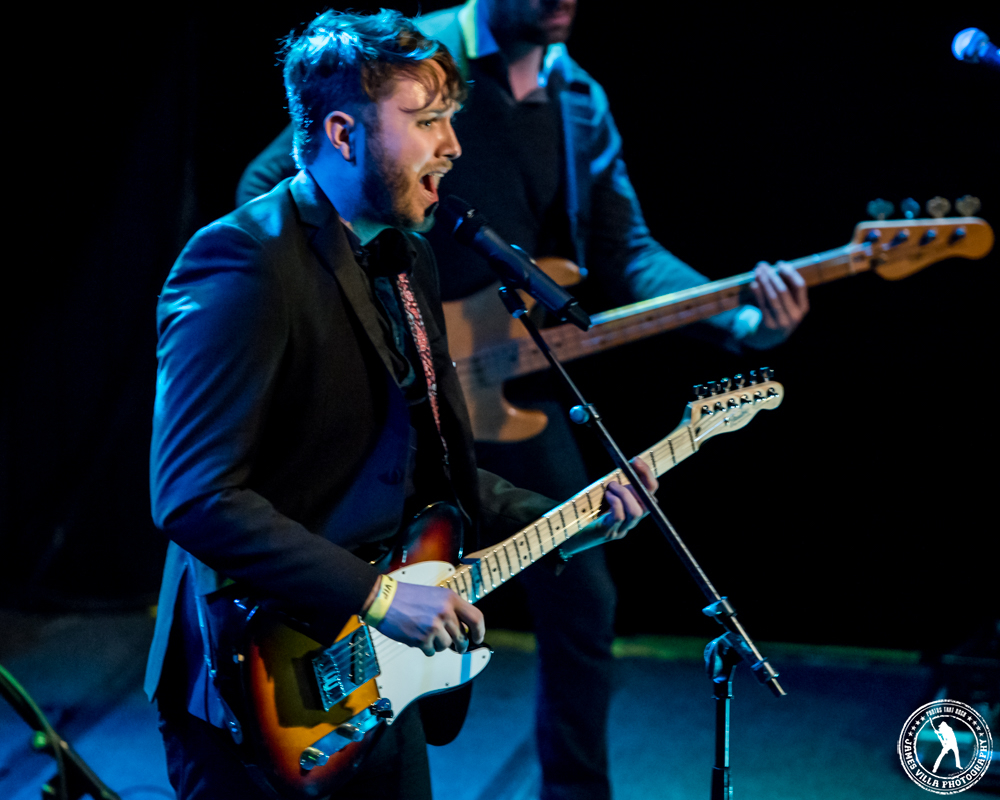 David Wade and Alcedrick Todd (saxophone and trumpet, respectively) had been noticeable this night, dancing along to the music when they weren’t playing, but really came into the spotlight during the bewitching “Doctor, Please” (a song that sounded as if it could have been done by any of the most legendary soul artists). Specifically, it was David who shone on a sax solo; and once it was done, before going any further, Wade mentioned how he hoped this was the beginning of a very exciting time in his and the bands career. “This Fire” was a standout this night. The passion Wade put into singing it was overwhelming, really leaving you blown away; and now that he was free of a guitar, he hopped atop the drum riser at the end, as they segued right into one of the songs he performed on The Voice, “Try a Little Tenderness” by Otis Redding. It was a supercharged rendition of the R&B classic, and they pulled it off incredibly well. Another cover thrown in later was one he didn’t do on the show, but no less dynamic. The Police’s “Roxanne” was the best song up to this point during his 90-minute set, even getting some members of the audience to interact, pumping their fists along with Wade on the choruses. It was a brilliant cover. He didn’t shy away from the sensuous songs either, and the original, “The Runaround”, definitely fit that mold; while their spin on “Maybe I’m Amazed” did the Paul McCartney classic justice. He proved to be a very inspirational figure this night, too, and before doing a very new song, he acknowledged that there is a dark side to everything, even your dreams coming true. In this case, for him, that meant spending a lot of time on the road, and he said he knew he’d encounter the naysayers who would tell him he can’t do this, he’s not cut out for it, etc. However, he said his solace would be found in the fact that so many people, like the ones here this night, have dreams that he will succeed. 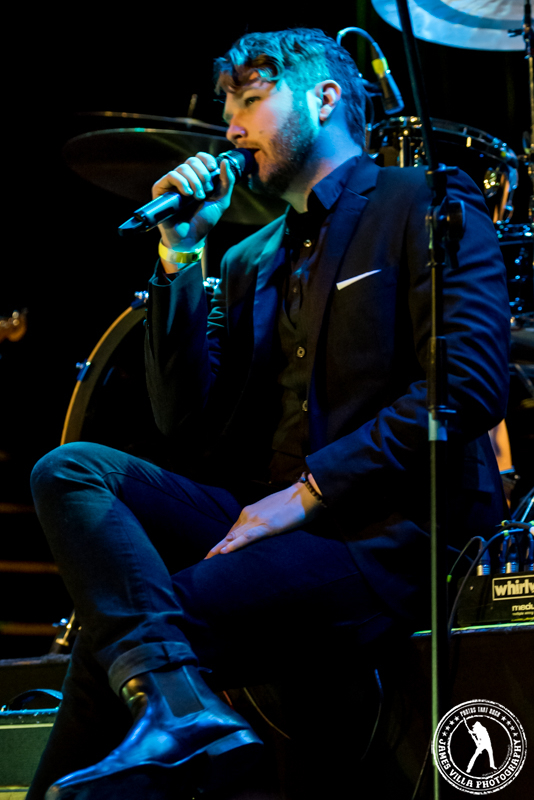 He shared another personal story during “Cool Wind”, thinking back a couple years when he was at a show as a fan of whoever was playing. He said over a thousand people were there, and he put himself in that place, imagining he was the one on the stage, and how if he ever got to that point, he would never not be grateful for those experiences. That timeless Hall & Oates tune, “Rich Girl”, really sent people into a frenzy, creating some movement from the fans, while the band appeared even tighter than they had been all night. Later, the job of closing the show fell to “Life’s a Long Time to Waste”—another cut from The River—and it was fitting to end with, sending the message to everyone that no matter what you love to do, the thing where your true passion lies, you keep after it and things will eventually pay off. It also saw Wade introducing all of his band mates, which also included Paul Jenkins on the bass, David Kurrasch on the electric and pedal steel guitars and Blaine Crews on drums, with each of the five getting time for a solo. Few left, and no one really wanted this night to be over as they made known their desire for an encore. Eventually, Wade returned, though he was the lone figure on stage. The encore came in the form of a song he said was frightening to play, because it was just him in the rawest form imaginable. I can see how that would be daunting, though he never showed it as he strummed his guitar and sang “‘Til the Fighting is Through”, which wrapped things up perfectly. People often forget that there are artists out there putting everything they have into being something, even if something is never more than just a prominent figure in their hometowns.”The next big thing” doesn’t just spring up overnight, there are years of work and effort poured into it that is never known to most of the world. Such is the case for Luke Wade. Whether or not he will be “the next big thing” is up in air at this point. He was fortunate to get a platform in front of a large portion of Americans, and only time will tell if it pays off or not. However, this night, I saw a performance that was solid throughout and never hit any soft spots where you were left only half-paying attention. Obviously, that’s a great quality to have. However, even more important is the fact that Wade is clearly so driven and passionate about what he is doing, and that will carry him a long ways.