Slipknot’s KNOTFEST, the most cutting edge heavy music festival in America–has announced new details about the onsite attractions and activities for fans at the October 24-26 destination festival held at San Manuel Amphitheater & Campgrounds in San Bernardino, CA. From the Slipknot-curated Slipknot Museum to anonsite tattoo parlor, flaming carnival games, and even the unforgettable Scent of KNOTFEST, the festival promises an epic experience for Maggots and metalheads even apart from the five stages of earsplitting music.

KNOTFEST’s massive lineup features some of the biggest names in metal–including Slipknot, Danzig, Five Finger Death Punch, Volbeat, Of Mice & Men, Anthrax and dozens more–playing on five stages on Saturday and Sunday. A Friday night VIP Pre-Party Bash will feature exclusive performances from Suicide Silence, The Black Dahlia Murder and more, as well as other activities for those that have purchased VIP or Camping Packages.

As previously announced, Slipknot will close Stage 001 both Saturday and Sunday, with unique sets each night, featuring brand new music and an entirely new stage set and experience. In addition, all KNOTFEST online ticket purchasers (and those that purchase tickets before October 5 to Slipknot’s headline tour with Korn and King 810) will receive a digital download of the new album, delivered 24 hours early. 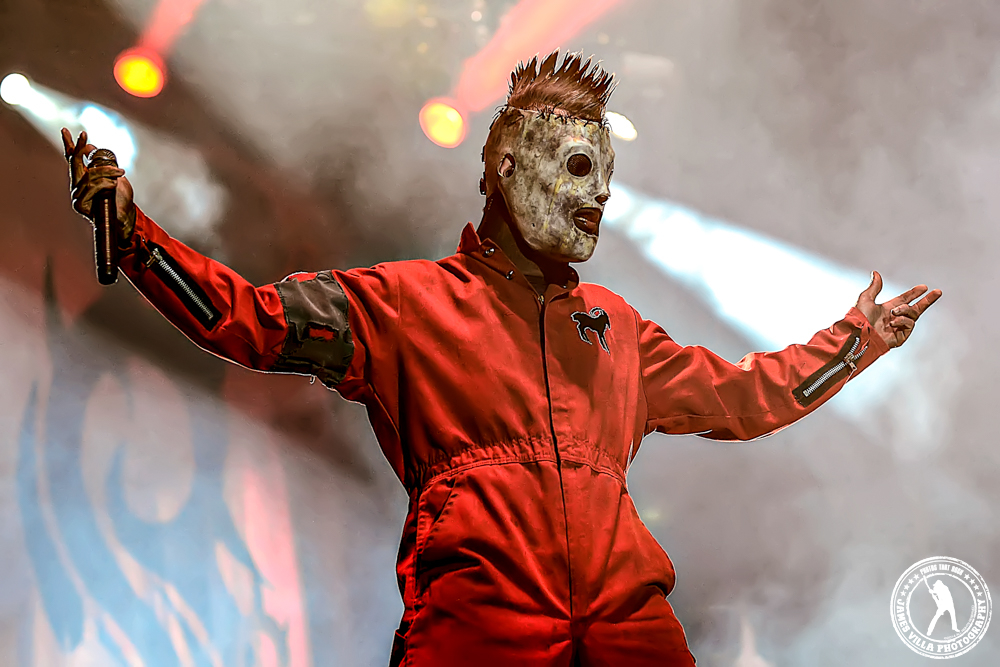 KNOTFEST will be home to over 30 vendors selling a variety of lifestyle items to enhance the festival experience and beyond. In addition to various vendor promotions, offering multiple visual surprises, and will present the following onsite activities and attractions:

A tented museum curated by the members of Slipknot themselves. Slipknot’s history on display to include priceless Slipknot artifacts such as masks, suits, art, previously used equipment and other memorabilia from the members themselves personal archives and home garages.

There is nothing choreographed about the THUNDERDOME. Two fighters step in and fight until one taps out. Nightly fights throughout the festival.

Straight from the bowels of hell is the Fire Zone, displaying a pyromaniac’s wet dream, with fueled performances throughout the festival day and night.

30+ costumed pagan performers roam around festival adorned as different creatures tapping into your nightmares. Included in these performers will be firewalkers, fire breathers and sword swallowers…

For the first time ever at an American festival, the Zipline will scream across the upper section of the festival area, allowing you to fly over fellow KNOTFEST fans below at high speeds. There will be a low cost per ride.

Ripped straight from the memories of Clown’s childhood at the Iowa State Fair is the Ring of Fire. Not for the faint of heart or stomach! There will be a small cover charge per rider.

KNOTFEST has its own aroma that will infest your brain, body and clothes for days after the festival is over. Personally picked by Slipknot themselves, the smell of KNOTFEST will permeate the festival grounds. Oil drums will be filled with camel shit and oil, set aflame to last the entire festival.

Goats will freely graze in the heavy-petting zoo, where KNOTFEST attendees can get close to their horned spirit animals.

What festival experience would be complete without a KNOTFEST tattoo? A world-renowned tattooist will be onsite to tattoo you and leave a memory to last a lifetime.

Beat on junkyard cars with other KNOTFESTERS throughout the festival hours and into the night. A repeat from year 001, Clown also will play host to a drum circle on junkyard cars. Festivalgoers will join in, and beat the crap out of the cars with metal pipes, poles and whatever else they deem fit.

Interactive midway style games that incorporate fire, such as a fire-belching tarot card reader or highstriker that shoots 50 foot flames into the night sky!

KNOTFEST tickets are on sale now and going fast at www.knotfest.com. A limited number of VIP packages are still available. Camping packages and pit tickets are SOLD OUT.