So, something really weird happened at the Mayer Hawthorne show last night. Now, that’s not to say that weird things never happen at other live shows, and it’s certainly not to say that the weird things that do happen don’t always affect the outcome of the show as a whole. But this particular incident was so strange and spectacular that it has totally compromised my ability to write an objectively geared review of Hawthorne’s performance.

That’s why I’m not going to write an objectively geared review. I’m going to deliver an objective concept of his show, and then I’m going to tell you about the incident that dismantled the review. Okay? Okay. 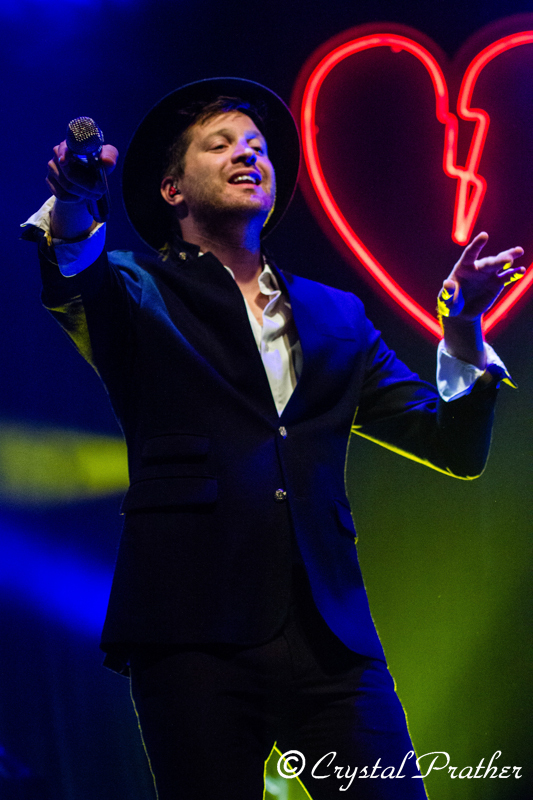 THE OBJECTIVE UNDERSTANDING OF MAYER HAWTHORNE:

By now, a myriad of comparisons have been made between Mayer Hawthorne and the never-tire neo-soul genre he so effortlessly occupies, but those comparisons usually generate questions about his intent. Naysayers suggest he is riding on the coattails of artists like Justin Timberlake and Rafael Saadiq, and for the most part, their argument isn’t unfounded. Up until Hawthorne’s 2013 full-length album Where Does This Door Go, not much of a case had been made for his versatility as an artist.

That’s why Hawthorne is the first to admit that, in order to establish ground in the genre, he had to do his best to step away from it completely.

“I took all the rules that I had and I threw every single one of them out,” Hawthorne told Spin Magazine July 16, 2013. “Left to my own devices, I would have ended up with an album that sounded very different than this.”

Which would totally explain why Where Does This Door Go has garnered such holistically positive reviews by critics and concertgoers alike. Hawthorne has developed into a multisensory talent with flexibility to spare, and last night at the Granada Theater, the proof was in the pudding.

Hawthorne took stage promptly at 9:05 p.m. and was only out-dressed by his four band members, all of whom impeccably sported a black-suit/black-tie combo that would have made Timberlake about-face immediately. Capitalizing on his signature around-the-world soul croon, Hawthorne delivered hit after hit, beginning a mile-long stint of crowd-pleasing tunes with WDTDG opener, “Back Seat Lover.” After a momentary 16-bar cover of Bell Biv Devoe’s “Poison,” Hawthorne launched seamlessly into, “No Strings,” an instantly gratifying testament to his unrelenting need for and devotion to female attention.

After an hour-long set, Hawthorne and gang returned for a three-song encore, at which point a giant circular contraption was carted onto the stage by two surly gentlemen roughly the size of two Mayer Hawthornes each. After widespread crowd confusion, Hawthorne explained that the contraption was, in fact, a mount holding (what I believe was) 18 Go-Pro cameras, each of which capturing a different angle and aspect of his show. Long story short: the Granada Theater was the site of Hawthorne’s newest music video.

Okay, that concludes the objective concept of Hawthorne’s show.

THE WILDLY STRANGE INCIDENT THAT COMPROMISED MY ABILITIES:

I went with my friend Rod, who is a massive proponent for and devotee of good music but has incidentally not been to a live show in some years. We arrive at the Granada shortly before Hawthorne takes stage, and we run into another friend of mine, Lesley. Lesley informs me that she has friends who have set up shop center-stage in the front-row area of the Granada. She concluded this observation by declaring that, “there is plenty of room up there for all of us.”

I’m a follower, so I followed.

We made it all the way up with zero altercation, and sure enough, we were mere feet from Hawthorne.

As Hawthorne took stage, it became clear to me that we were unnecessarily close to him. I poked his black Sperry Top-Sider with my finger at one point just to prove that I could.

Shortly after his first song, Hawthorne revealed three red Solo cups with ice in them, followed shortly by a can of Canada Dry Ginger Ale and a 1.75-Liter bottle of Hennessy. He then filled each Solo cup with 2/3 Hennessy and 1/3 ginger ale.

He sipped from the middle cup. He gave the left cup to a member of the front-row section to my left. And he gave the right cup to me.

Mind you: this happened AFTER THE FIRST SONG. There was no way on earth I would have been able to provide an accurate, impartial review of his show after that. It was far-and-away the most ridiculous Granada-related show experience of my life.

Good chat, guys. That felt good to get off my chest.