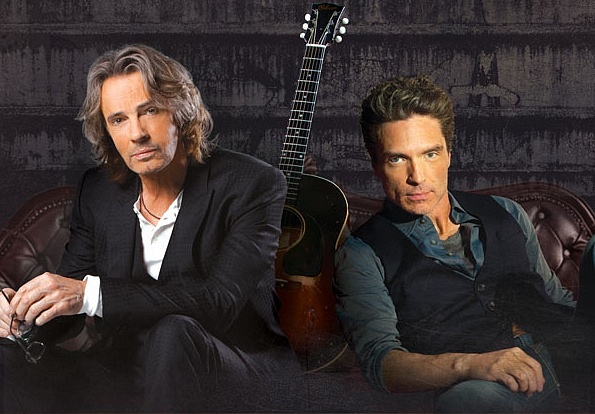 Coming to Majestic Theatre on October 5
Tickets On Sale Friday, June 23 at 10AM 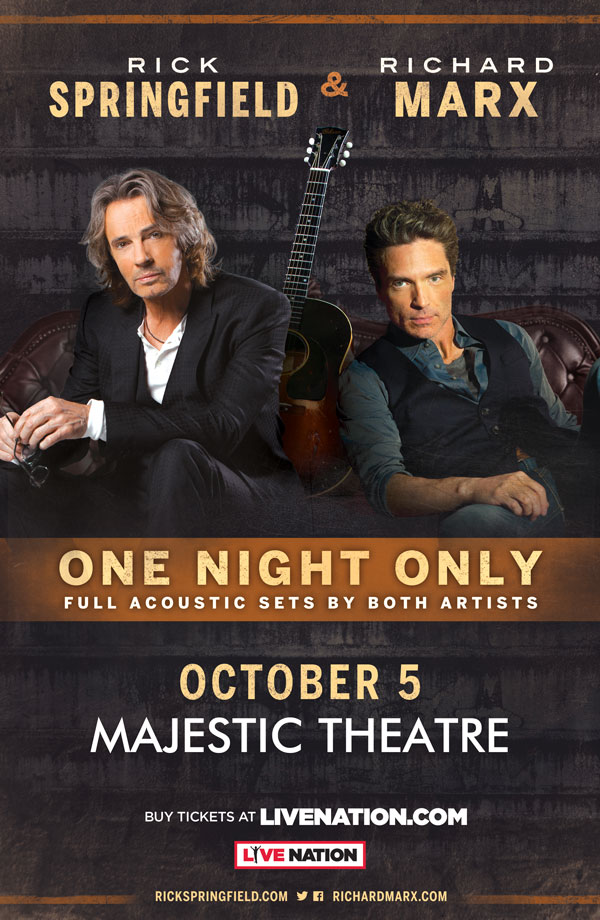 About Rick Springfield:
Over the past three decades, Rick Springfield has worn many hats as an entertainer and performer. The creator of some of the finest power-pop of the ’80s, he’s a Grammy Award-winning singer, songwriter, and musician who has sold 25 million albums and scored 17 U.S. Top 40 hits, including “Jessie’s Girl,” “Don’t Talk to Strangers,” “An Affair of the Heart,” “I’ve Done Everything for You,” “Love Somebody,” and “Human Touch.” He’s an accomplished actor who most recently starred opposite Meryl Streep in the feature film Ricki and the Flash and gave a chameleonic performance as the creepy Dr. Pitlor in HBO’s prestige drama True Detective. He’s also a talented author — both his candid 2010 memoir Late, Late at Night (which Rolling Stone named one of the 25 greatest rock memoirs of all time) and his 2014 comedic novel Magnificent Vibration earned rave reviews and spots on the New York Times Best Sellers’ list. In 2013, Springfield wrote and recorded “The Man That Never Was” with Dave Grohl for the soundtrack to Sound City — the Foo Fighters’ frontman’s documentary about the San Fernando Valley recording studio that was Springfield’s home away from home (his manager owned the building). Rolling Stone called Springfield’s touching interview in the film its “breakout story.” In 2014, Springfield was honored with a star on the Hollywood Walk of Fame, located around the corner from the first apartment he lived in when he first arrived in the U.S. from Australia in 1971.

That Springfield has not only enjoyed longevity, but remained vibrant and relevant at a time when many veteran artists would be resting on past laurels led Rolling Stone to dub this stage of his career “The Rickonaissance.” “I guess it may appear like that, but in my head, I’ve never really left,” Springfield says. “I think it’s really important to stay connected to the vitality of your career. I have a certain pride that I’m not a total nostalgia act. I’ve never been the guy who hung the platinum albums on my walls because, to me, it was looking back. I’m very passionate about moving forward. I have to write new music. I have to record. I’m always working on the live shows. I have to always be working, otherwise I think I’d just turn to smoke and disappear.”

Springfield’s latest musical effort is Rocket Science, his 18th studio album, which he will release in February through Frontiers Music. Written largely with his longtime collaborator and former bass player Matt Bissonette, the album delivers the expertly crafted wide-ranging pop-rock songs Springfield is known for. “I wanted the album to be very open and electric — rock and roll with some country elements, and always with great hooks,” he says. The lyrics largely address matters of the heart with the irreverence, wit, and dark humor that has always permeated his work. “The songs usually start with titles for me,” Springfield says. “A title will catch my eye and inspire a lyric. Both Matt and I are happily married, but there’s some heartache on this one. You can’t just write about how everything is all good and bore people out of their minds. When different emotions come up, I just go with that. I don’t set out to write about anything in particular. I just look for something that feels true and that I can hopefully say in an interesting way.”

While on a rare vacation in Tahiti, Springfield wrote the rollicking first single “Light This Party Up,” which he describes as “a song about redemption and how life sometimes feels like one long fall from grace.” He wrote “Down,” a song about disillusionment and commitment, with Rascal Flatts’ Jay DeMarcus while traveling on DeMarcus’ tour bus to Atlanta, where the two were filming an episode of Drop Dead Diva. “Jay came up with the title ‘Down’ and we were off to the races,” Springfield says. “By the time we were halfway to Nashville the melody and structure of the song were complete, as if by magic. I love it when that happens.” Written with Bissonette, “That One” has a vulnerability characteristic of Springfield’s most emotionally resonant songs. “Who of us hasn’t had some heartless lover crap on us and our tender feelings?” he says. “This song hits home for me both as the protagonist and the victim. I have been both the crapee and the craper, I’m ashamed to admit.” A dobro guitar lends down-home flair to the rock stomper “Miss Mayhem,” which Springfield wrote with The Hold Steady’s Tad Kubler. “Ah, Miss Mayhem,” he says. “We have all met her or him at some point in our romantic past. A burning hot, amazing-in-bed, beautiful/handsome, wack-job!” Songs like “Pay It Forward,” “Crowded Solitude,” and “We Connect” are imbued with a sense of spirituality that has been reflected in Springfield’s songwriting since his album Living in Oz. “I’ve been sneaking it in there since 1983,” he says.

Music has always been a healing force in the Australian-born Springfield’s life. The son of an Army officer, Rick and his family moved every two years. “Which meant every time I made a friend, I knew I’d be leaving him,” he says. “It was super stressful for me. I’d go to a new school and go through the trauma of trying to fit in.” Books and records became his savior. Then at age 11, he encountered his first guitar. “This kid brought one to a Christmas fair at my school in England and it was the most beautiful thing I had ever seen,” Springfield recalls. “He let me hold it. I hit two strings and the two strings happened to be the first couple of notes of the theme song to my favorite cowboy show at the time, Cheyenne. I realized instantly I could play the guitar. Some guys fall in love with cars, some with football teams. I fell in love with guitars.”

It has been a long and fruitful affair, and one that has gifted him with a powerful connection to his legions of devoted fans, who pack his annual fan getaway events, as well as the nearly 100 shows a year he performs both with his band and solo in an intimate “storyteller” setting that he captured on the 2015 CD/DVD and concert film Stripped Down. Though too self-deprecating to discuss his immense appeal, he will acknowledge that the fans connect with him through the music. “I guess they think I’m honest,” he says. “They must like my approach, what I write about. I think they like that I have a sense of humor in it at times. Because the ‘cute’ thing isn’t going to last forever.”

About Richard Marx:
As a performer, songwriter and producer, Richard Marx’s nearly three-decade-long career has had innumerable highlights. The Chicago native has sold more than 30 million albums worldwide, starting with his self-titled debut which went to #8 on the Billboard Top 200 chart and spawned four Top 5 singles, including the chart-topping “Hold on to the Nights,” and “Don’t Mean Nothing” which earned him a Grammy nomination for Best Male Rock Vocal Performance. The follow-up, 1989’s Repeat Offender, was even more successful, hitting #1 and going quadruple-platinum with two #1 singles in “Satisfied” and “Right Here Waiting.” When both Rush Street (with two #1 AC hits in “Keep Coming Back” and “Hazard”) and Paid Vacation (with its #1 AC hit, “Now and Forever”) went platinum, Marx achieved a seven-year string of triumphs that rivaled any in pop-rock music history. To this day, he is the only male artist in history to have his first seven singles reach the Top 5 on the Billboard charts.

For most artists, that would be impressive enough – but Richard Marx didn’t stop there. He launched a second, very successful, incarnation as a songwriter and producer, with songs like “To Where You Are,” the first hit single from Josh Groban’s debut album, as well as the NSYNC smash, “This I Promise You.” He went on to earn a 2004 Song of the Year Grammy for co-authoring Luther Vandross’ “Dance with My Father.” Across all formats, Marx has scored an amazing total of 14 #1 singles (including Keith Urban’s #1 smash “Long Hot Summer”) both as a performer and songwriter/producer, making him a true multi-talented performer who continues to challenge himself and his fans. He has also written with Jennifer Nettles, Sara Bareilles and Vince Gill. He holds the honor of being one of a handful of artists who have had a number one hit in each of the past four decades.

Marx’ My Own Best Enemy, was released in 2004 and featured the hits “When You’re Gone” and “Ready to Fly.” In 2010, he released Stories To Tell, a greatest hits album which produced a Top 20 AC hit in “When You Loved Me.” In 2012 he released his first ever Christmas album, Christmas Spirit.

On July 8, 2014, he released his eighth album, Beautiful Goodbye, featuring all new material. Fans may find Marx’s eighth studio album, a bit of a departure from his previous albums. According to the Grammy Award-winning singer/songwriter, he set out to make a deliberately sexy album. “The songs on this record were influenced greatly by everyone from Sade to Bebel Gilberto to various EDM artists to even Chopin. I’m known for romantic music in the past, but this music I wrote is all more sensual and ethereal, and the lyrics are more adventurous than I’ve been willing to go in the past.”

All the tracks on Beautiful Goodbye are written and produced by Marx except “Getaway,” co-written and produced with Walter Afanasieff; “Forgot To Remember” co-written with Vertical Horizon frontman and frequent Marx collaborator, Matt Scannell; “Turn Off The Night” co-written with multi-hit songwriter David Hodges, and the title track, co-written with Daisy Fuentes.
Richard has made a commitment to several different causes, from donating the royalties from his hit single, “Should’ve Known Better,” to build a room at the NYU Medical Center for pediatric cancer patients, to his recording of “Children of the Night,” which brought attention to the plight of homeless children on the streets, raising more than $500k for the Children of the Night Foundation. Marx has also performed benefit concerts over the years for the TJ Martell Foundation, Toys for Tots, Make a Wish Foundation, the American Cancer Society, Best Buddies and the Special Olympics. Richard and his band entertained the U.S. troops stationed in Germany and, since 2008, he has hosted an annual event in Chicago for the Ronald McDonald House Charities, the first of which featured a concert by Richard and Kenny Rogers. Richard has also organized an annual all-star benefit concert for the Cystic Fibrosis Foundation, raising more than $4 million for research to cure the disease.