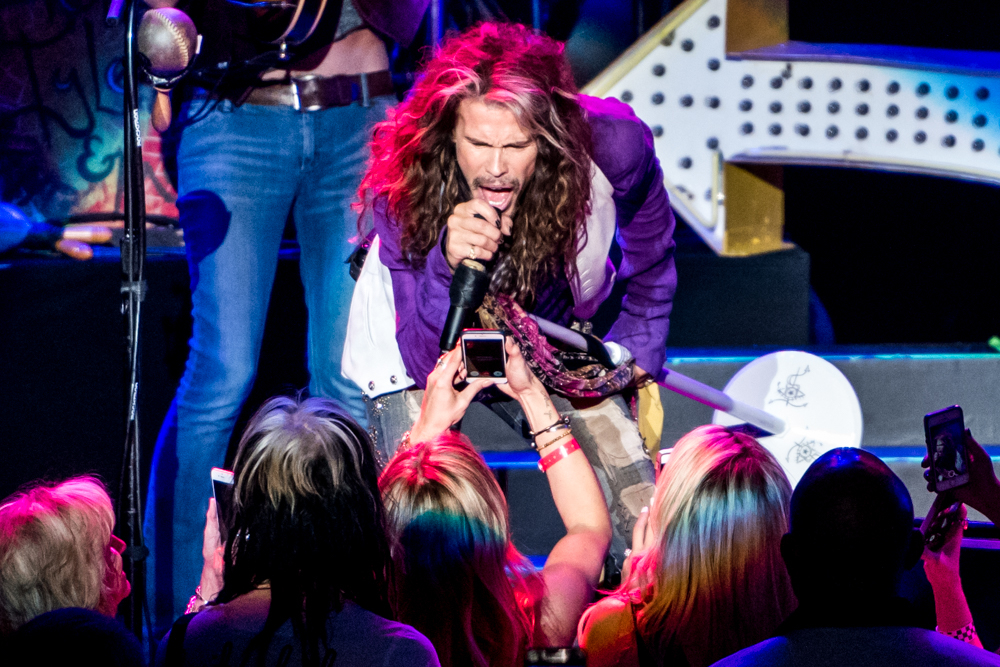 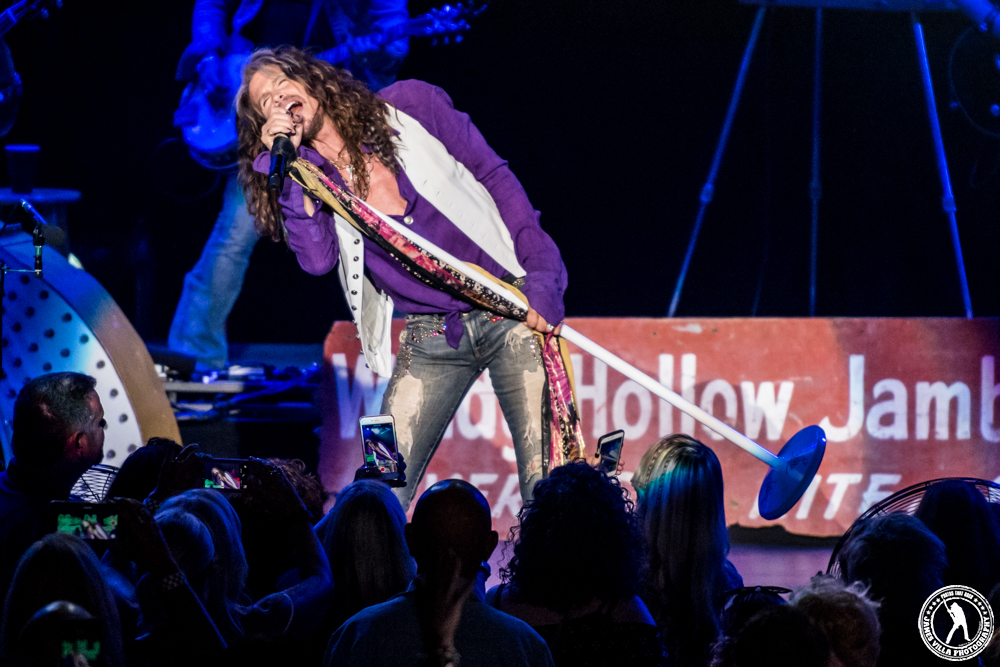 The rock legend that has spent more than four decades fronting Aerosmith is working on branding himself as that for his solo career, the newly released We’re All Somebody from Somewhere mining more of a modern country sound. And on this Monday night he was bringing the …Out on a Limb Tour to Dallas to give fans a taste of what his new style is like.

The venue that more often than not hosts musicals was pushing capacity, the eclectic crowd (there was about a forty-year age difference between the youngest and oldest groups of people I saw) filling up early in anticipation of the eight-o’clock start time. Quite unsurprisingly, it didn’t start on time, the extra fifteen minutes being easy to shrug off.

The audience was first treated to snippets of old interviews Tyler has given in years past, and after a couple minutes out walked the man himself, mic stand in hand as he sat it down at center stage. 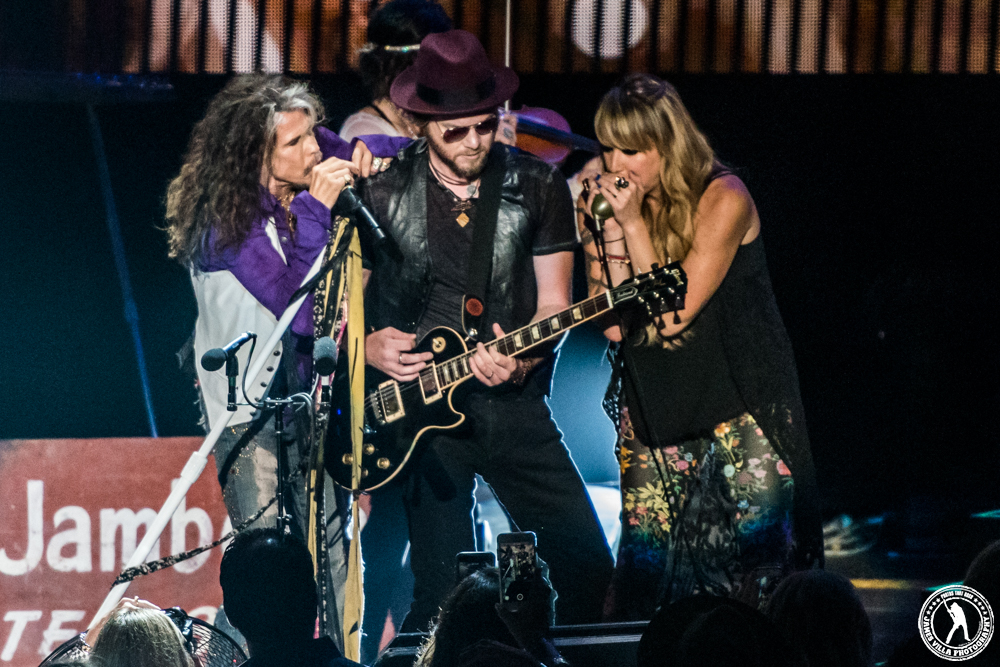 The Loving Mary Band backed him, with Suzie McNeil leading the cast of instrumentalists (and occasionally backing singers) that brought anything from a banjo to a mandolin and fiddle, along with the traditional drums and guitar to the mix. Tyler himself called this new sound of his a hybrid of genres and that was what the performance felt like as well. That certainly wasn’t a bad thing as far as the audience was concerned.

Retooled Aerosmith classics were featured prominently, making up the bulk of the show; “Sweet Emotion” kicking off the performance and making you think you were in for that kind of rock spectacle.

Aside from songs t hat he’s known for and new music, Tyler also injected a sort of storyteller vibe into the show, part due to frequent chatting with the audience, telling them about his past, to mentioning bands that influenced him in his youth, leading to covers, like The Beatles “I’m Down” and “Come Together”. (Both of which Aerosmith is also known for having recorded versions of.)

It all worked though, creating a fascinating flow to the performance, the various revamped classic songs (both ones he did and didn’t have a hand in writing) fitting well with newer ones; the catchy “We’re All Somebody from Somewhere” having the crowd moving around just as much as “Sweet Emotion” had. 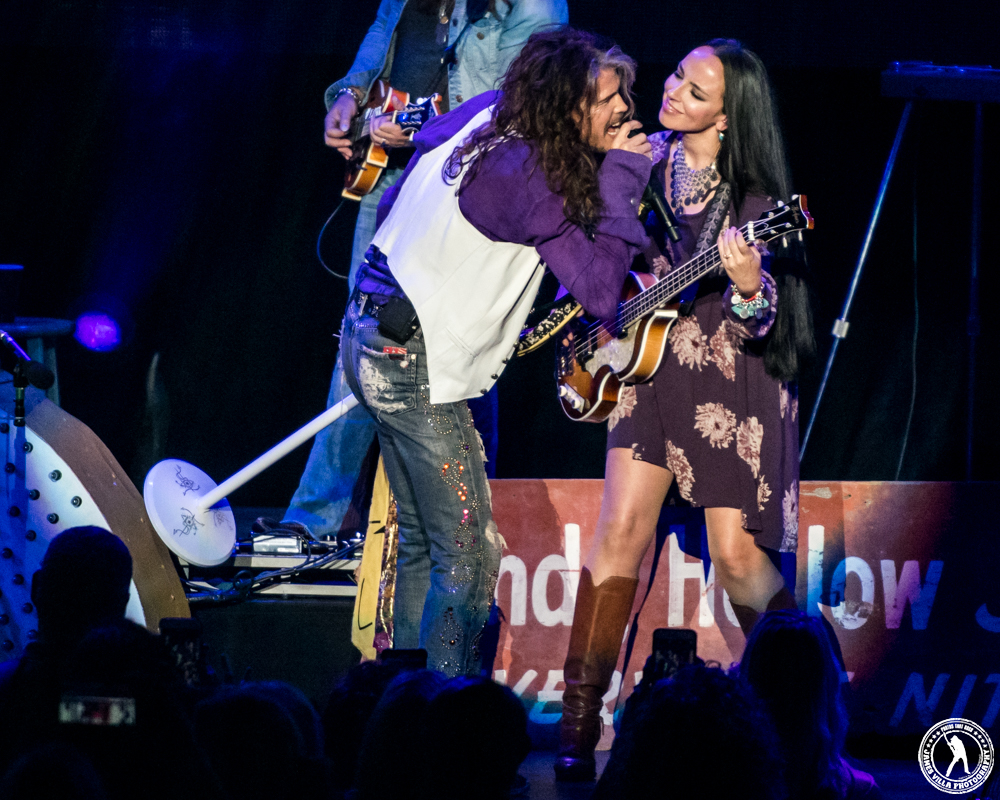 “Love is Your Name” was one highlight from the new record, while “I Make My Own Sunshine” was an enjoyable tune as well. “My Own Worst Enemy” felt to be one of the most personal ones of the night, the subject matter centering around Tyler’s battles with addiction and conquering it.

It was an interesting array of material before the near hour and a half long set concluded in a very similar fashion to how it had begun, “Dream On” and “Walk This Way” seeing the entire music hall going crazy. (One guy — who probably hasn’t even been around half as long as “Dream On” has — acted like it was his lifeblood, thrashing around and getting quite animated as he waved his arms around.)

It wasn’t long before Tyler returned to get the encore portion going, some reverb and other vocal effects aiding his already impressive voice as they launched into striking new take on “Janie’s Got a Gun”; while another staple Aerosmith fans know well, Tiny Bradshaw’s “Train Kept A-Rollin’”, sounded spectacular formatted more as a country jam. A blazing fiddle kicked it off, while McNeil showcased her harmonica skills one last time for the night, absolutely owning it as they brought things to a fiery finish.

I don’t know how much of a country show this was. Sure, some of the instruments fit with traditional country, and at times, they even sounded like that, but for the most part, it was a fusion of what Tyler does best and what he wants to do on his own. His voice is built for rock ‘n’ roll, and sounding just as amazing as it always has, he gave it everything he could, still hitting the high notes with absolute ease when they came around.

Despite all of the wear and tear he’s put on it, the quality hasn’t diminished; and he made sure everyone was fired up, parading around the stage, swinging his mic stand around and even occasionally interacting with fans up front, shaking some hands or even briefly speaking to a couple of them.

Tyler did say he felt country was the new rock. Maybe it is, maybe it isn’t, that’s a call that everyone can make on an individual basis. But one thing everyone would agree on, he sure made it feel and look like country is the new rock this night. The fans left having heard an interesting side of him but one he sounded confident and comfortable in performing, as he executed just the type of performance spectators had been hoping for, making it well worth venturing out on a Monday night.