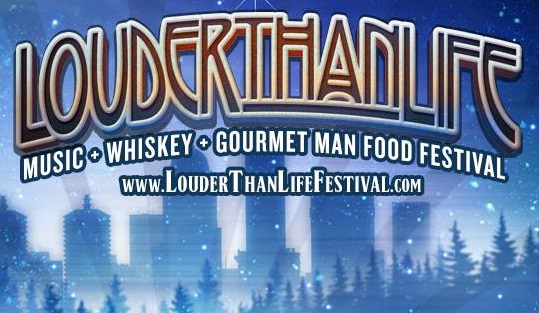 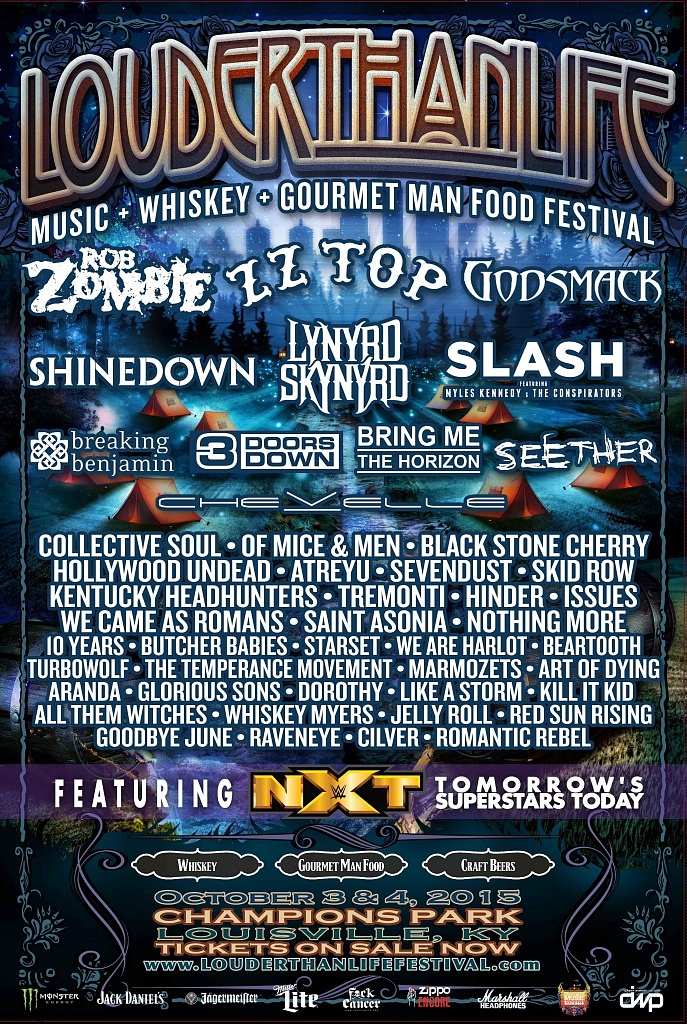 LOUDER THAN LIFE returns to Champions Park near downtown Louisville October 3 & 4, 2015 for the second annual celebration of the region’s culture and cuisine, once again featuring award-winning bourbons and spirits, Gourmet Man Food, and a powerful music lineup.

LOUDER THAN LIFE is expanding in 2015 by adding another stage. This year’s bands will perform on four stages, while attendees will enjoy bourbon exhibitions and sampling, along with more than 70 food and beverage vendors that will help celebrate the bourbon culture and culinary heritage of this unique American city. In addition to music performances, LOUDER THAN LIFE will feature live, in-ring matches with WWE®’s NXT Superstars, as well as interactive experiences such as artist autograph signings at the Monster Energy Hospitality Rig, the Monster Energy viewing area with beverage sampling, The Crazy Dave’s Music Experience, Jack Daniel’s Experience, and Zippo Encore Music Experience.

ZZ Top’s Billy F. Gibbons says, “We’re amping up about making the show at Louisville’s LOUDER THAN LIFE. It’s a win/win/win with rockin’ and rollin,’ terrific cuisine, and downright downable drinks. Even while performing we’ll make way to check it out.”

Festival producer Danny Wimmer says, “It isn’t often that a lineup comes together to represent a multigenerational greatest hits playlist — but I think that is exactly what I was able to accomplish with the bands playing this year’s LOUDER THAN LIFE. I’ve also been working hard with our participating chefs to add even more flavors and surprises to our selection of Gourmet Man Food. And with the very best that Louisville and the region has to offer from its distilleries and breweries, I am proud to say that this festival will have something for everyone.”

Louisville Mayor Greg Fischer said, “Louisville is home to some of the world’s best music and food and there’s definitely only one area to come to for bourbon, so where else would you have a festival experience such as LOUDER THAN LIFE? We’re excited that we can host this great event in such a super venue down by our waterfront and show all the music, food and bourbon fans what our city and people are all about.”

Here are the preliminary lists of LOUDER THAN LIFE bourbon, craft beer, and Gourmet Man Food partners, as well as festival experiences:

WWE’s NXT: LOUDER THAN LIFE will feature live, in-ring matches with WWE’s NXT Superstars.  NXT is WWE’s developmental division based out of the state-of-the-art WWE Performance Center in Orlando, Florida. Over the past two years, NXT has grown into one of the hottest sports entertainment brands in the world, featuring incredible athleticism and compelling storylines that can be seen every Wednesday night at 8:00 PM ET on the award-winning WWE Network.

A special rolling ticket pre-sale at www.LouderThanLifeFestival.com will start on Monday, June 15 at Noon ET and run through Friday, June 26 at 11:59 AM ET (or when pre-sale tickets sell out). During the pre-sale, a limited number of weekend discounted General Admission and VIP tickets will be available for purchase. The pre-sale ticket prices are as follows:

(Note: All other pre-sale prices remain the same throughout the pre-sale, while supplies last.)

Hotel, camping and VIP packages will also be available for purchase during the pre-sale.

Regularly priced tickets go on sale Friday, June 26 at Noon ET at www.LouderThanLifeFestival.com. Tickets will be priced as follows at that time: