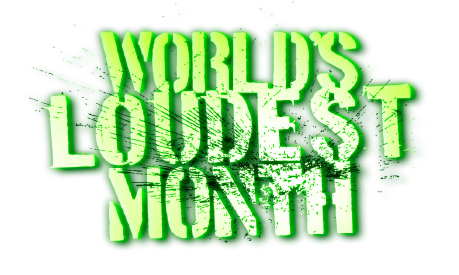 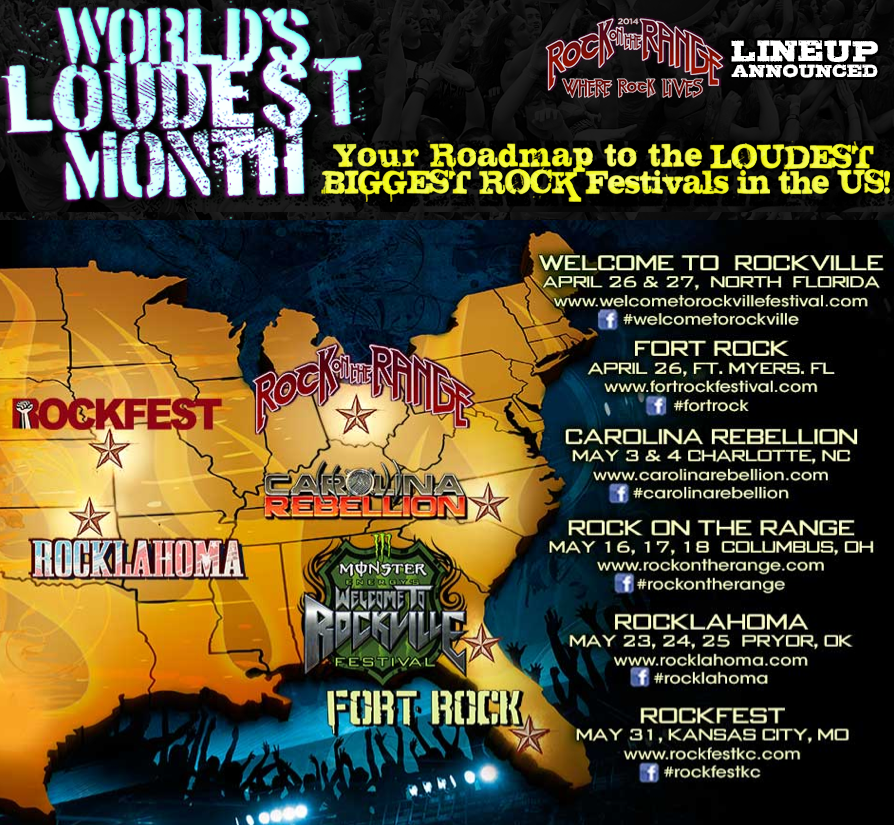 More than 426,000 fans came out for the 2015 World’s Loudest Month festivals across the U.S. between April 25 and May 30, breaking last year’s attendance record and solidifying the significance of rock and metal music in America.

“Every year we try to raise the bar for the rock fans around the country with the World’s Loudest Month festivals, and every year those dedicated fans rise to the challenge,” comments Joe Litvag of AEG Live.  “We find it incredibly gratifying that while many may say that rock isn’t cool or hip, hundreds of thousands of loyal rock enthusiasts and hundreds of rock performers would disagree.  The numbers are growing each year and speak for themselves, and we are so grateful to the fans, artists and sponsors who continue to support this underserved genre year after year. If ‘rock ‘n’ roll is dead’ as they say, you could’ve fooled me!”

“Over the past several years there has been an explosion of music festivals in the United States, making it clear that festivals have become a significant force in the American music culture,” says Danny Wimmer of Danny Wimmer Presents. “While this growth is exciting, it puts pressure on organizers to find ways to differentiate their events. By creating the WLM as an association of individual festivals, we have been able to globally celebrate the rock culture but also highlight the uniqueness of each event through the curation of local cuisine, craft breweries and distilleries. The music always comes first, butexpanding the non-musical entertainment offering of each festival has also been a key focus. Whether it’s adding a custom food village, a comedy tent, a tequila world or new activation partners like the Jacksonville Jaguars, each festival continues to find its own personality. What is most exciting to me are the things we have on the drawing board for the future.”

Tickets sold out three weeks in advance for the first-ever Northern Invasion–the newest addition to the World’s Loudest Month festival series–Saturday, May 9 at Somerset Amphitheater in Somerset, WI, just outside the Twin Cities. The new rock and camping festival had 25,000 fans on-hand and featured an unbelievable first-year lineup headlined by global rock juggernauts Slipknot, with a roster of rock heavyweights including Five Finger Death Punch, Volbeat, Three Days Grace, Halestorm, The Pretty Reckless, In This Moment, Anthrax, Falling In Reverse, Motionless In White, Young Guns, Thousand Foot Krutch, We Are Harlot, Starset and Crobot.

Rock On The Range–America’s premier hard rock festival–wrapped its ninth year with 120,000 in attendance for the three-day rock festival held May 15, 16 and 17 at MAPFRE Stadium in Columbus, OH. Festival attendees came from all 50 U.S. states and Puerto Rico, as well as countries including the UK, Canada, Sweden, Denmark, Spain and the United Arab Emirates. Tickets for Rock On The Range were sold out in advance for the third year in a row, this year selling out one month before the festival. Those who were not able to attend America’s biggest rock festival in person were able to tune in to live music’s top cable channel, AXS TV–the official ROTR broadcast partner–to see various performances and band interviews throughout the festival weekend. Rock On The Range generated an estimated economic impact of approximately $25 million for the Columbus, OH region in 2015. The cumulative economic impact for ROTR since its inception in 2007 is approximately $140 million.

2015 marked the biggest audience yet for River City Rockfest, with 27,500 in attendance for the festival’s third year. River City Rockfest featured performances from Linkin Park, Volbeat, Papa Roach, Halestorm, In This Moment, Anthrax, Scott Weiland & the Wildabouts, In Flames, We Are Harlot, Upon A Burning Body and Crobot.

Tickets were sold out with 50,000 in attendance for the 23rd year of Rockfest at Penn Valley Park in downtown Kansas City. This marked the eighth consecutive year with over 50,000 in attendance for America’s largest one-day music festival, whichincluded performances by Rob Zombie, Halestorm, The Pretty Reckless, Anthrax, Volbeat, Papa Roach and Kansas City’s own Tech N9ne.