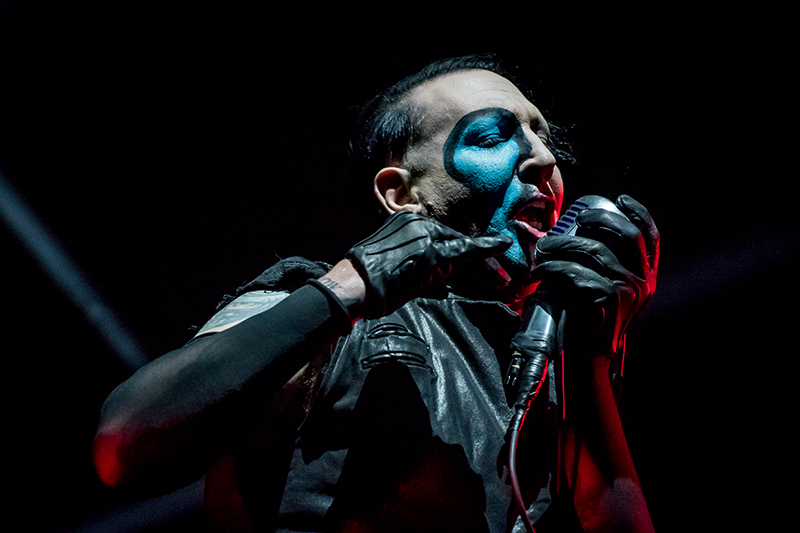 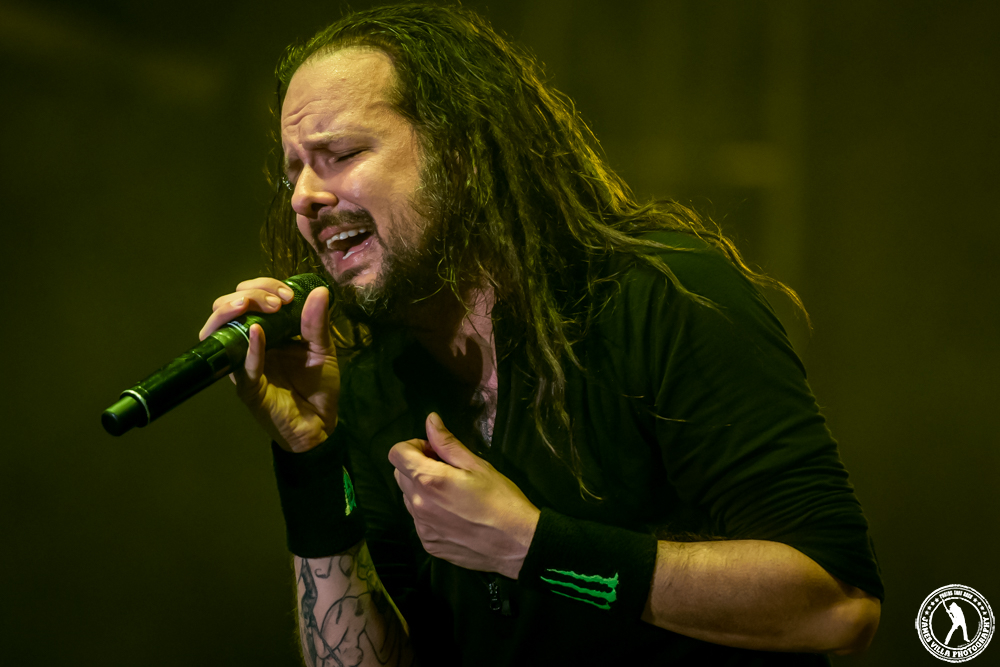 This year’s Monster Energy’s Welcome to Rockville had one of the best lineups since its inception back in 2011. It was surprisingly difficult to choose who to see at any given time, as many of the acts were almost constantly hitting the various stages at the same time.

As part of the World’s Loudest Month, this Danny Wimmer produced festival has relatively quickly gone from a one day event to being a two day extravaganza. This year it expanded its capacity to 50,000 people.  That’s 15,000 more fans than last year’s sold-out event.

This 2015 installment of the fest was quick to capitalize on the additional space by adding a fourth stage well into Jaguar Stadium, allowing for the closure of Gator Blvd. The walking distance between stages was increased slightly but no one seemed to mind. After all, a little exercise never hurt anyone.

Day one started as expected with a beautifully overcast sky, what many would consider perfect weather for a festival; while World Gone, Like a Storm, and Red Sun Rising kicked off the festivities for the 5th Annual Welcome to Rockville. 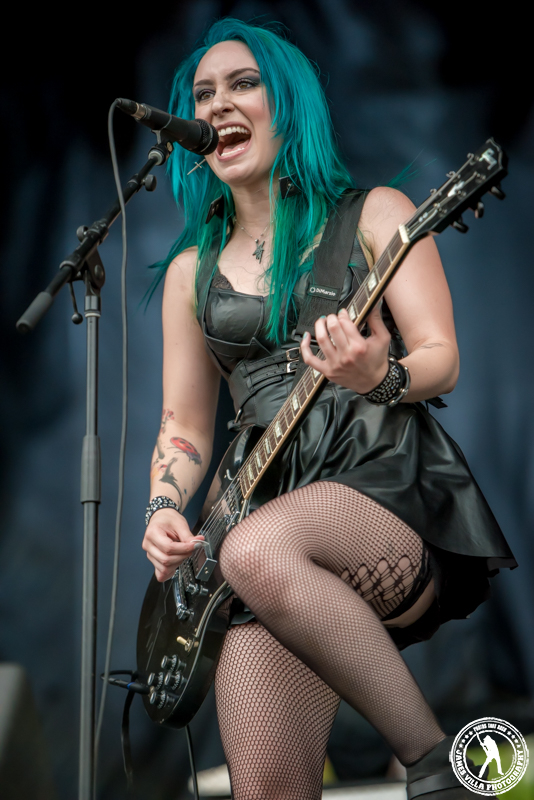 The Monster Energy Stage would quickly become our favorite on this day, as it, in our opinion, had the strongest lineup.  Stars in Stereo’s lead vocalist and guitarist Becca Hollcraft’s had no trouble in getting the crowd going, ripping through their brief set; and after having seen them play several times this year, I was all the more excited to see them yet again. They didn’t disappoint.

This year’s biggest surprise has been NonPoint. Elias Soriano and company’s high-energy stage presence set the bar with many. Their extremely loyal fan base continues to support; and each show seems to see that fan base grow by no less than a couple dozen. Their latest release, The Return, has them at the top of their game and 2015 promises to be an incredible year for them. 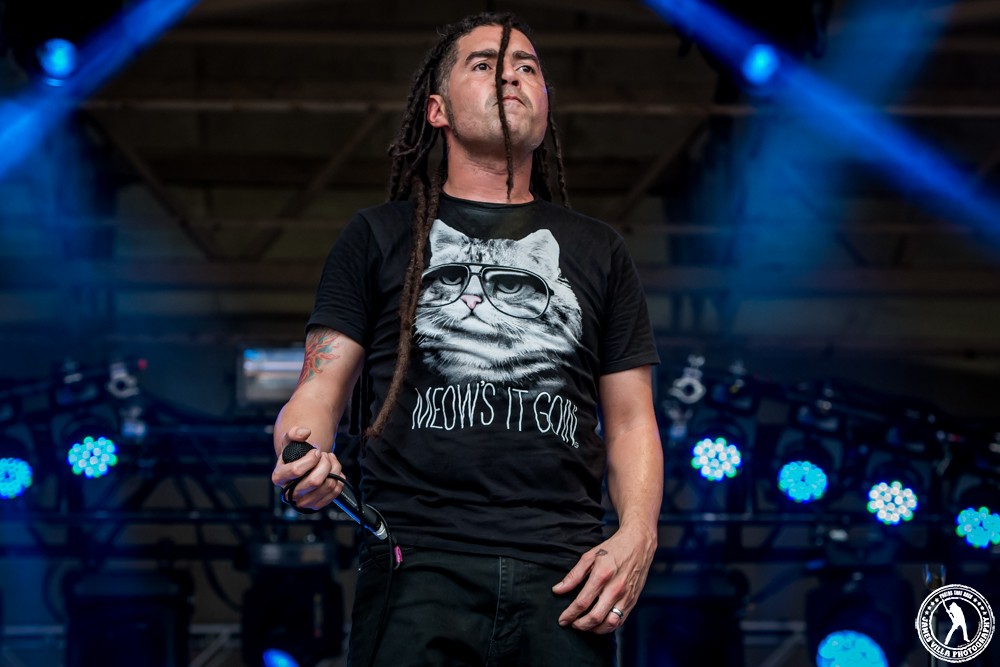 Just as things were getting good, Mother Nature intervened as the sirens and weather warnings began to be heard throughout the venue, asking concert goers to return to their vehicles and seek shelter. Many refused to leave and even more chose to take their frustrations out with the event organizers, voicing them by any and all means of social media at their disposal.  It’s hard to pick sides on something that can ultimately have either severe or even little or no effect on the overall safety of an event.  With that said, festival organizers were ultimately just trying to make sure everyone was safe.  Had this weather even escalated into a full blown tornado as expected, I may not be writing this.

The irony in this was that ultimately, only a small amount of bands actually didn’t play at all. Among those were Hollywood Undead, Scott Weiland and the Wildabouts, Fozzy, Upon A Burning Body, and Exodus. Overall, very minor lineup changes; and when all was said and done, the rock continued. 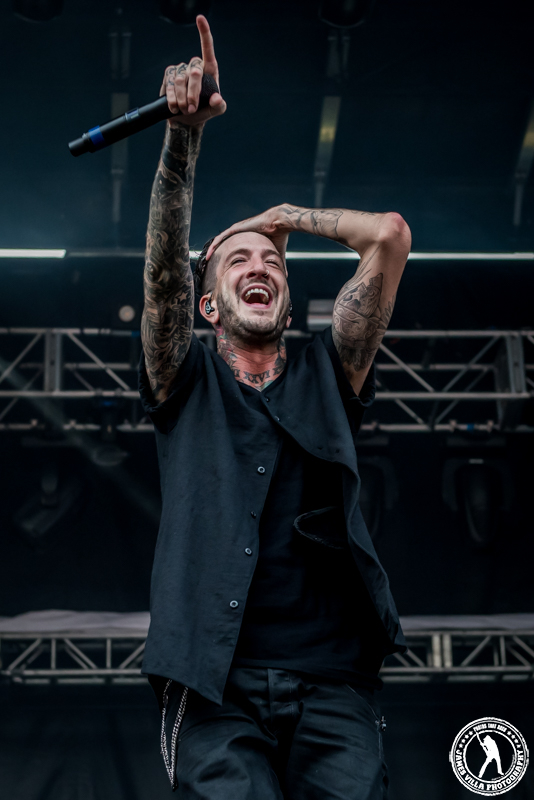 Of Mice & Men’s set featured the blistering energy and vocal dexterity of both Austin Carlisle and Aaron Pauley.  Riding high on the success of Restoring Force, the band ran through a fair share of tracks from both of the records releases, the crowd constantly showing their approval.

Shortly before the start of Halestorm’s set, the dreadful sound of sirens and warnings again reared their ugly heads and it was back for cover. Thankfully, this warning was much shorter, and minutes later we were back in action. 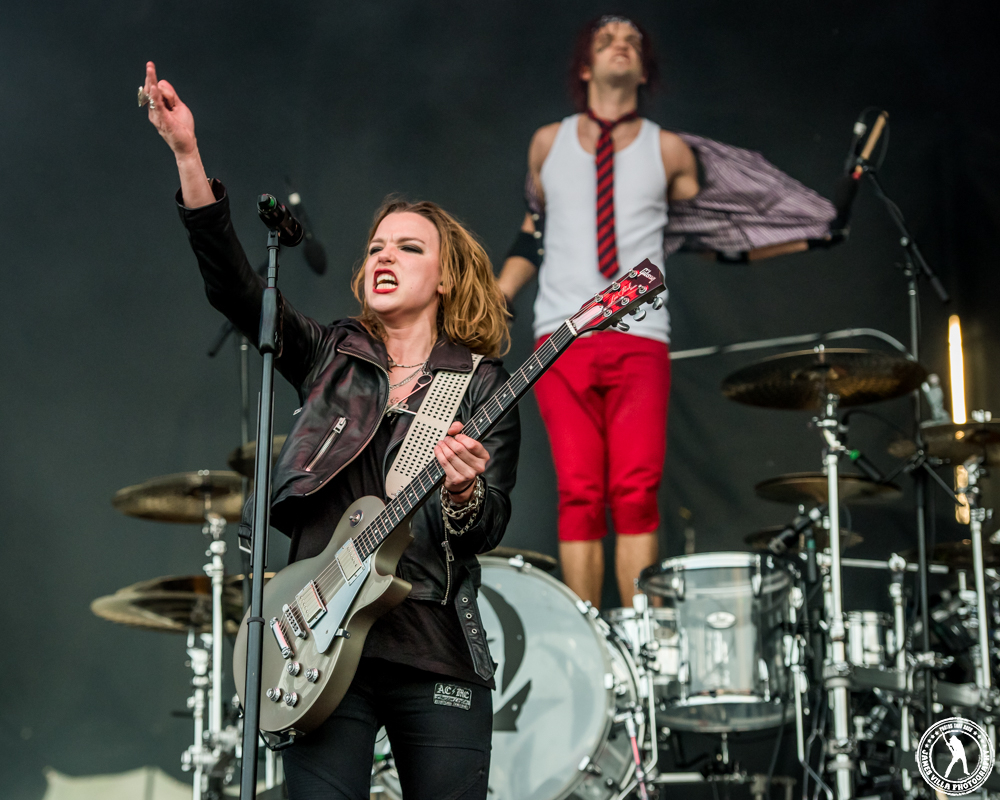 You could hear the chants for “Izzy” well before Izzy Hale made her way on stage. She wasted no time in coming back out as soon as the rain stopped and ripped through her set like a woman possessed. Crowd favorites included “Freaks Like Me”, “Love Bites (So Do I)”, “Apocalyptic” and “I Miss the Misery”.  Every Halestorm performance is always enhanced by her sibling Arejay’s outstanding and sometimes overpowering stage presence. Even though her set was kept short (about seven songs) it was hard to tell if anyone even noticed. Halestorm is definitely an act you need to catch if you haven’t already done so.

If rumors are correct, this will be Ministry’s last tour. Their performance on the Jack Daniels stage went off without a hitch. “Uncle” Al Jourgensen seemed a bit off but the majority of the crowd didn’t even seem to notice or care; and the fact that this stage included the highest concentration of mud made for an interesting pit.

I, for one, was a bit taken back that their set only included two classics, like “N.W.O.” and “Just One Fix”, and felt they could have been a bit more engaging. 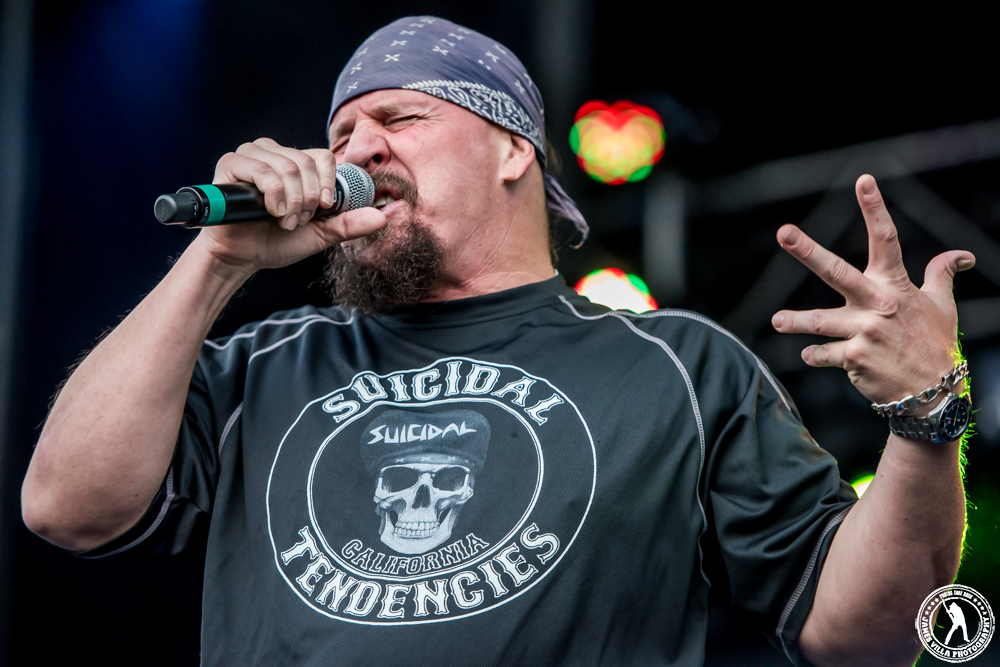 California punk rock kings Suicidal Tendencies were their usual ball of energy, with Mike Muir’s energy level rivals that of most twenty-year-olds. Even the normally relaxed Dean Pleasants was unusually active this afternoon. The guys killed the Reverbnation Stage; and the amount of fans—young and old—that ST always seems to gather at these large festivals never fails to impress me.

Last year marked the release of their 13th album, and as of today they show no signs of slowing down. 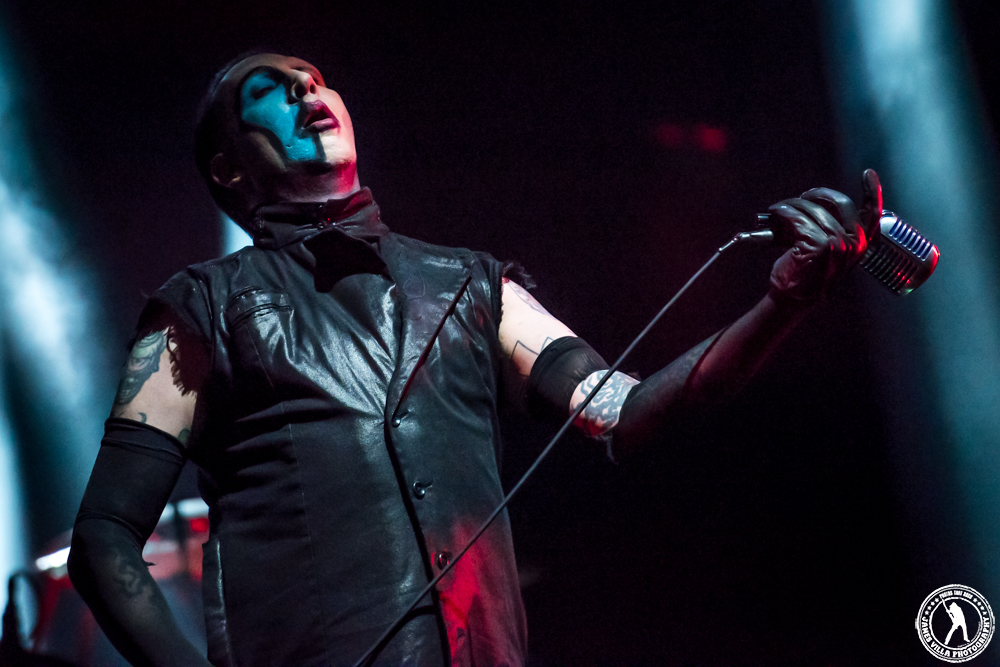 After that, I had a tough choice to make, as Slayer’s set was pushed back so far that it ended up conflicting with the start of Marilyn Manson’s scheduled start time. I chose the latter, given that Manson was the headliner of one of the stages, being one of two of music’s biggest names capping off this first day.

Manson is currently on tour supporting one of his biggest releases since 2000’s Holy Wood, The Pale Emperor. The Pale Emperor himself proved he has a lot more musical talent and songwriting ahead of him. His dark and ominous stage set highlighted the evening; while his forty plus minute set included a couple from his latest release, “Deep Six” (which led the show) and “Cupid Carries a Gun”.  Manson threw in a couple of covers, such as “ Sweet Dreams” and “Personal Jesus”, before ending with a song formally reserved as a show starter, “Irresponsible Hate Anthem”.  As the lights went off and Manson walked off the stage many expected an encore, but unfortunately, it just wouldn’t happen on this evening. 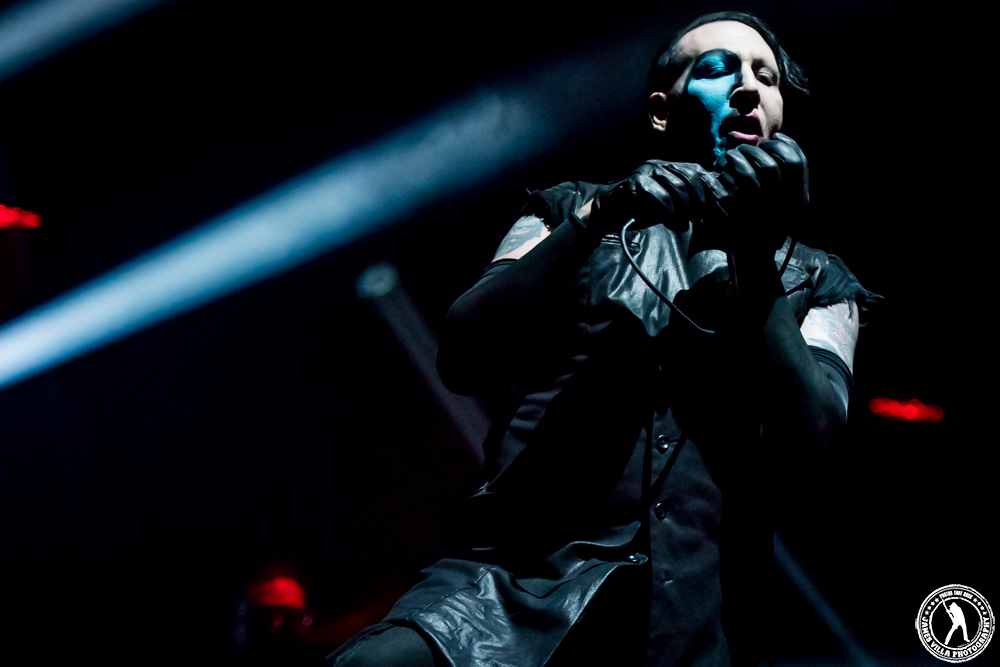 Making our way back to the Monster Stage for Korn proved to be no easy task, as it seemed that everyone was headed there as well.  The anticipation was clearly visible as the droves of fans flocked that way. 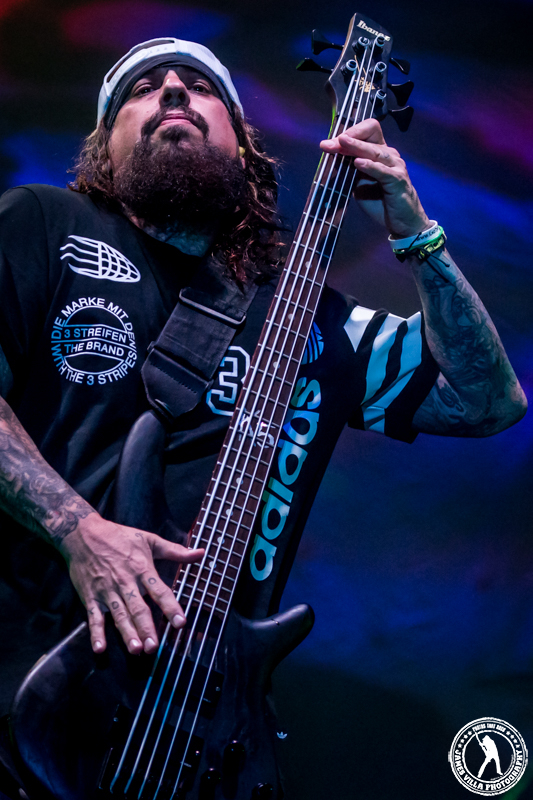 As promised, Korn’s performance was highlighted by the playback of the 20th anniversary of their self-titled release Korn in its entirety.  All 12 glorious tracks came to life on stage on this evening with every member of Korn wearing their classic drab and even playing on some of the original stage equipment used during their early career.  Ray Luzier played on a much smaller drum set than accustomed and even Jonathan Davis’s signature mic was nowhere to be found. As the final notes of “Daddy” were heard, the crowd erupted in cheer, begging for more. 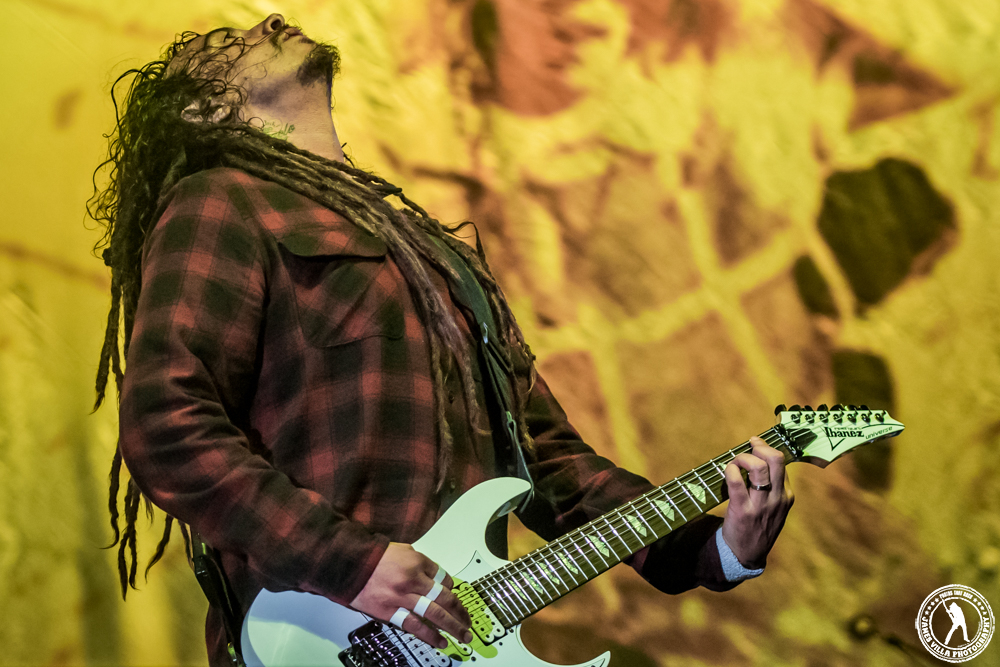 Davis and company soon returned with a blistering 3-song encore, which featured “Falling Away From Me”, “Here to Stay”, and “Freak on a Leash”.

For some, this would have seemed like the ending to a somewhat lackluster day tarnished by the elements, many would have to disagree.  Once again, Danny Wimmer and rest of the festival organizer put the safety of the fans first, and ultimately that was far more important than risking the safety of all involved.

Day two promised better weather and a surprise band.  Who could it be?