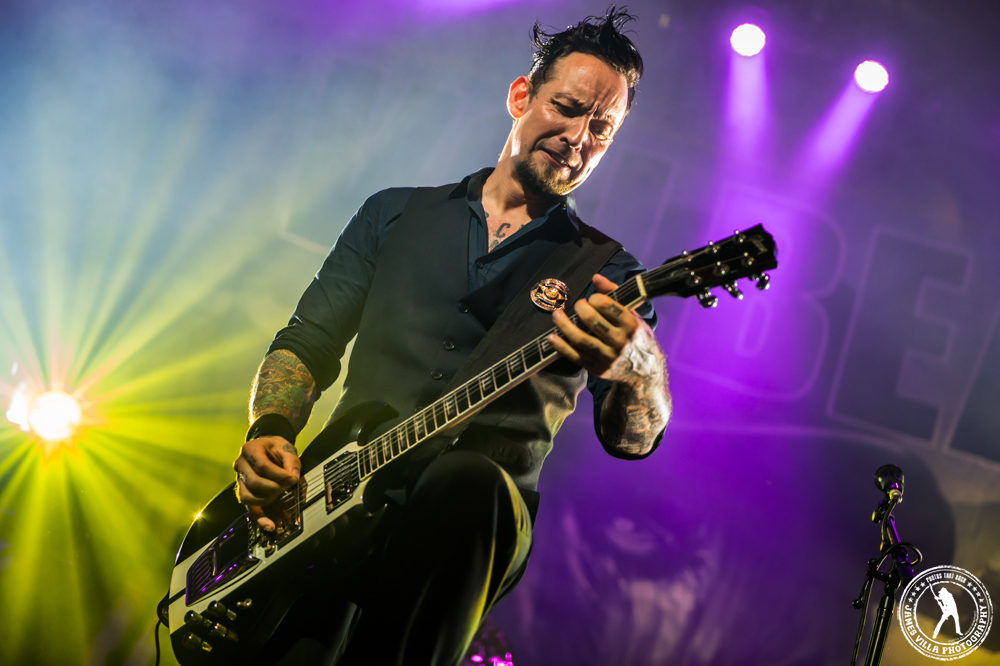 It’s always interesting to take a road trip to see a concert. I’ve found a new appreciation for the experience this year with all festivals and other shows I’ve been fortunate to have the opportunity to cover; and this Saturday, I was a bit excited to go up to Oklahoma City for the day.

This tour with Volbeat and Five Finger Death had been billed as a co-headliner one, and that proved to be no joke.

The Denmark-based band had the stage outfitted with some props, like a few headstones, along with a couple larger risers that sat on either side of the drum kit. It created an atmosphere that was really behooving of the band.

Jon Larsen was the first to take the stage, and he started going to town on his drum kit, as his band mates filed out. They all joined in on the instrumental intro, then suddenly stopped. “Cuckoo,” singer and rhythm guitarist Michael Poulsen said. Volbeat is serious about the rock, though they’ll get a little crazy when they can, and that gave the crowd a good laugh, as they resumed the song, knocking out “Hallelujah Goat”.

Poulsen was quite active this night, and right away started moving between all three microphones (stages left and right along with the center one), singing into each one for a bit, giving all of the fans a good look at him. The beefy 76-minute long set they had allowed them to do cuts off all five studio records; and they even had some fun early on, when Poulsen asked if everyone liked Johnny Cash. “…We’re gonna play a song by Mr. Cash,” he added. An acoustic guitar (fixed to a stand) had now been brought out to him, and he used it for their partial rendition of “Ring of Fire”, which had more bite to it than the original. They then transitioned to a track he said was inspired by Cash, and “perhaps even stolen” from the legend. “…It’s okay, he said, ‘Michael, you’re a good thief’.” He was setting up “Sad Man’s Tongue”, which saw him channeling a little of Cash as well as Elvis in his singing; while guitarist Rob Caggiano and bassist Anders Kjølholm ran about the stage, swapping sides from where they had been so far this night. 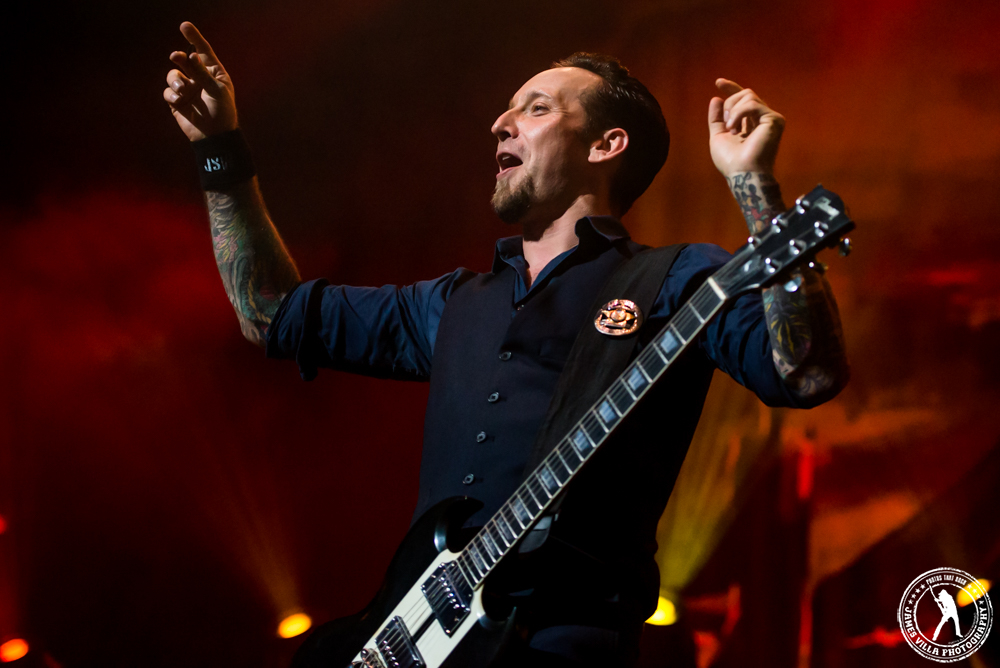 They really turned things up before “A Warrior’s Call”, when Poulsen asked to see everyone’s horns, as well as some crowd surfers during that one. Both requests were met; and then they dove right into the lightning quick “16 Dollars”. That latter came to a sudden end, as Poulsen proceeded to chat with the audience, eventually telling the guys to lift their ladies up on their shoulders. “There’s one! There’s two!” he said, as some ladies started being hoisted in the air, and once there were enough, they ripped back into the tune.

It was then he took a moment to truly express his gratitude for everyone, mentioning how hard it was to be away from wives, girlfriends, kids and all those important things. “…But this warms your heart,” he said sincerely, referring to all the dedicated fans who were out there, singing along and giving them 100% of their attention.

“This song’s about a shady lady called Lola,” Poulsen mentioned as they moved on, and the audience already seemed familiar with “Lola Montez”, which was one of their best songs of the night. That set them off on a series of tracks off Outlaw Gentlemen & Shady Ladies. During “Dead, but Rising”, there was an awesome moment when Caggiano — who had made his way onto some boxes that made a flank on either side of the stage — jumped backwards off it back onto the stage, spinning in the air as he did so. It was a real rock star move, and executed perfectly. 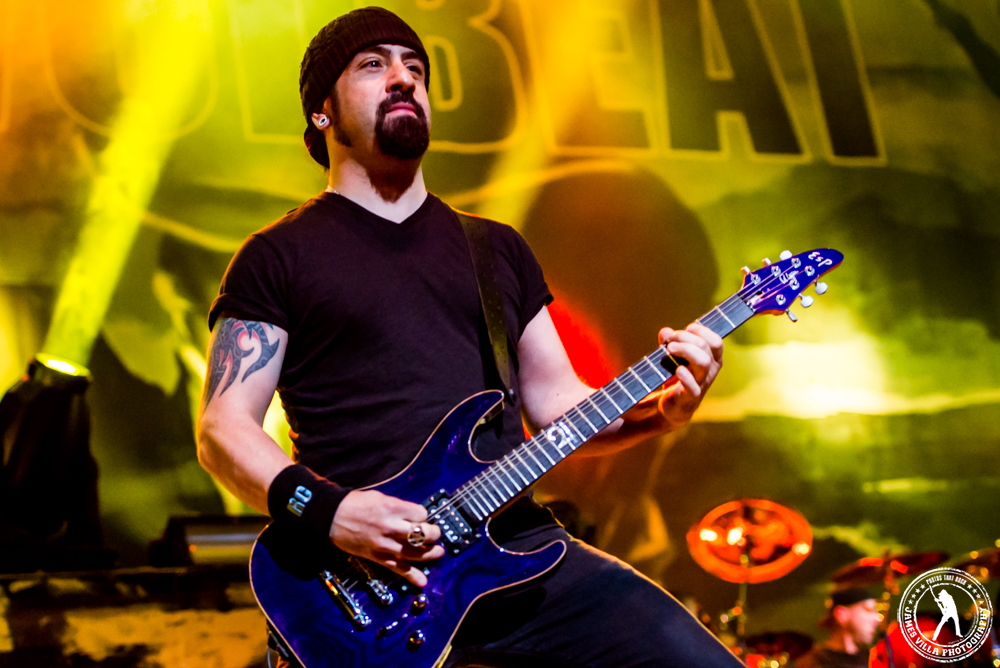 Before “The Lonesome Rider”, Poulsen even got in on the crowd surfing, letting the fans pass him around, and he was clearly loving it. A lone spotlight late shone on the vocalist, who started the opening chords for “The Hangman’s Body Count”, which had fans roaring; while “Cape of Our Hero” was another favorite of many this night.

The cooled moment of their set came during “Pool of Booze, Booze, Booza”, which beforehand, Poulsen invited all the young kids to come up there and “rock out with Volbeat”. Not many did at first, but eventually, the width of the stage was lined with kids, forcing Kjølholm up on one of those platforms beside the drums. The singer even had one kid poor a bottle of water over his [Poulsens’] head.

They made it out like that could be the end, and I think a lot of people assumed it was, though everyone was glad to hear “Still Counting” round out their performance. 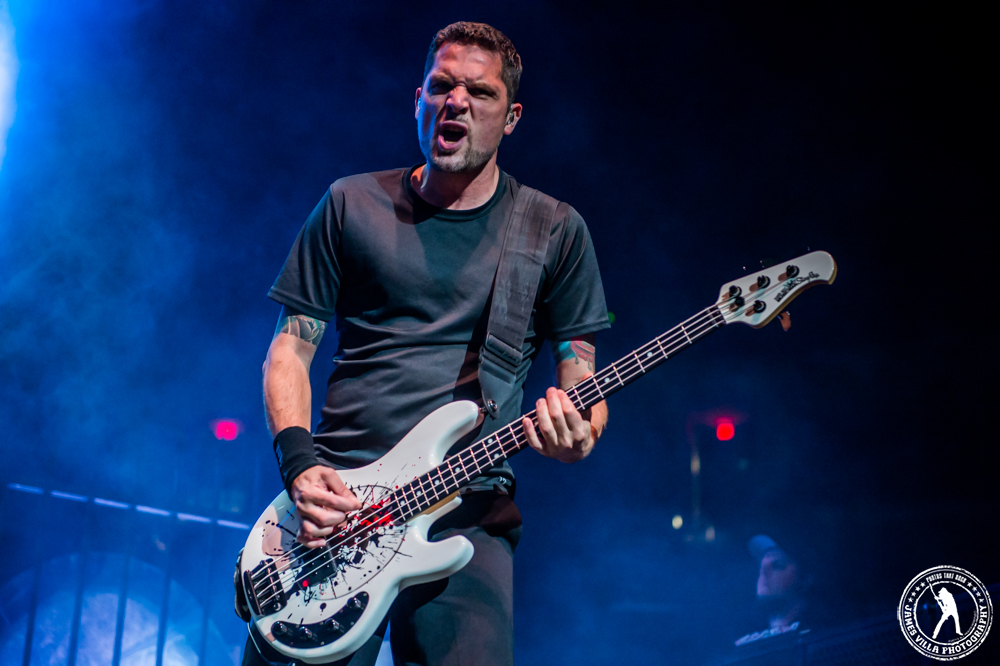 They were phenomenal this night, even giving Five Finger Death Punch a legitimate run for their money.

I was one who thought this was kind of an odd pairing, seeing that both Volbeat and FFDP play totally different styles of music, but in the end, it made for a great diversity. Everyone was very receptive to it, though. Not that that was a surprise, as Volbeat has certainly carved out their niche here in America.

Their mix of rock, country and even some rockabilly was engrossing this night, and they seemed to only know one speed: full throttle. The end result was a performance no one who was at Chesapeake Energy Arena that night will soon forgot.