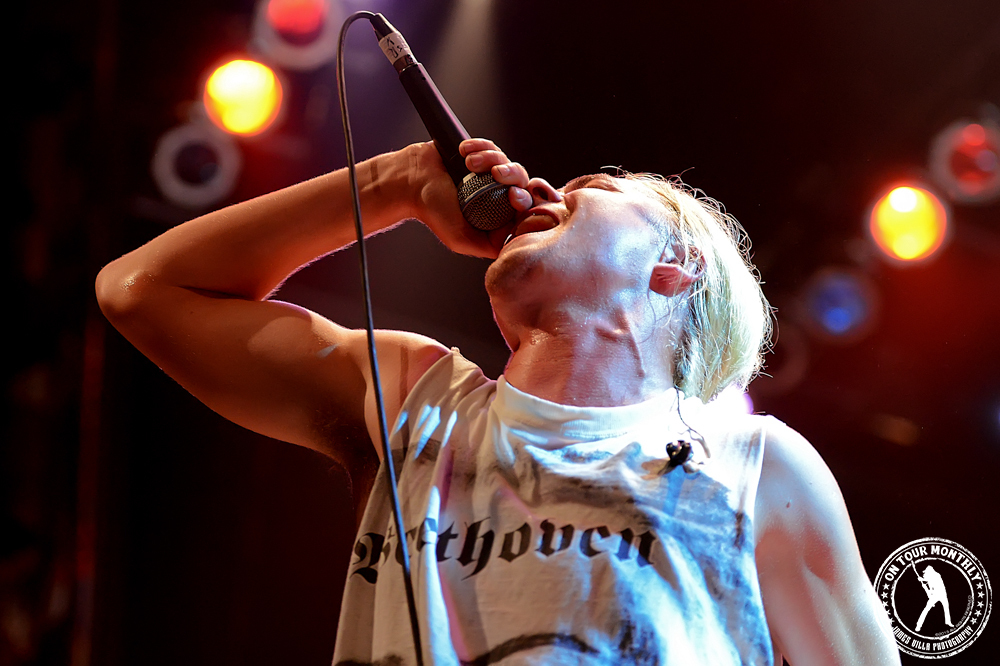 First on deck at the House of Blues this night was Charming Liars, a band who was a long way from home, which was something front man Charlie Cosser also pointed out once he and his band mates had taken the stage. “We are Charming Liars from London!…” he shouted, before asking the decent sized crowd to take five steps forward. “…Let’s get warm.” he said, referring to being able to feel one another’s body heat.

The rock commenced as they came barreling out of the gates with “Break Away”. The roaring rock number, which was complete with some blistering guitar notes and even some heartfelt lyrics (“…I’m taking back the wasted hours before I get too old…”), was instantly engrossing, capturing the interest of all the spectators as most of them began to be converted into fans.

“How the fuck are we doing tonight?!” Charlie asked the audience while taking off his jacket, and no sooner had the people yelled back with excitement, the band moved on to their next song, “I’m Losing You”. You could have gotten down and busted some moves to it if you had wanted to, having a slight dance vibe to it. It was a rock song first and foremost, though, a point guitarist Nick Krein unintentionally made by shredding so furiously he broke one of the strings on his ax. He didn’t even seem to acknowledge it, still slinging his guitar about while the string whipped around wildly in the air.

Charlie gave him some props once they were done for powering through and playing with a broken string, setting up their next song while Nick switched out guitars. “…This one’s called My Kind of Crazy.” he stated. It was one of their non-album tracks (at least for now), but was a very fun song, particularly for the audience as the band got some crowd participation by asking them to clap along to parts of it.

“How many of you are excited for Sick Puppies?!” asked Charlie, getting the crowd even more pumped up, before asking for some more up on the following number. “Now that we’ve warmed up are vocal chords, we need your help.” he said, saying a line from the coming songs chorus and asking everyone to sing it when they got to it. It was called “The Desperation”, and if anyone was still on the fence about Charming Liars, then it was surely the last nail in the coffin as far as winning them over. It was my personally favorite song of theirs this night, and my attention suddenly shifted to bassist Mike Kruger, who was demonstrating some pretty sweet moves as he conducted his movements in synch with the drums, only getting more exuberant the further they got into it.

At the tail end of the song, Charlie hopped of the stage and stood on the barrier that kept the crowd at bay, holding the microphone out to some different people, allowing them to sing the chorus they had been taught just minutes before. The unrelenting pace continued when he asked if anyone had an ex boyfriend or girlfriend “…That you just fucking hate…”, which garnered a large response of shouting and applause. “Well, that’s what this song’s about.” he finished as they tackled “Fingers Crossed”.

It didn’t seem like they had been up there for any time at all, yet already they Charlie announced they had one song left. It was the title and lead track from the EP they put out this year, “New Disorder”, and with that that quick, dynamic song, Charlie, Nick and fellow guitarist Karnig Manoukian, as well as Mike and the drummer made sure to let loose any energy they still had pent up.

The most remarkable part of all that was that all that rock was squeezed into a mere 26-minutes, and I’d be willing to bet they honed that precision while on the road as part of the Uproar Festival this summer.

I had absolutely no prior knowledge to Charming Liars before this, and like most of the people that saw them this night, I was hearing their music for the first time, and I was completely blown away and utterly amazed.

They owned it from the moment they set foot on the stage, delivering a solid, high-octane rock show, the likes of which you don’t see much of these days.

Each of the five members held their own on stage, Charlie running and bouncing all over the stage, acting like the idealistic front man, who has an undeniable voice to boot. Karnig and Nick’s guitars worked in excellent unison, being raw and ballsy, while also incorporating some slight pop flares at times, while Mike and the drummer fleshed things out with the very tight rhythm section.

In terms of energy, and I mean brash, untamed energy, Charming Liars set the bar this night, and it wasn’t touched. That’s one of the qualities I find most appealing when it comes to a bands live show, and that has a great deal to do with why I loved them so much. And for the record, I don’t mean that as a slight about the headliner, who was also quite energetic, but in a totally different way than Charming Liars.

With said live performance and how well crafted their songs were in both a musical and lyrically aspect, I really could see these guys headlining arenas and stadiums one day. The potential is more than there, all they need now is to be heard by a majority of the world.