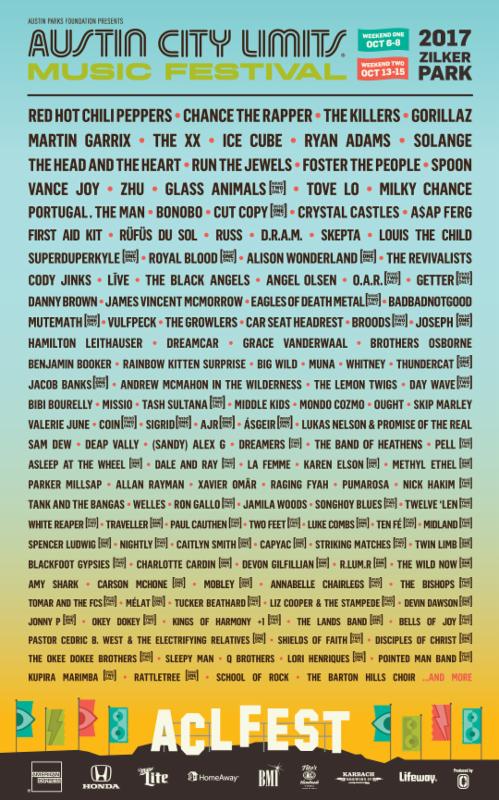 TICKETS ON SALE TODAY AT 10AM CT

3-Day General Admission Tickets for both weekends go on sale today at 10am CT at www.aclfestival.com. 3-Day VIP and Platinum Tickets and Hotel Packages will also be available starting at 10am CT. Music fans ages 10 and under will be admitted free of charge accompanied by a ticketed adult. 1-Day General Admission Tickets, 1-Day VIP Tickets and 1-Day Platinum Tickets will be available later in the year.

Austin City Limits Music Festival has called Zilker Park home for 16 years, and in 2017, the Austin Parks Foundation is celebrating Zilker 100, the centennial anniversary of this legendary green space. For more than a decade, proceeds from ACL Festival have gone directly towards improving Austin’s parks. Just this week, ACL Fest announced $6.3 million in funding to Austin Parks, making the total contribution to improvements to Zilker Park and parks across the city more than $26 million since 2006.

Fans worldwide who can’t make it to Zilker Park will be able to watch the Austin City Limits Music Festival Live Broadcast on Red Bull TV, which is distributed digitally for free on any connected device and accessible online at redbull.tv/aclfest. The Live Broadcast can also be viewed on www.aclfestival.com. Full broadcast schedule of performances will be announced in October.