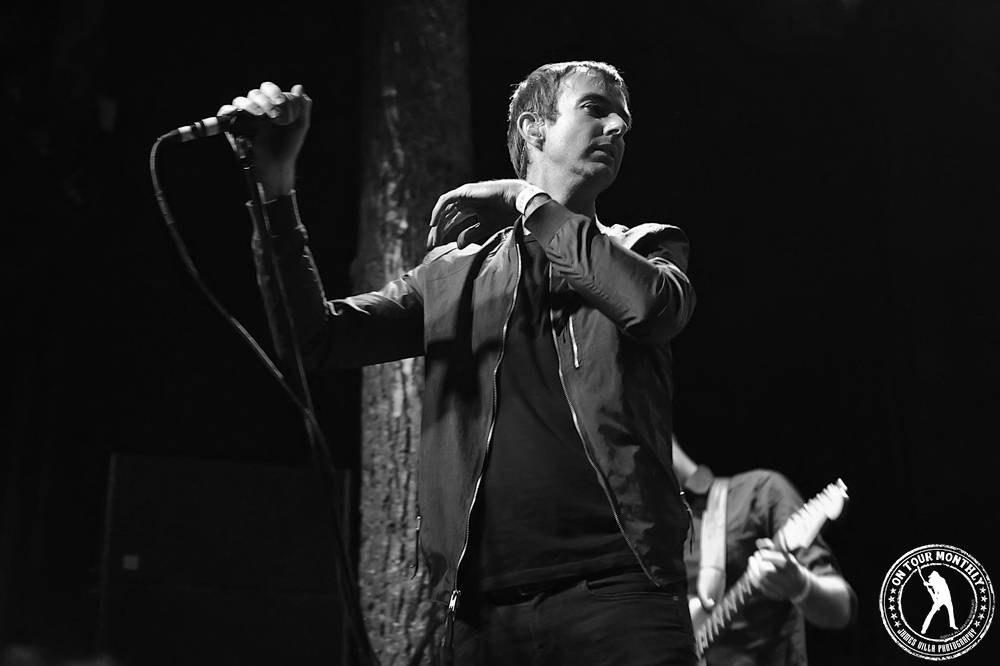 At only nine-o’clock Trees was already packed with a sold-out crowd who were on anxiously awaiting Crosses. They still had some time to wait, though, as Birds of Tokyo was serving as the main support band.

“Here in this moment, the silence is comforting…” crooned frontman Ian Kenny, shortly before Adam Weston aggressively beat down on his kit; the rest of the band following, breathing life into “Murmurs”. It was a great opener, with that fleeting moment at the start where Kenny got to show off his semi-falsetto tone, and turned into a nice rock number after that.

“A big thank you to Crosses for having us here…” he said, looking up at Chino Moreno, who was standing outside the entrance to the green room; watching them. They then turned the heat up a bit with the percussion driven “Wild Eyed Boy”, which also featured some sweet licks, and even a soaring solo from guitarist Adam Spark.

At this point, Kenny took a moment to clarify where they were from, which was Australia. “…Please, don’t mistake us for being British.” he joked, before stating their next song was called “The Gap”. I found it to be a highlight of their performance, partly because it was quite catchy, partly because Ian again pushed his vocal range, hitting a variety of notes throughout, and then you had the incredible four-part harmonies at the end. “…My greatest mistake was giving you up for nothing at all, for nothing at all.” sang bassist Ian Berney, keyboard player Glenn Sarangapany, along with Spark and Kenny.

“…Love’s a beautiful thing. All we need is love, as someone once said.” Kenny mentioned once that song concluded, flashing a bit of a grin as he said that last bit. They soon fired up “Silhouettic”, hitting their stride with that beast of a rock song.

“Your bum looks great.” Glenn joked with Kenny, and since his keyboard was setup directly behind him, he had a good view — rather he wanted it or not. They brought the mood back down a bit with “Circles”, which is a pretty relatable track; and then came “Wild at Heart”, which led them to their current single.

“This little diddy is a song called Lanterns…” Kenny told everyone, mentioning it had been getting some airplay here in the US. He then spoke about America for a minute, mentioning how multi-cultural it is and how much fun they had, had so far in the month or so they had been touring across the country. It was a bit of anthem of sorts, with a chorus that makes the song an easy sing along, while the words “On we march with a midnight song. We will light our way with our lanterns on…” can resonate with the listener. “…We are ready, we are young…” Kenny sang on the second verse, holding his middle finger up for a second on that line.

“Thank you, Dallas. It’s been fun!” he exclaimed, as they prepared to end their 36-minute long set with “This Fire”. A clap along was encouraged at the start, and much of the crowd joined in. The best (probably of their entire set) came during the final minute, when Glenn left his keyboard and picked up a couple of drum sticks, aiding Weston in banging about on his kit, while Berney used the headstock of his bass to smash one of the cymbals, all of which made for an epic end.

It was a dynamite show from a band whose style differed from that of the headliner, though they were a good fit. They’ve apparently earned a great deal of praise over in their home country, and I can say why. They have a very radio friendly sound, while managing to maintain their own individuality. The performance was very entertaining, too; and I enjoyed how they mixed some humor in there from time to time.

My guess is it’s only a matter of time before the American crowd really starts picking up on Birds of Tokyo: embracing them as the Australian fans have.