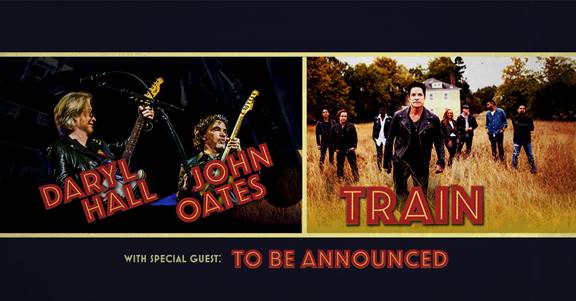 SUMMER 2018 Tour Will Make Over 35 Stops Across North America

Tickets On Sale to General Public Starting Monday January 29 at 10AM at Ticketmaster.com

Daryl Hall said of the summer outing, “This is going to be a tour filled with fun as well as great music. I love Train, and have a close relationship with Pat Monahan, going back to our ‘Live From Daryl’s House’ show together.”

“Looking forward to an amazing tour with our buddies from Train and seeing all our fans around the country in 2018,” added John Oates.

“I’ve known Daryl Hall and John Oates for a few years now and after being their fan my entire life, we now get to tour with them and spend time with legends in the world of music. This will be a career highlight for all of us in Train and a show that you won’t want to miss,” said Pat Monahan.