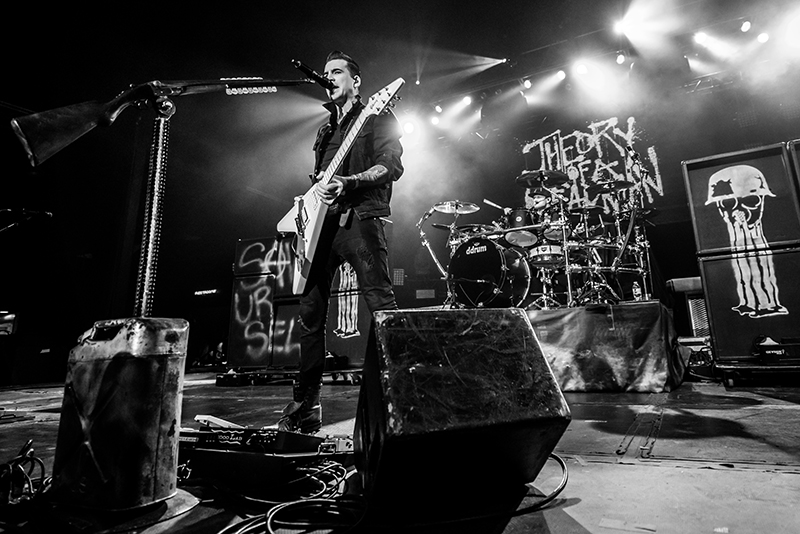 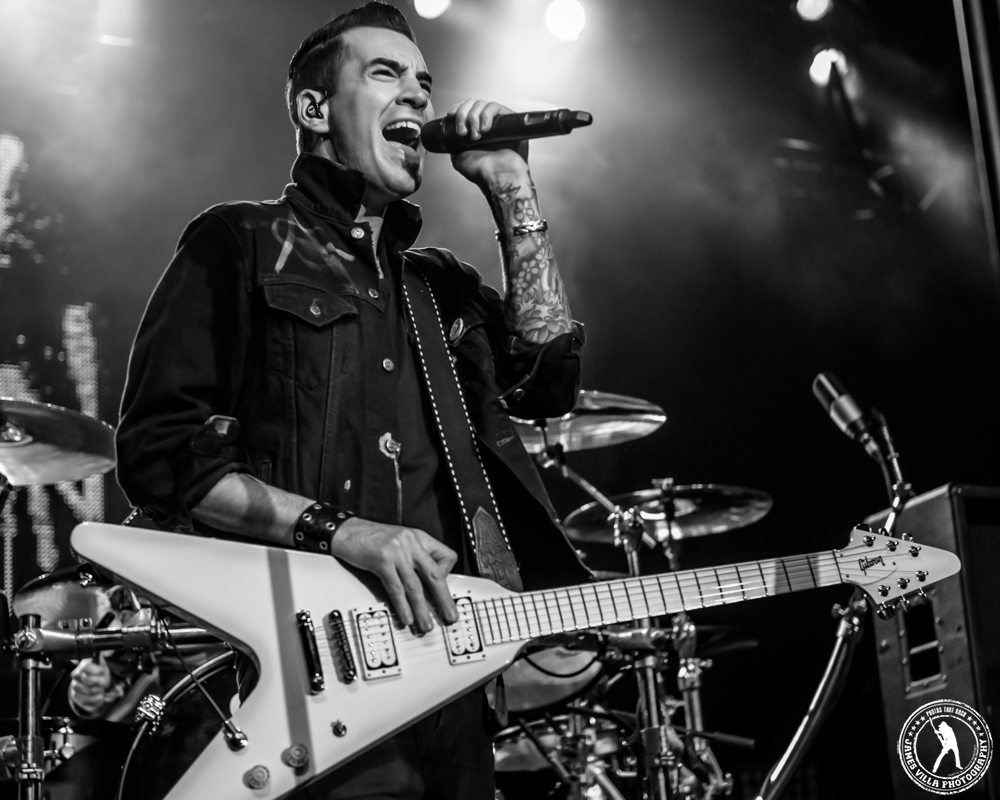 It felt a little strange seeing Theory of a Deadman at South Side Ballroom in Dallas night. Strange only because the only times I’ve seen the band have been at festivals (all of which happened within the last ten months), so seeing them indoors was something foreign to me. It was certainly nice, though. I mean, the fact that the climate could be controlled and we weren’t subjected to the grueling heat of the summer or the cold temps of a fall day in Kentucky. Yeah, that felt good.

An epic, operatic sounding intro piece played before the four guys began making their way on stage; and in good practice (for any band), they opened with something all of their fans would know, the lead track and single from 2008’s Scars & Souvenirs, “So Happy”. Singer and rhythm guitarist Tyler Connolly picked at his axe for the intro of the song, before tossing the pick into the air and out towards the audience when it came time to grab the microphone, as he walked around the stage some.

“I hope everyone is having a good time tonight!” he said afterwards, mentioning they would be playing “some rock ‘n’ roll songs” for everybody. He then got a clap along going in advance of “Lowlife”, before they eventually brought the adrenaline pumping pace down some with one of their heartfelt numbers, “Not Meant to Be”. 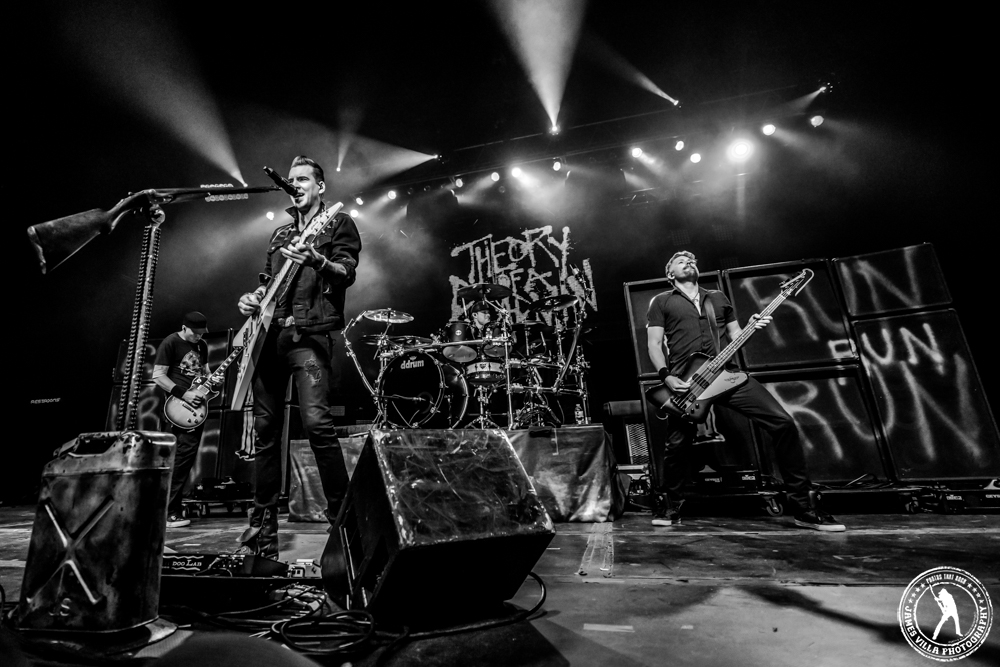 A track then segued them into the next song. It was comprised of various news clips, ending with the unmistakable voice of Kanye West, when he gave that interview claiming, “…Rappers are the new rock stars and I’m the biggest one of ‘em all!!” Appropriate, since “Blow” tackles the current state of the world, being obsessed with reality TV stars and things like that. Connolly laid his guitar down for it, fully embracing the frontman role he has the prowess for, as guitarist David Brenner, bassist Dean Back and drummer Joe Dandeneau ripped out the catchy song. Along those lines, I don’t believe that was one I had heard them do off Savages before, so it was nice getting a different song selection this night.

Connolly then gave a good speech about how when we’re young, we all have our favorite band, though by the time we get to a certain age, we usually find the style of music we’ll stick with for the rest of our lives. He confessed he used to listen to acts like Easy-E in his youth, before one day discovering his dad’s record collection, including Led Zeppelin. That favorite music conversation led to him saying the next song was one of their favorites to play, again showing off a more tender side with “Santa Monica”, a track that Dandeneau excelled at, crushing it behind the kit. 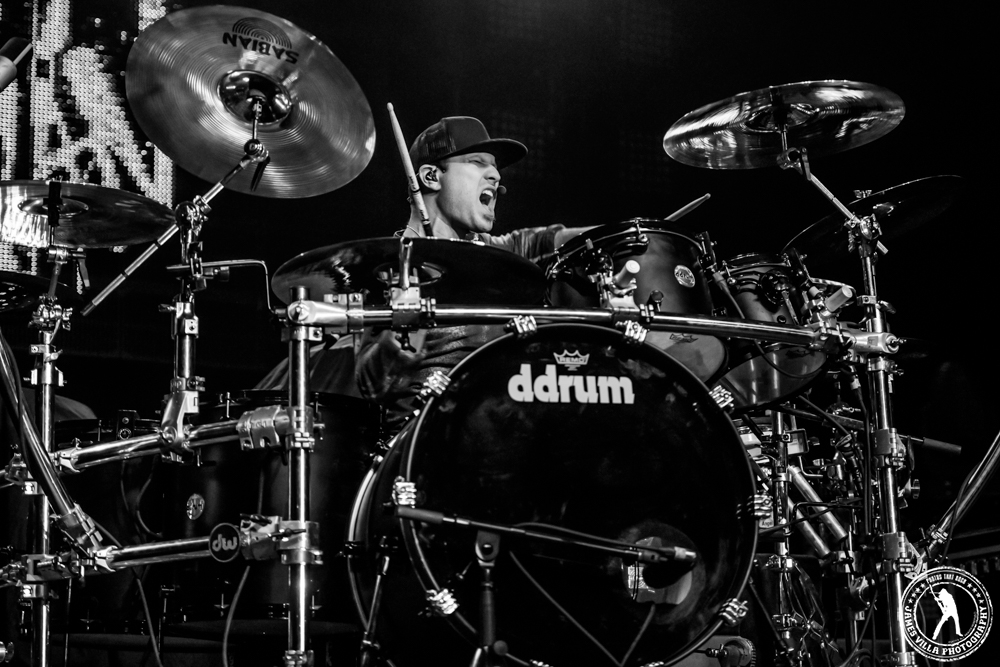 “Drown” and “Angel” were a couple more offerings from last year’s Savages, and upon finishing those, Connolly mentioned that while it may not have been the weekend, it sure felt like it to them, this night and any time they come here to Dallas. He stated that everyone has bad days, joking that the next day may be one of them, when some people wake up hung over and don’t really want to go to work. That brought them to “Hate My Life”, a song that Back was often seen mouthing along to the words, and even pumping his fist into the air in time with the beats at one point, all trying to further excite the crowd.

The job of closing their 43-minute long set then fell to “Bad Girlfriend”, which sent their fans over the edge, being just what they had been wanting to hear all night.

It was a really good show by Theory of a Deadman. Personally, I enjoyed getting a revamped set list from them and hearing a different ordering of the tracks. Their time on stage seemed to pass rather quickly, though they chocked it full of their modern day alt rock sounds, giving everyone the maximum amount of rock, with Connolly making the right of amount of conversation to form a rapport with everyone.