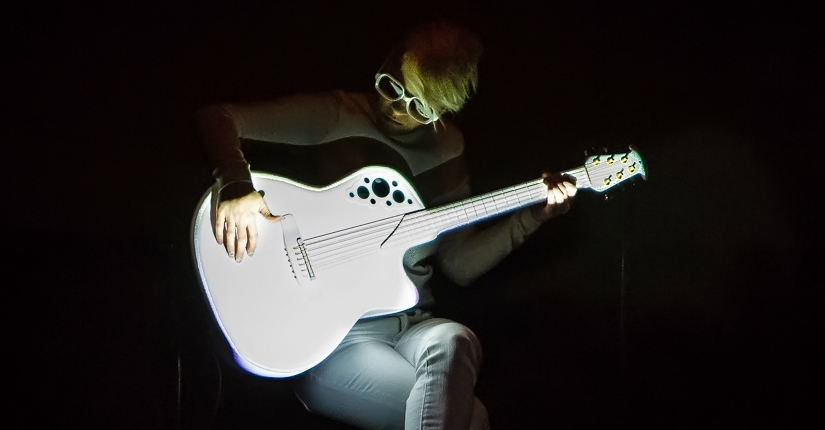 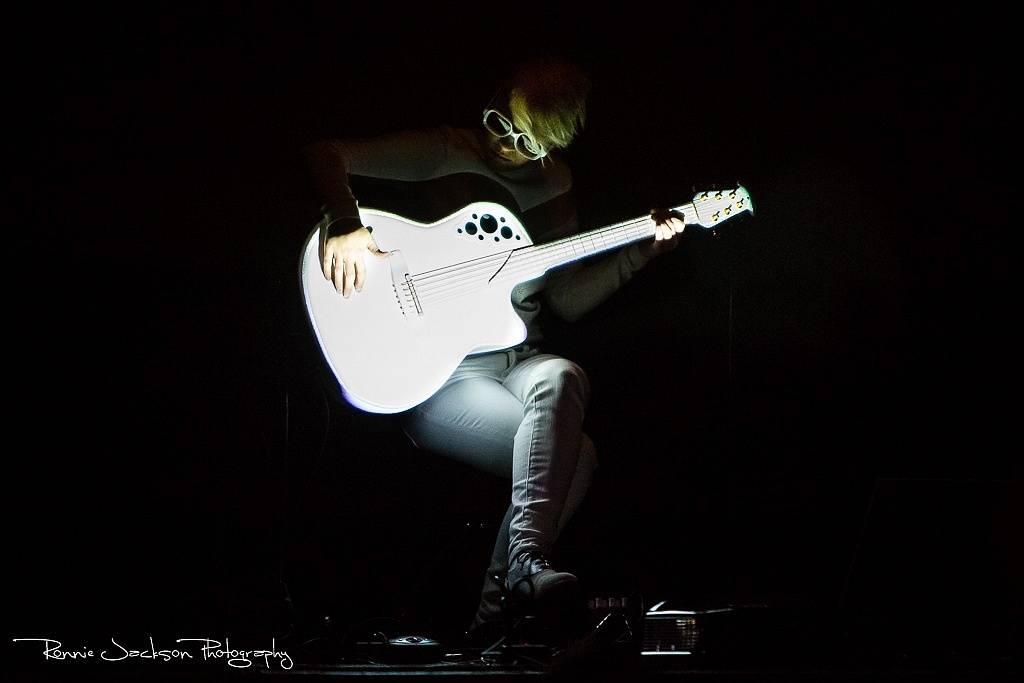 I was pretty surprised when I walked into the showroom of Granada Theater this night. I’ve seen shows there before where seats are arranged on the sides of each tier, though the center has always been open for people to stand. The venue has to be (and is) versatile for whatever it has coming though, though. Like on this night for Kaki King, when not only were a host of chairs and small tables set up along each side, but also every tier of the center, sans the back, which was saved for GA.

It was a totally different look from what I’ve seen here, but an appropriate one for a somewhat more low-key night.

The seats were slowly claimed by their owners for the night, filing in even after Denton-based Leoncarlo (who used to be a part of the acclaimed Seryn) began his set as the opening act. He was a violinist, adding a very cinematic quality to it as he relied heavily on recording and looping back some of what he was doing, allowing him to texturize his music and add a plethora of layers over it. At times, it was even difficult to distinguish what he was playing between everything else.

It did get a bit tedious for me at times. I should first acknowledge I’m not a fan of instrumental music in the least (I know, I was at the wrong show), but even then, his first piece lasted a little more than 30-minutes. On the other hand, the fact that he could play that long and keep up with everything speaks to his talent immensely; and his skill was something you had to admire. 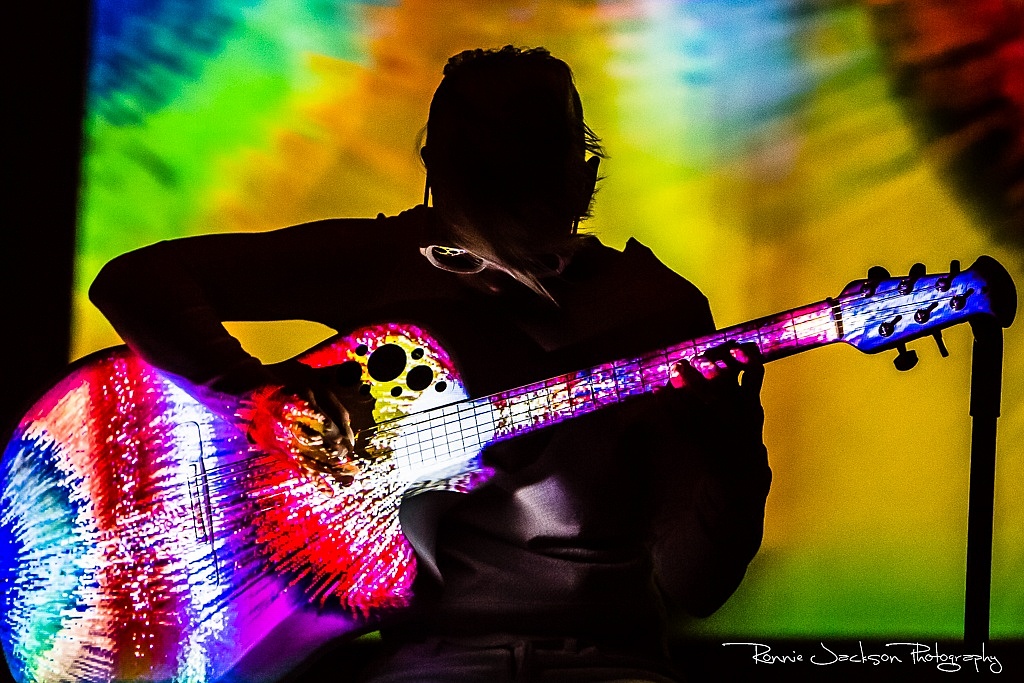 He earned himself a standing ovation from some; and it didn’t take long after he finished for the stage to get set for Kaki King.

It’s to be assumed that with King not fitting in my wheelhouse of typical musical interest, I knew little about her going into this show, a show that was in support of her forthcoming album, The Neck is a Bridge to the Body (due out March 3rd). A very clever play on words.

Her guitar was already on stage, mounted to a stand; and the audience was mostly silent for the couple of minutes before she came into sight, being mesmerized by the visual effects taking place on the screen at the back of the stage, while the guitar was lighting up, with it eventually being outlined in a neon color. This was clearly going to be a highly produced show, which piqued my interest.

She did a dozen or so songs in her 59-minute long set, tightly winding the first three into one another, leaving the captivated crowd to watch, awestruck. There was not a single light on the stage (with the exception of the projections on the screen and the guitar), making it pretty hard to make out anything more than King’s silhouette. That did add to the ambiance, though. I mention that because it was impossible to clearly what she was doing at the start of the second song, though it sounded as if she was running her nails across the strings down by the bridge. The result was a sort of scratching sound, similar to, say, scratching a record, yet there was a lot of depth to it. That soon escalated to her creating some percussion on the plastic bodied axe, tapping it, making for a sound that was reminiscent of a bongo drum.

Things fell silent after her third number, and the crowded room erupted into rave applause, letting her know just how much they were enjoying this so far. For the record, I was part of that. Just like everyone else, I had become completely engrossed by what she was doing.

A bit of a backing track was utilized on the next one, some hefty percussion bombarding the patrons eardrums as her fingers danced along the fretboard. Perhaps the coolest thing of all during that one was the stimuli going on, on the screen, where it looked like paint, at times small bits of it bouncing around due to some heavy rhythm sounds, to slowed down footage of paint dripping off of something. It was beautiful, just like the song. 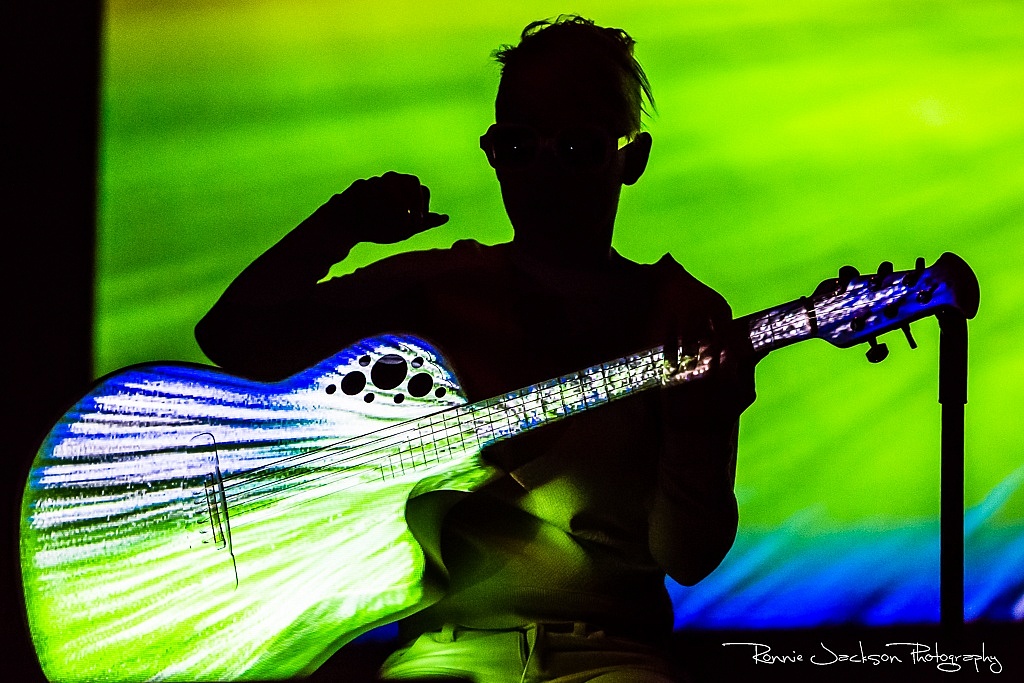 She breaked a little more for applause after that, though usually only allowed for a few seconds before moving on. One track really pumped up a fan, who screamed excitedly at the start, before quelling it so he didn’t disturb everyone. The “artwork” that was broadcasted on to her guitar during that one was some of my favorite of the night. It was simple squiggly lines, looking like a two-year-old learning how to draw was responsible for it at times, though it had a nice aesthetic to it. It was just cool.

The tricks continued as she began another song by steadily beating on the body of her guitar, a ripple effect being done in time to each strike of her hand, appearing as if the guitar was suddenly made out of some liquid.

Things took a very entertaining turn a bit later, when she plucked out some notes that originally sounded similar to the “Whaa whaa” sound the adults in the classic Peanuts cartoons with Charlie Brown and the rest would make. Fitting, since the guitar was now speaking to the audience, saying Kaki had told her it was okay if she chatted with everyone for a bit. That setup an hilarious video/story that was probably relatable for some people, too.

Remember how I said the guitar had a plastic body? Yeah, that was part of what the story centered around, as it talked about never fitting in, because it was different from the other guitars. A group of bully axes knocked a carton of eggs out of the guitars “hands”; and after a series of other adventures, which touched on just being yourself and being comfortable with that. The guitar then went home to her parents and grandmother, who not only criticized her for forgetting the eggs (calling her “albino” at one point), but said, “With a paint job like that, you’ll never find anyone to finger you”. I was cracking up for the few minutes that took, and I wasn’t the only one; and that story doubled as a nice musical piece as well.

She had just a few more left after that, starting to wind things down with a heavy, grunge-esque sounding cut that was highly electrifying, before tapering back off on her closing number. The duality between the two was gorgeous.

Most, if not all, of the spectators stood, singing her praises as she walked over to stage left and grabbed a microphone. The lights flooded the room for the first time all night, affording you a chance to actually see King, who was dressed in all white and had ditched the glasses she had worn during the performance. 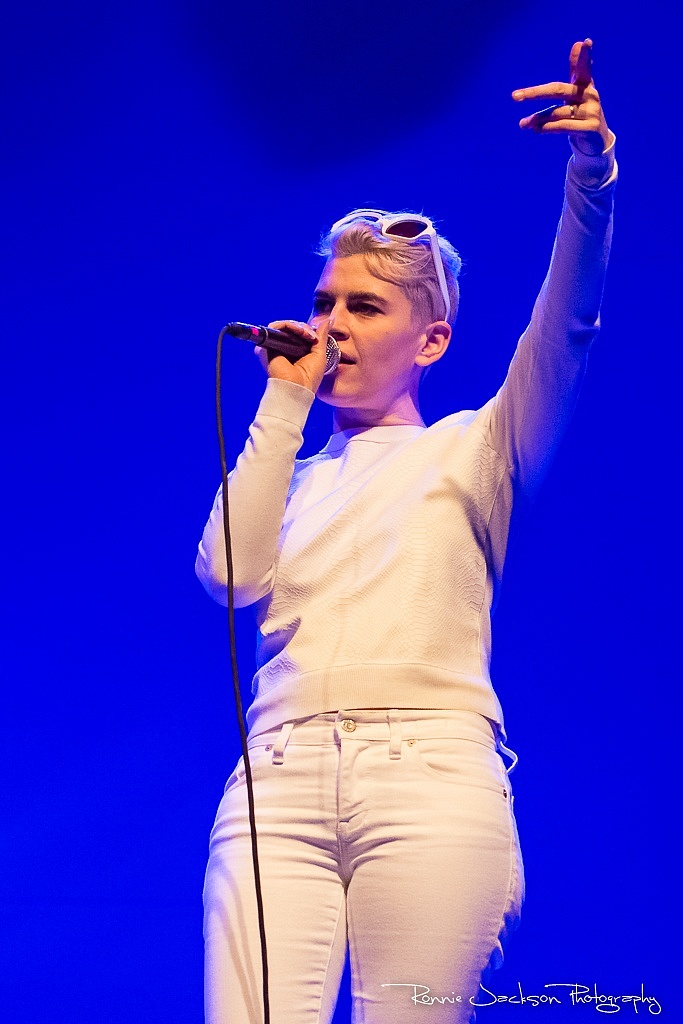 She was eager to finally address everyone with her words, mentioning her new album, saying it was a “story of the guitar by the guitar”. She also pointed out how much effort went into these shows, with a computer at times responding to what she was playing and creating visuals, while others it was done by someone who is part of her crew, responding to whatever King was doing at the time. I didn’t figure that was easy, though it was apparently even more difficult than I had assumed, and kudos to those who make that happen.

She addressed her solid white attire, saying anyone who did that was weird (admitting it was “totally” something she would do anyway), saying how dirty the shirt gets, even though she just changes into it before her shows and usually changes out of it shortly after finishing.

“Last year was a shitty year for news, just like the first part of this year…” she later remarked, saying awhile back she had been looking for some type of good news to glean from current events, and found the Rosetta space probe and its lander module companion. That led to a quick tangent about when she had her baby. “Well, I didn’t have it, my wife did,” she clarified, joking on how nice it was to use someone else’s uterus for things like that; and she compared the space probe and module to that, since the module left it (not unlike giving birth), never seeing it again. 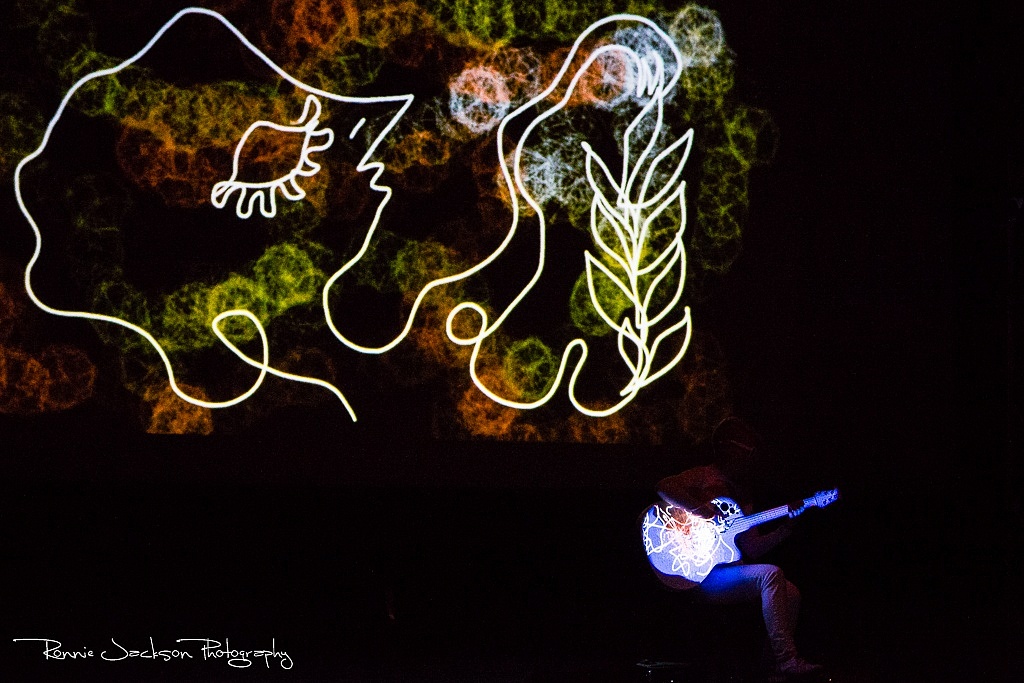 “It made me sad… but excited, ‘cause we could still do cool space shit,” she finished, setting up the song that those events had spurred. That was the lone encore, and that was sufficient for everyone.

This honestly didn’t feel like an hour long show. It passed that quickly, leaving you a bit sad that the night had already concluded.

You may not have been able to see King much this night, though you could clearly see what was most important. You could see her hands as she plucked, picked and tapped the strings of the guitar; and she somewhat came into view at times as she hunched of the instrument.

Her mastery over the guitar is impeccable, tossing all sorts of slick moves into her playing. Watching King play is purely mesmerizing. The sounds she creates speak to you. She’s in a league not many guitarists are in; and the production that accompanies her show makes it standout all the more. In that regard, I had never seen anything like this before. It was so different in general, and I loved every second of it.