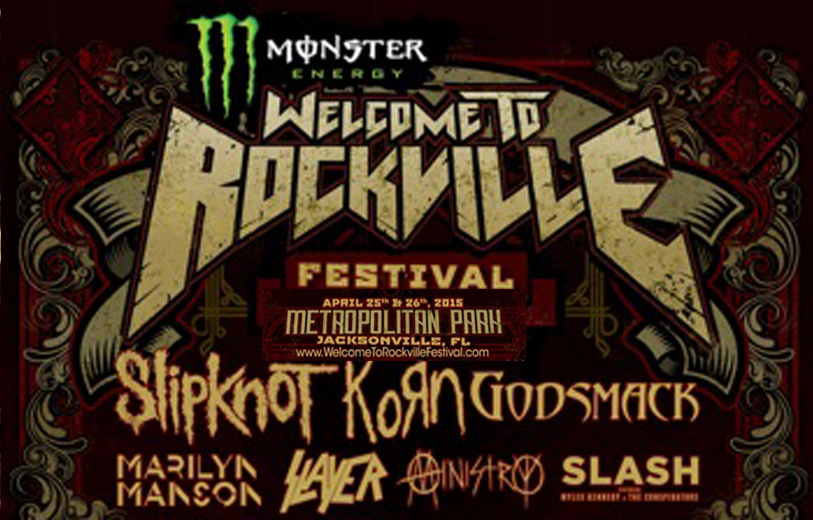 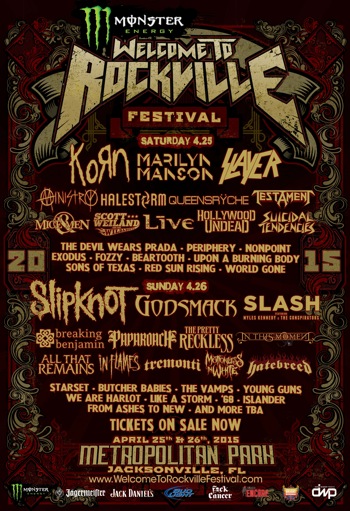 Monster Energy Welcome To Rockville will celebrate its fifth anniversary at Jacksonville, Florida’s scenic Metropolitan Park along the St. Johns River April 25 & 26 with a powerful rock lineup including Slipknot, Korn and Godsmack, along with Marilyn Manson, Slayer, Ministry, Slash featuring Myles Kennedy and The Conspirators, the triumphant return of Breaking Benjamin, Papa Roach, Halestorm, The Pretty Reckless, Of Mice & Men and many more (see below for full current band listing).

Slipknot is touring in support of their #1 album .5: The Gray Chapter–the fifth studio album from the GRAMMY®-winning group–with a live performance that will include their unique stage set and experience.

Korn will celebrate the 20th anniversary of their iconic self-titled album–featuring their breakthrough hits “Blind” and “Shoots and Ladders”–at Monster Energy Welcome To Rockville by playing the album in its entirety. Festival creator and producer Danny Wimmer says, “Korn is one of the most important bands of the last 20 years. They almost single-handedly created a genre of music. When they offered to perform this seminal album front to back, I had to have this special moment for my home town.”

21st century hard rock titans Godsmack have sold over 20 million records worldwide and are on the road in support of their sixth full length album 1000hp.

The current band lineup for Monster Energy Welcome To Rockville is as follows: Slipknot, Korn and Godsmack, along with Marilyn Manson, Slayer, Ministry, Slash featuring Myles Kennedy and The Conspirators, Breaking Benjamin, Papa Roach, Halestorm, The Pretty Reckless, Of Mice & Men, In This Moment, Scott Weiland and the Wildabouts, Queensrÿche, Live, Hollywood Undead, In Flames, Motionless In White, Tremonti, Suicidal Tendencies, Testament, All That Remains, The Devil Wears Prada, Hatebreed, Periphery, Fozzy, Nonpoint, Exodus, Young Guns, Butcher Babies, Starset, We Are Harlot, Like A Storm, Upon A Burning Body, Beartooth, Islander, ’68, Stars In Stereo, Red Sun Rising, From Ashes To New, Sons Of Texas, World Gone, with more to be announced.

“It’s gonna be awesome bringing one of the world’s loudest bands to Rockville for the World’s Loudest Month,” says Corey Taylor of Slipknot. “I hope the fans are ready because we’re coming for EVERYONE.”

Of Mice & Men’s Austin Carlile says, “We’re incredibly excited to be a part of Welcome To Rockville 2015 in Jacksonville. It’s our first time playing the festival and it’s an honor to be a part of one that has such a great history of bands. See you soon, Florida!”

New for 2015 is the Monster Energy Welcome To Rockville Tequila World, with a Mexican fiesta theme, featuring a wide range of tequilas, margaritas, tacos and more. Metalachi–the world’s first and only heavy metal mariachi band (www.metalachi.com)–will keep the party rolling with three performances on the Tequila World stage each day. Admission to this area is free and open to those 21 and up. 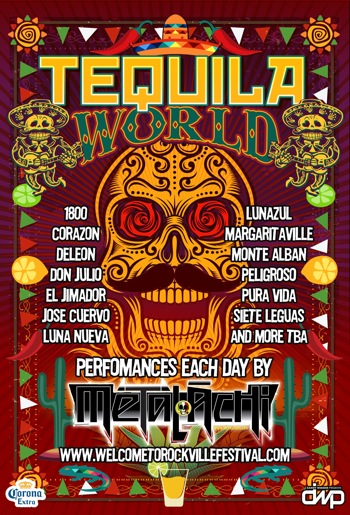 Festival creator Danny Wimmer explains, “Unique food and alcohol experiences have become an integral part of music festivals. I can’t think of a better pairing for Rockville than tequila, tacos, music and sunshine.”

A discounted ticket pre-sale for Monster Energy Welcome To Rockville is available from Tuesday, December 9 at 10:00 AM ET through Friday, December 12 at 9:59 AM ET. A password for access to the ticket pre-sale can be obtained via www.WelcomeToRockvilleFestival.com, local Florida, Georgia and Alabama rock radio stations, and select rock media outlets.

The Monster Energy Welcome To Rockville ticket pre-sale offers a limited number of discounted Weekend General Admission and VIP tickets. Ticket prices will increase on day 2 and 3 of the pre-sale. Prices are as follows (plus fees):

Weekend VIP tickets are $224.50 throughout the pre-sale. Hotel packages will also be available for purchase during the Monster Energy Welcome To Rockville pre-sale.

A limited number of tickets will also be available at select Metro PCS locations with no service fees during the pre-sale and general on-sale.

Regularly priced tickets go on sale Friday, December 12 at 10:00 AM ET for the following prices (plus fees):

Ticket prices will increase in the coming weeks, so fans are encouraged to buy now and save.

As in the past, General Admission ticket discounts will also be available for active military through Monster Energy Welcome To Rockville partner GovX (www.govx.com).