With the shocking death of guitarist Jeff Hanneman just six months removed, I really wondered whether Slayer could actually continue as a band. The symbiotic relationship the fallen guitarist had shared with Kerry King had bonded these musicians on a level rarely seen in this industry. The dynamic duo, acting as one, had literally created the death metal genre with their relentless sonic assaults on the senses, coupled with the graphic violence often depicted in the lyrics the late musician had a big hand in writing. With his unfortunate passing, this legendary band now faced the uncomfortable position of being relegated to footnotes in history. The moment of reckoning was upon them? 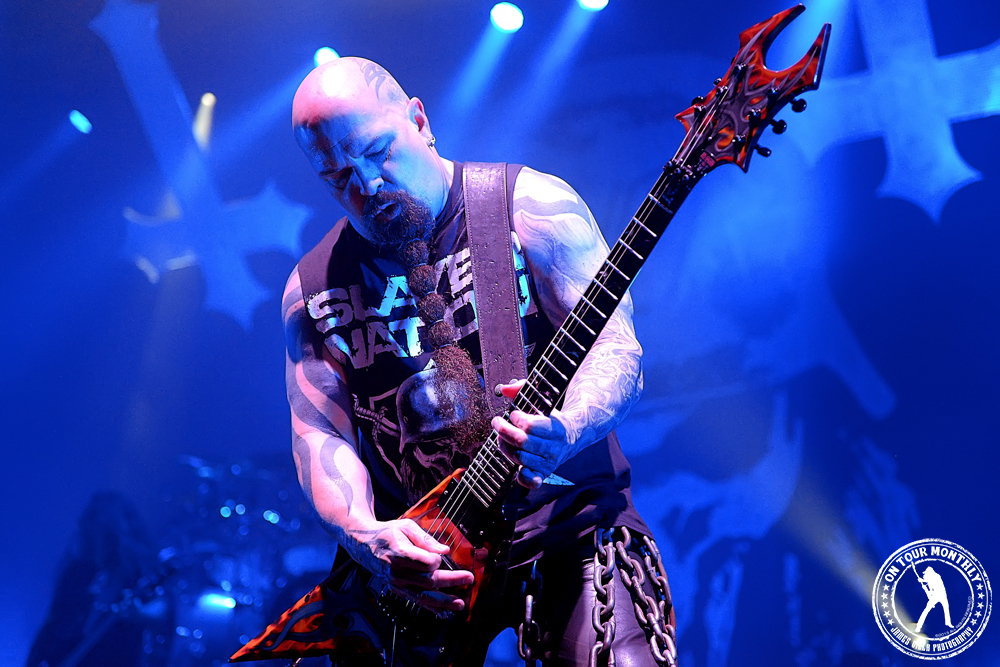 Like the seasoned pros they are, King, Tom Araya and Paul Bostaph knew exactly what to do with the hand fate had dealt them – go on tour. There would be no prolonged ‘moment of silence’ with Slayer. There was not going to be any questions of break-up swirling over their heads. If anything, this band needed to go on the road not only to pay respect to their fallen comrade-in-arms, but find an inner peace as well. They had toured once before while their guitarist was recovering from an injury in 2011. This time, however, it was different. The band was saying goodbye.

Tonight’s show started out with some ‘Thunder from Down Under’ from the group 4Arm. This fearsome Melbourne, Australia band wasted little time with introductions as they immediately bashed those gathered over the head with some heavy hitting music. The highlight was the title track, “Submission to Liberty” from their 2012 release. Vocalist Danny Tomb and fellow guitarist James Munro led the band’s blistering frontal assault while the rhythm section of Michael Vafiotis and bassist Andy Hinterriter anchored the rest of the sonic attack. Let’s just say that after this quartet walked off the stage after a raucous thirty-minute set, this crowd was more than warmed up for what was to come.

Next up was the French heavy metal-weights Gojira. Taking their name from the original Japanese pronunciation of Godzilla, the band is fronted by Joe Duplantier and includes his brother Mario on drums with guitarist Christian Andreu and Michel Labadie playing bass. Though better known throughout Europe for their unique blend of death, thrash and progressive metal honed over ten years of playing together, today the band is making a concerted effort to make a name for itself in the U.S.

They kicked off their Dallas appearance with two songs, “Explosia” and “The Axe” from their 2012 Roadrunner Records debut, L’Enfant Sauvage. The quartet then performed three consecutive tunes from the record that first got them noticed in the metal world, 2005’s From Mars to Sirius. The group closed their 45-minute set by ripping off two heavy tunes from their 2008 release The Way of All Flesh. I doubt there was a dry piece of clothing in the venue when the final notes of “Vacuity” drifted the sound system.

And then came the moment everyone had been waiting for. 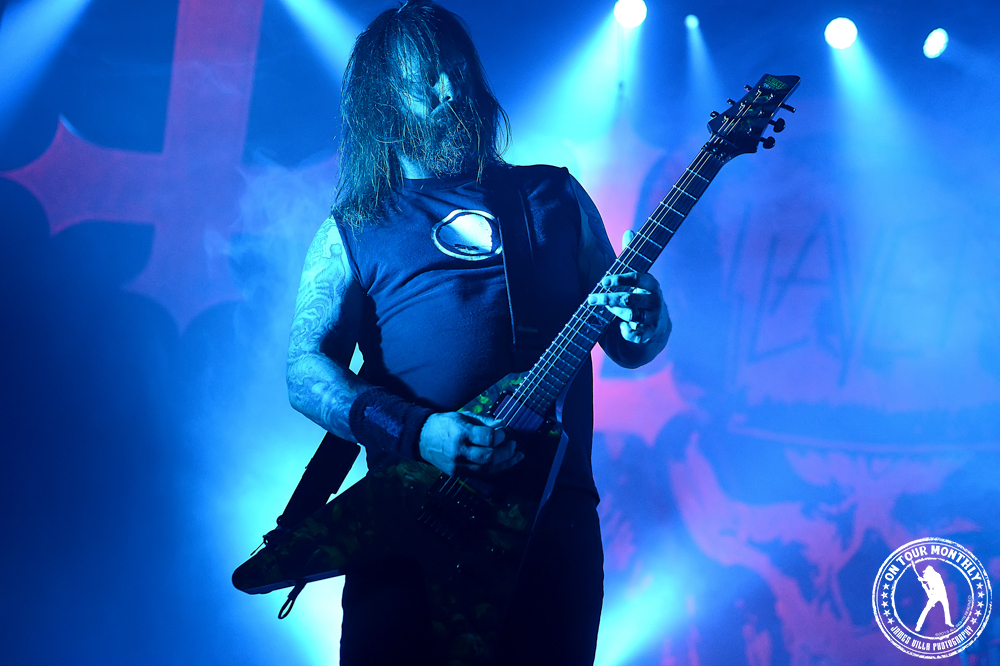 Exodus guitarist Gary Holt had first been tapped to step into Jeff Hanneman’s shoes in 2011 when the Slayer axe man was unable to tour after contracting necrotizing fasciitis from a spider bite. The near fatal battle to overcome bacterial disease had not only eaten away the skin tissue on the musician’s arm, it ultimately whittled away at his confidence as well. Unable to play the guitar like he once did, the humbling effects of this flesh-eating disease had sent the guitarist into a state of depression. That he died of cirrhosis of the liver two years after the fact made his death even more troubling. Tonight, none of that mattered.

On this particular fall evening, Slayer was going to perform a set list that concentrated solely on the Holy Grail of hits that covered Slayer’s entire 1980’s album catalog including the speed metal classics Reign in Blood, South of Heaven and Seasons in the Abyss. No other songs from the band’s next twenty years of non-stop thrashing would be performed.

The first five tracks Slayer chose to perform represented early classics by the band that laid the foundation for the legendary trio albums recorded from 1986 through 1990 that would cement the legacy of this iconic band. They started the evening’s proceedings performing the title track off the record that started the band’s undisputed march to greatness, “Hell Awaits.” It was followed by “The Antichrist” from ‘83’s Show No Mercy before the band smacked this delighted mob of Slayer devotees with “Necrophiliac” and “Captor of Sin” with “Mandatory Suicide” thrown in as a teaser. 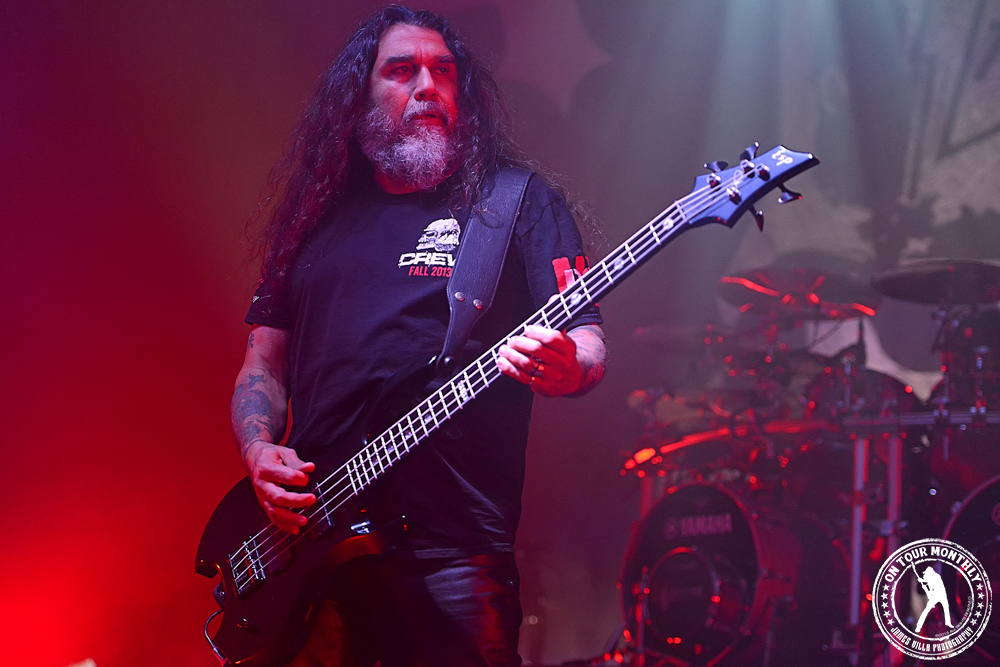 And hell then broke loose starting with the brutal thrash metal cut “War Ensemble”. The following three songs from Slayer’s undisputed 1986 masterpiece, Reign in Blood, “Postmartem”, “Altar of Sacrifice” and “Jesus Saves” sent those assembled into a delirious frenzy. The band offered a brief reprieve – if you want to call it that – by going back to their first two albums to play a couple of more tracks. The band then picked up the pace once again by bludgeoning this crowd over the head with another triple play of tunes from their 1990 landmark Seasons of the Abyss, by playing “Hallowed Point”, “Spirit in Black” and the title track.

This crowd was spent after an hour of non-stop head banging. In a nod to Gary Holt’s extensive work with Exodus, the band performed his group’s groundbreaking thrash classic, “Strike of the Beast”. After this bit of a reprieve, if you could call it that, King, Araya and Bostaphy ended this night of metal madness in typical Slayer fashion. The band sent the crowd into another uncontrollable state of chaos by playing their undisputed masterworks, “Raining in Blood”, “South of Heaven” and “Angel of Death.” With Jeff Hanneman’s name spelled out on the backdrop, the band walked off the stage. Nothing else needed to be said. Slayer had played all its cards.