James Villa
1 min read
– By Michal Elizabeth Smith –
“PUSH PLAY”
Lorde’s debut album “Pure Heroine” is addictive and the only anecdote is to keep listening. The 16 year-old singer-songwriter (Ella Yelich-O’Connor) from New Zealand is the youngest artist to top Billboard charts in 26 years and the first female in 17 years to top alternative charts.

Unapologetic of her opinion, Lorde openly criticizes mainstream female artists for being poor role models. For someone so young, Lorde seems an old soul who is wise beyond her years, steering clear of the paths of the pop princesses and carving one out that is all her own. While many artists similar to her age sing about luxuries, drugs, alcohol and the like, Lorde mocks generic, cookie-cutter pop songs, saying she is “kind of over getting  told to throw my hands up in the air” on the album’s lead single,“Team”. Her raw talent is conveyed through sleek, sultry songs such as “Still Sane” and “A World Alone”. Her hip-hop beats intertwined with a dark alternative sound make for the best unconventional pop album in years to date. 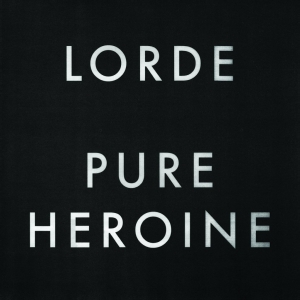