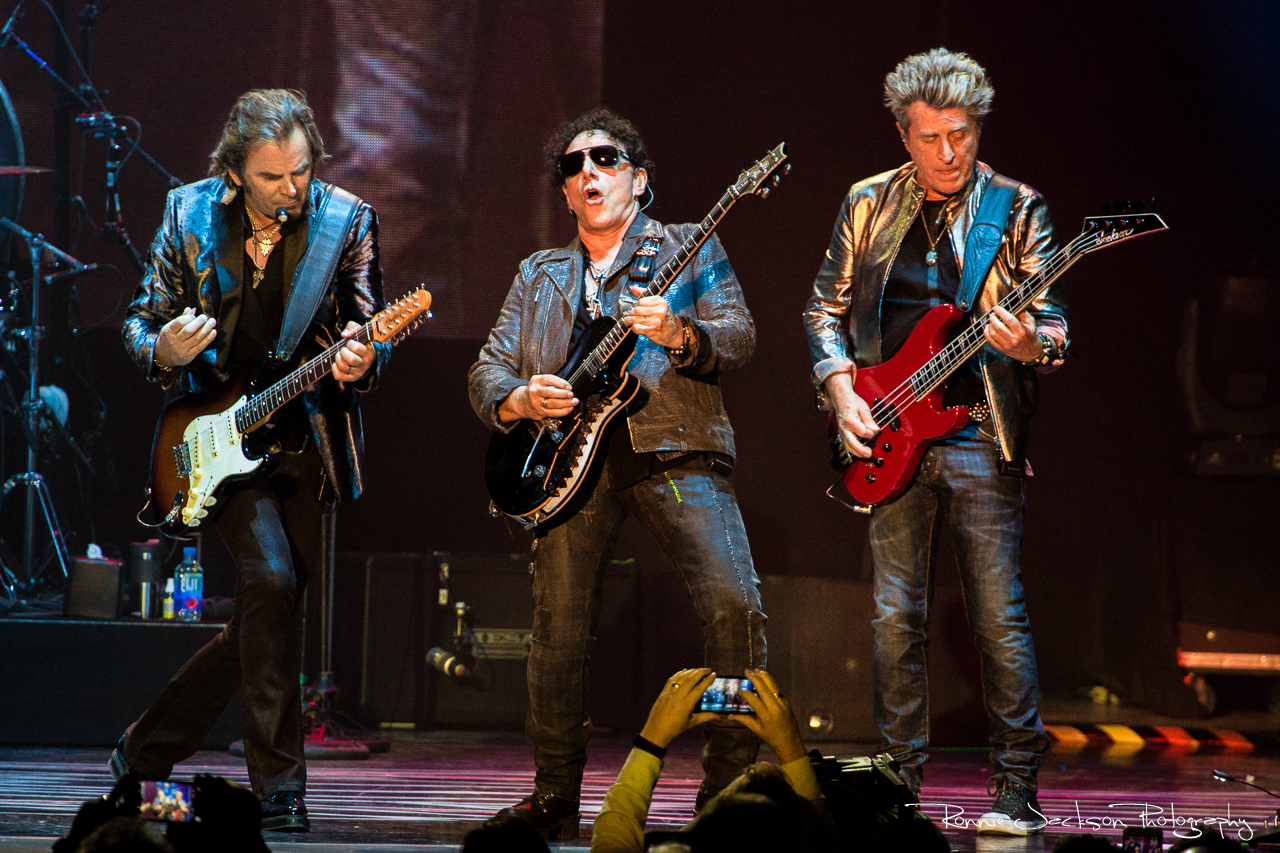 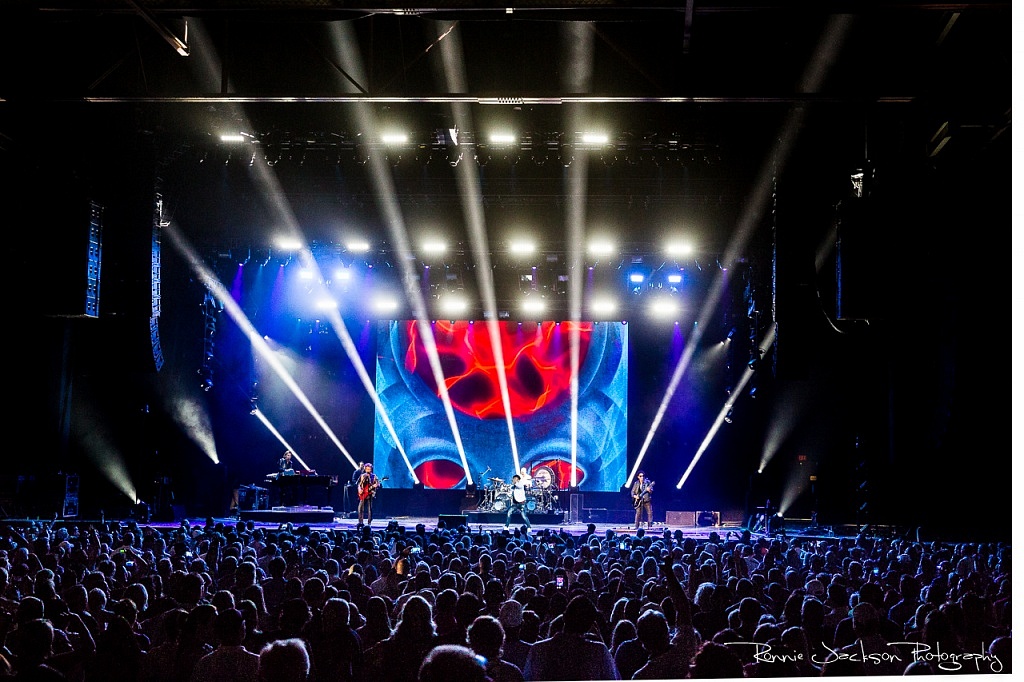 Gexa Energy Pavilion hosted a night of iconic and classic rock music this evening and quite unsurprisingly, this Dallas stop of Journey’s San Francisco Fest 2016 Tour was sold out as well more than ten thousand people flocked to the outdoor arena to see one of the greatest bands the 1970’s produced.

The crowd’s energy would wind up rivaling that of the band (which is saying something), with a rather wide age range of patrons having turned out to witness the performance, further proving just how timeless Journey’s music is, impacting people of every generation since their inception.  Warming up the spectators this night were The Doobie Brothers and Dave Mason, each doing excellent sets, though it was evident Journey was who everyone was patiently waiting for, erupting into deafening fanfare as the quintet wound their way on stage at 9:30.

One by one, each member made their way out, a relatively dark stage and faint purple lighting making their silhouettes the only thing visible, only adding to the suspense that months of waiting for this show had already built. With that, they were off, delivering a show that was comprised of just about every song fans were hoping to hear, beginning with, what else, but “Separate Ways (Worlds Apart)”. It was also the first of many songs this night where crowd participation was highly encouraged, the patrons singing loudly back at the band.  Journey seldom stopped this night, the machine-gun style pace behooving of Arnel Pineda’s behavior. The frontman was a live wire, constantly flipping his microphone around in the air as he raced about the stage, climbing atop and subsequently jumping off the risers. That went a long way toward fueling the adrenaline levels of the onlookers, especially when Pineda would egg on the crowd, always wanting more from them. It wasn’t necessarily for the band’s sake either, but more just to make sure that everyone who had paid to be here enjoyed the show as much as possible, immersing everyone deeper into the experience.

That was one aspect of the show, wanting to invigorate the spectators, though another aspect focused on camaraderie. The camaraderie between musicians that have invested the majority of their lives into doing what they love.  It was best seen when Jonathan Cain wasn’t stationed behind his keyboards, instead acting as the rhythm guitarist; he, lead guitarist Neal Schon, and bassist Ross Valory often lining up beside one another. It was obvious just how deep their connection runs and what an exceptional friendship they’ve developed over the decades as they often pointed at one another, wanting the crowd to focus more on what their fellow band mate was doing. The smiles they often flashed indicated just how genuine the feeling was, almost making you believe this was the first time they had graced a stage, as they (rather miraculously) haven’t become jaded to the performance side of things after the thousands of shows they’ve logged.

That bond was also showcased when nearly everyone got their own moment to shine, Schon being the first of the night to do a solo, demonstrating his prowess as a guitarist. Cain’s keyboard solo and Steve Smith’s drum solo were spaced out around the rest of the 90-minute long set, the latter being worked in to “La Do Da”, Smith impeccable as he showed complete control of his kit with remarkable precision.   For all of them, their moments in the spotlight highlighted just what professionals they are, being true veterans with a level of talent that can only come with years and years of touring experience. They did take time out to note this year marked the 35th anniversary of Escape (which has to be one of the most recognizable album covers of all time), and almost as a way to commemorate that milestone they played the title track from that record.

Other highlights of the night included a stellar solo by virtuoso Schon for a unique and memorable intro into “Wheel in the Sky”, while Cain mentioned he had written “Faithfully” to pay tribute to all of the hard working musicians and crew members that make shows like this happen. It was a way to show how they are always away from their families, shedding light on the struggles that ensue.  Of course, no song created a better moment than the show closer, “Don’t Stop Believin'”, during which Pineda bowed out at times, letting the audience handle the singing on some of the verses. No sooner had the final notes rang out when confetti seemingly materialized in the air, raining down on everyone, the perfect way to end the party this show had unquestionably been.  They did come back for an encore, treating everyone to “Lovin’, Touchin’, Squeezin'”, ultimately taking one final bow as they introduced one another and thanked everyone for a sold-out show.

This was more than just a night of relishing and reliving the past. Sure, it did offer people a trip down memory lane, though Journey is certainly not a band that has become stagnant nor rooted in the past because that’s where their better days are (as some acts can be). They focused on their older material because they knew that was what their fans wanted to hear and their goal was to put on the type of show they felt their fans deserved. However, all of these classic songs sounded kind of fresh this night, as they injected some new sort of vim into them.

It just reminded everyone why they had turned out in the first place. They wanted to hear some of their favorite songs and see one of the most iconic bands that is still active, and for their dedication, they got a show that, in its own little way, was a totally unique experience, and an incredibly fun one to boot.