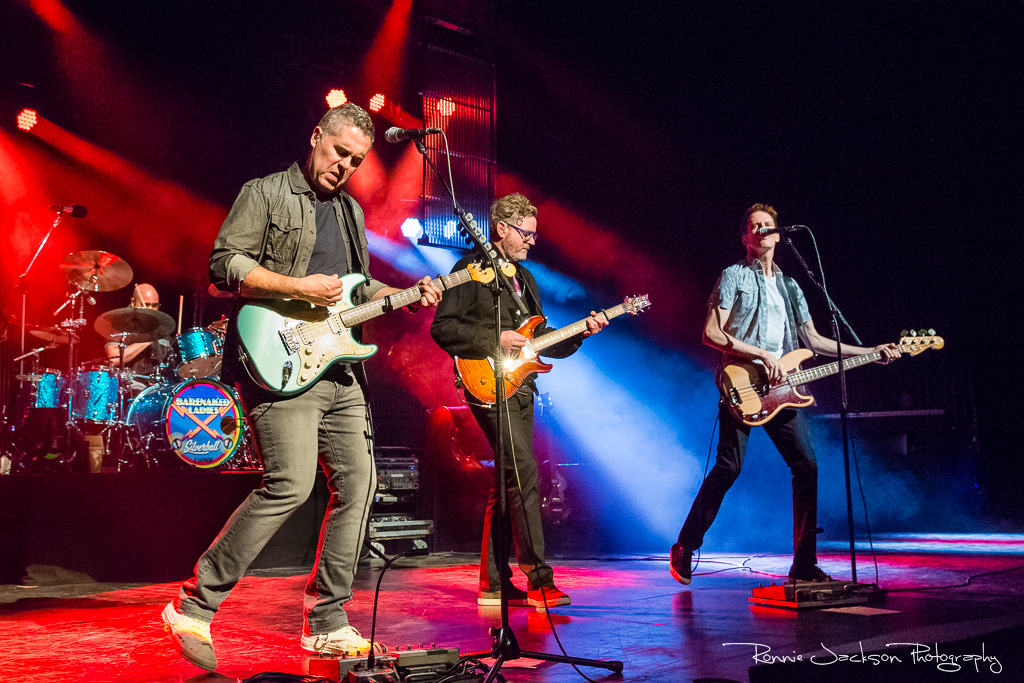 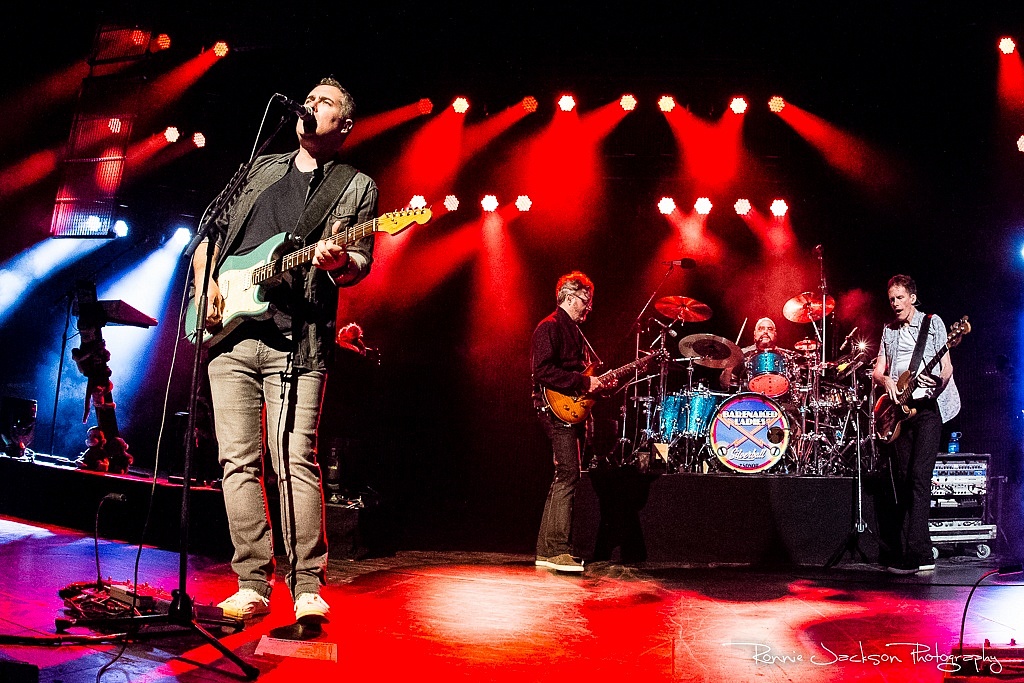 Oddly enough, the Barenaked Ladies show at Verizon Theatre this night was not sold out.

I know it was a hump day, but still, with few events to contend with, their Last Summer on Earth Tour—on which they were joined by Violent Femmes—should have been the hottest ticket in town. Still, the 1,500+ people that turned out were eager to see the bands who have made such illustrious careers for themselves.

For many, they were probably wanting to go back to their younger days, at least for a night, as the majority of the crowd was made up of more middle-aged patrons.

Violent Femmes was the perfect opener for this show, their brief set leaving the crowd wanting more; while everyone patiently waited out the near half hour in-between bands, some leaving their seats to go up to the stage and get a picture with the gear in the distant background. 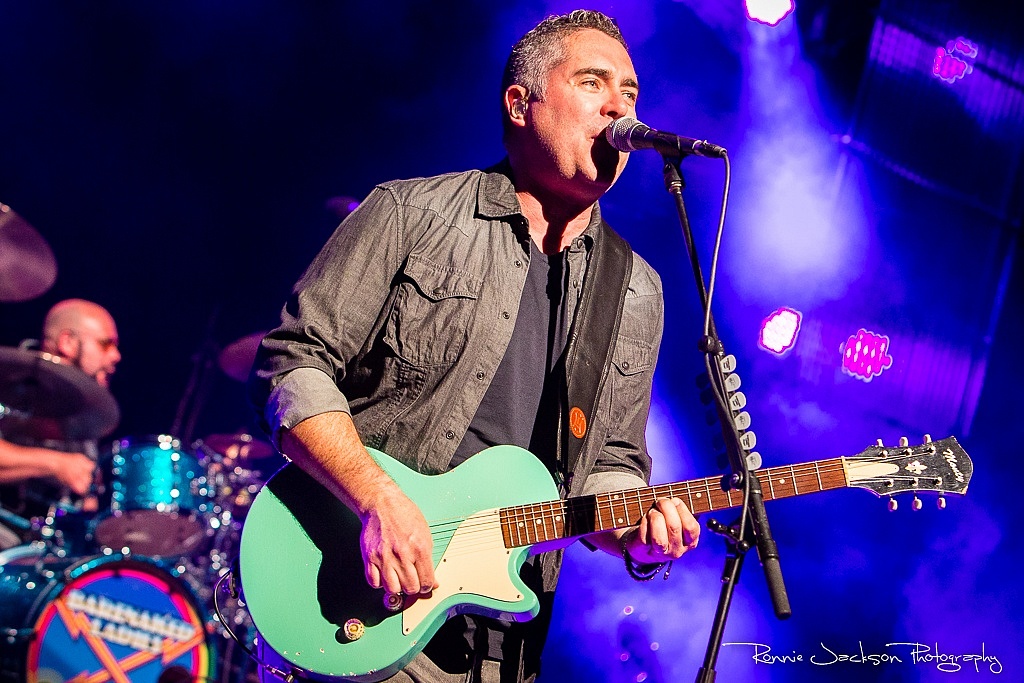 The lights dimming right around 9:30 sent the spectators out of their seat, standing up, while parts of a pinball machine flashed across the few segments of screen that were set up. The familiar sounds of the arcade game filled the sizable venue.

With this tour being in support of Silverball, they played a good helping of cuts from the album (nearly half of it!), beginning with the opening track, “Get Back Up”. The song works perfectly for the band, part going with their own lives even of being an aging rock band who may not be able to compete with some of the kids (i.e. younger bands) these days—well, at least not in most kids’ opinions—but they still have a few tricks up their sleeves.

Right away, the production, as in the way the quartet executed things, was quite remarkable. That was one of just a few songs that saw Ed Robertson wielding an electric guitar this night; the high-energy song letting them come out swinging. 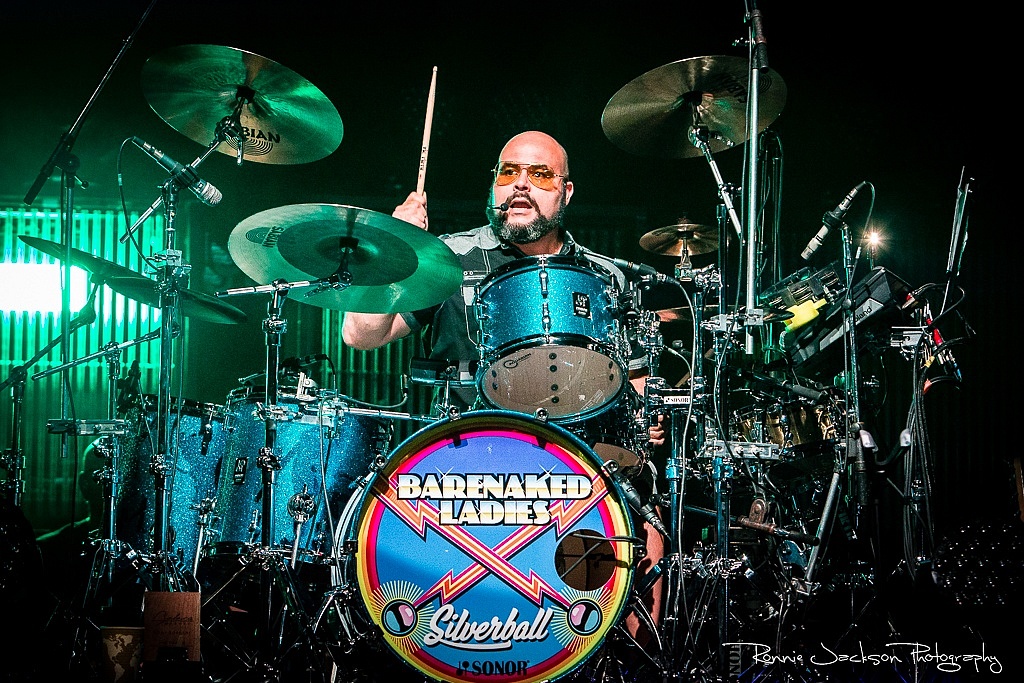 The fans rejoiced as the group went almost directly into “The Old Apartment”, almost like the song was an old friend they hadn’t seen in awhile. From revisiting and reminiscing about the past they went into the upbeat “Odds Are”, the airy quality about it having a real calming effect. During it, Jim Creeggan let his chops shine, owning it on the bass as he trekked across the stage, a smile always on his face, getting even more vibrant when he was making a connection with the onlookers.

They encouraged some participation on “Gonna Walk”, the crowd helping out on the chorus, which provided Robertson one of his first chances of the night to show off his comedic skills, asking people to look around and that anyone who wasn’t singing along was “a racist”. Afterwards, he then shared a nice anecdote with everyone, mentioning a recent stop at a Brazilian steak house, a restaurant he knew little about. He said he didn’t eat anything off the salad bar as he didn’t want to fill up beforehand, thinking he was being smart. Unbeknownst to him, the sign that you’re full is to turn a coaster over so the red side is showing instead of the green, meaning you don’t want any more meat. Robertson was clueless to that, saying the waiter just kept bringing more and more out, and he wasn’t sure why he continued to do so. The crowd was dying laughing over that story.

This night was filled with different moments similar to that, from anecdotes to other things all of which succeed in humanizing the band. It’s easy to put musicians of BNL’s caliber on a shelf of sorts, but throughout the night, they came across no different than your average Joe. 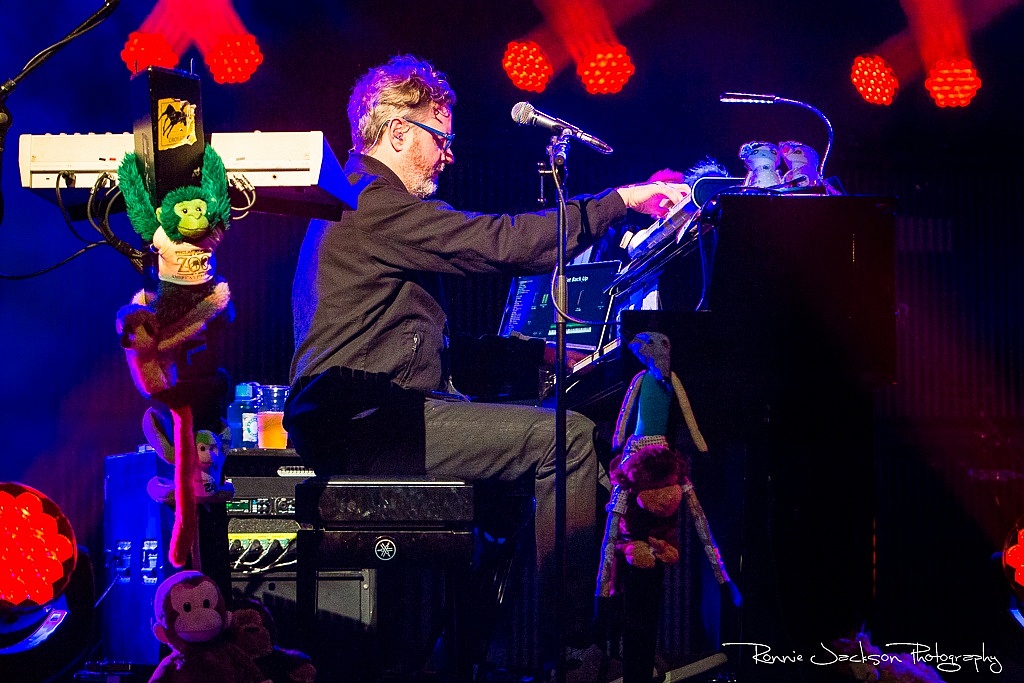 The variety spanned several albums, even going all the way back to their 1992 debut Gordon with “Brian Wilson”, which was arguably one of the strongest songs of their performance, being lively and riveting. It was shortly after that classic that they did something truly special.

Also joining them on this tour is Colin Hay, the former lead vocalist of Men at Work. A solo set from him had set this show in motion earlier in the night, and around the halfway point of BNL’s show, he returned to the stage. Also joining them was the saxophone player of Violent Femmes, creating the perfect environment for a cover of Men at Work’s “Who Can it be Now?” Robertson relegated himself to backing vocalist, Hay being in complete control of the song, just the way it should be; though that didn’t stop the Barenaked Ladies singer from cracking afterwards that that was the best song he had ever written, and Hay did it justice when he gave it to him. “Not too bad, since I was only eleven when I wrote it,” he added, chuckling.

Hay wasn’t done for the night, though left for the time being; “Piece of Cake” being another new jam they cranked out. It came with a story, Robertson saying there was a more boring stretch during an instrumental bridge, and while recording it, the producer said either something spectacular need to go in there or the segment should just be trimmed out. He was beaming with pride when he said his two sons were visiting him in the studio, his middle son picking up the guitar and riffing a solo, a solo they used to fill that space. As it turned out, his son was there this night, appearing from the wings and delivering that blistering solo during the tune. 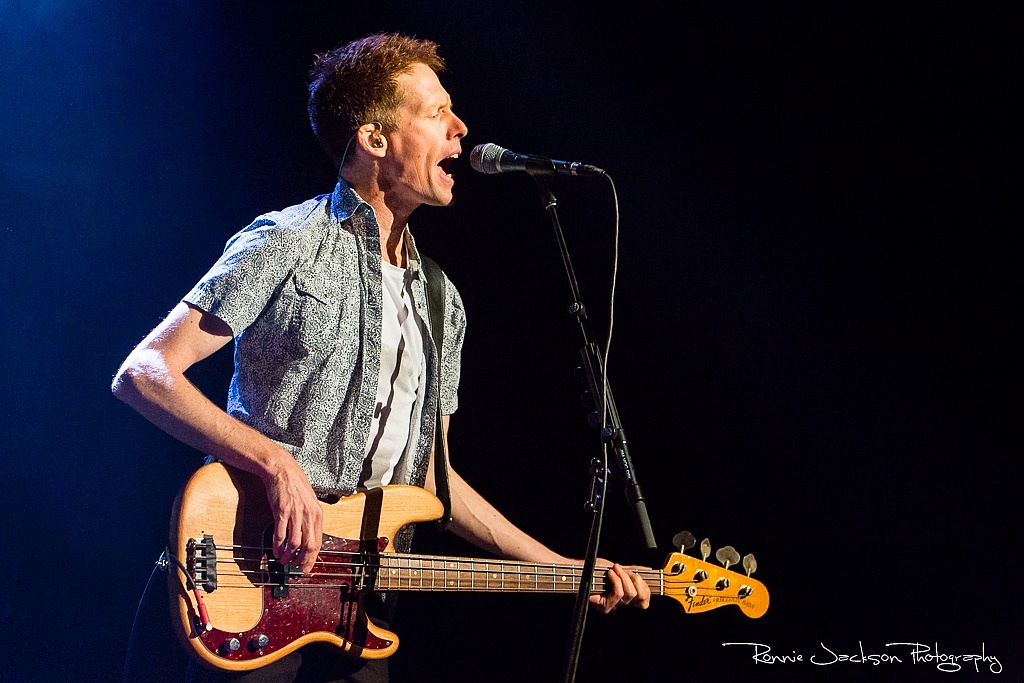 Kevin Hearn took the reins on “Passcode”, the multi-instrumentalist who had been alternating between keyboard and guitar duty providing the lead vocals on the sweet love song.

The fan favorites had, of course, been reserved for the final stretch; “Big Bang Theory Theme” being a fun one to hear (I had no idea there were four more verses or so to that tune), while “One Week” had the throng of fans singing along to it, with the same behavior going on during “If I Had $1,000,000”. To round it all out, they did their signature rap/bit of randomness, which found them doing snippets of a host of covers. The crowd was roaring, making that a good one to take their leave, but only after shaking as many hands as they could of the people down in front.

For their two song encore, they switched things up a bit. Drummer Tyler Stewart grabbed the primary microphone, while Robertson seated himself behind the drum kit. Though he had been killing it as the drummer this night, Stewart really got to shine on “Drawing”, racing here and there, even turning his back to the crowd and shaking his butt in a way that would probably even have some exotic dancers envious. Their parting gift to the crowd then came in the form of “Rock and Roll”, as they put their spin on the Led Zeppelin classic. 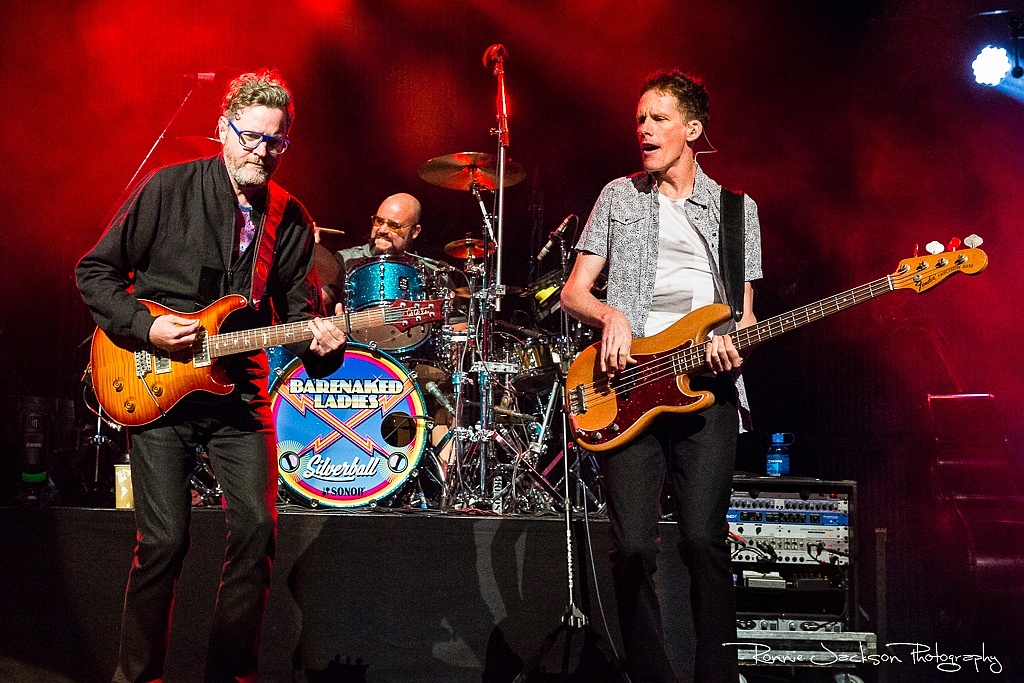 I realize I was most likely the only person in attendance who had never seen Barenaked Ladies before. Not only that, but in all honesty, I’m not very versed in their music (they’ve got about a year on me, so even though they’ve stayed very relevant for their entire career, when I did start getting into music, their stuff was just something I never listened to.)

That said, I was impressed by something that most of their fans probably take for granted at this point, the fact that their show really is just four people getting up on a stage and having a blast. They were all smiles throughout, often cutting up with one another or the crowd. That’s not something every band does, especially not after nearly three decades, during which I could see how you could start viewing performing as being a job, doing it and getting it done. Not to say BNL didn’t take themselves seriously this night, though they had plenty of fun in the process.

It made them seem so grounded, and that was the most enticing thing of all about their show, because not only were they sharing their music with the crowd, they were sharing a portion of themselves.