In the first three years, most bands are still cutting their teeth, working on building their fan base and starting to hit the road to other areas in their home state, and even surrounding states.

Keyword, “most”, and the New York based Cults does not fall into that category. Since their inception in 2010, they’ve released two albums on Columbia Records, the most recent one being “Static”, which was only a few weeks old by the time their tour in support of it led them to Trees in Dallas, placing them in front of a crowd who was eager to hear their indie rock goodness. 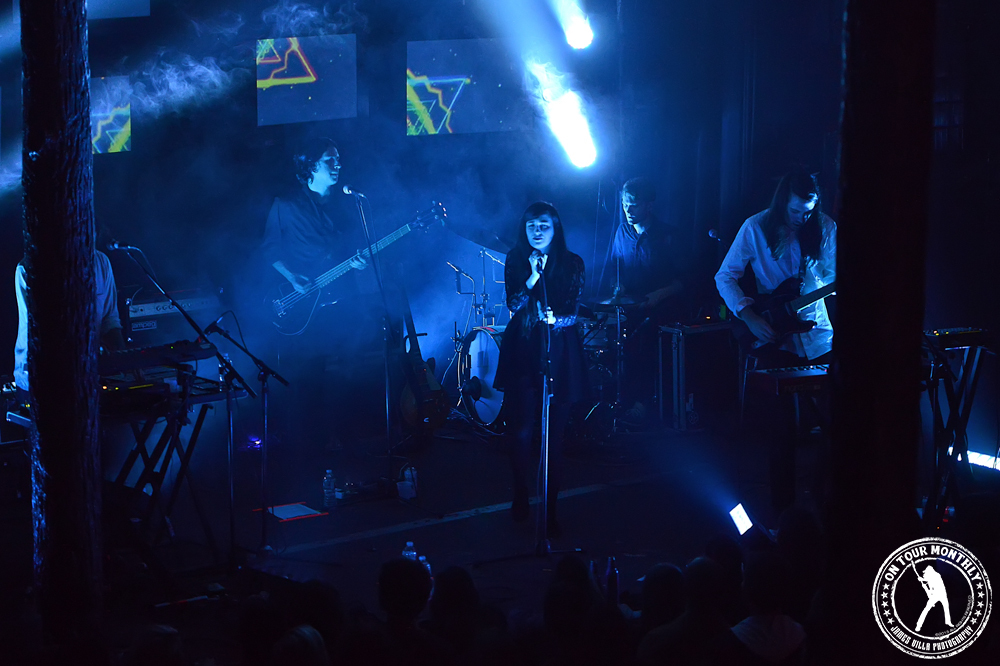 The crowd was pretty thin at the start of the night, but by the time ten o’clock at rolled around, the venue looked like it was pushing capacity, the fans packing in as tightly as possible.

The excitement mounted as the intro song began, many of the fans looking at the stairs, waiting for the members to descend from the green room. They had to wait a few more minutes, though, as the music went on, becoming a song in its own right. It was very soothing and hypnotic with a nice ebb and flow that, in a way, was reminiscent of being on a beach and hearing the water hit the shore, before going back out an repeating.

They also made sure the show was as visually stimulating as possible, having eight “screens” that varied in size and resembled TVs hung on the back of the stage, which showed an array of tings this night, but started with what looked like that snowy image TVs would display when you couldn’t pick up a channel.

After a few minutes of that, the audience was finally able to unleash their pent-up excitement, cheering and applauding Brian Oblivion, who welcomed the fanfare as he took his spot behind a set of keyboards, and was followed by drummer Cory Stier, bassist Nathan Aguilar and guitarist and keyboard player Gabriel Rodriguez. Madeline Follin then came bounding down the stairs, taking her place behind the mic at center stage. 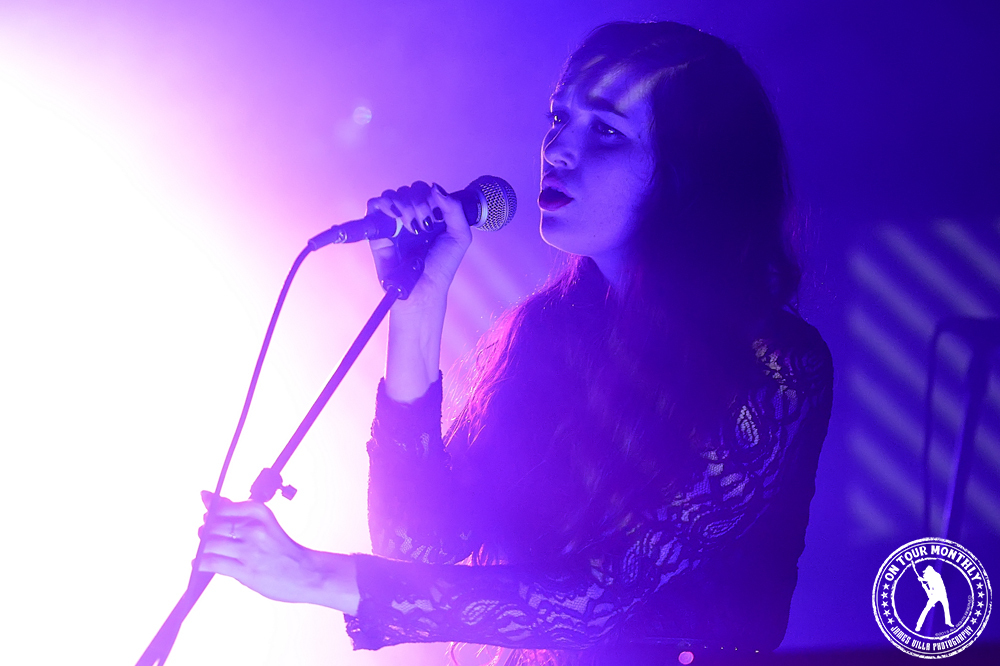 They opened their 45-minute long set with the dreamy sounds of “High Road”. “Thank you!” Madeline exclaimed in a peppy voice as soon as she had sung the last line of the song that had captured most everyone’s attention, but it was the next song, which came from their self-titled debut, that enthralled the crowd. Brian donned his guitar for “Abducted”, and while the song’s filled with heartache in the lyrics, it’s undeniable catchy, resulting in everyone moving around, either dancing in their spot or bobbing their head to music.

The applause was much greater for that song, showing that while it’s not that old of a song, it’s still a classic for Cults, and the rest of the songs they did from their first record this night seemed to get the same result. Upon finishing it, Brian addressed the crowd, welcoming to what he said, as best as he could remember, was the first ever Cults headlining show in Dallas. “…We’re going to play some new songs and old songs for you all tonight…” he stated, before setting his guitar down to again focus on the keys.

They cranked out another new one, “Always Forever”, the more minimalist sound allowing Madeline to show off her full abilities as a singer, her voice truly dazzling on that track. “That’s for all the beautiful couples…” Brian announced when the song was done, again reaching for his guitar, as he continued to rotate, using it on every other song. “Never Heal Myself” was quite possibly the most heavenly song they did this night, the keys, guitar, drums and bass, and even the xylophone, creating a gorgeous tapestry of melodies, which in some ways made the track seem like an anthem. It actually was, too, with the core message behind it being not to change who you are just to please someone, which is something everyone should take to heart.

The mood was again brought down with “Most Wanted”, though no one minded it, and afterwards Brian declared they were going to do another rock song. He readied his guitar for “We’ve Got It”, delivering on that rock song promise, as the tune was easily the best of their show. The driving drum beats gave it a certain intensity that set it apart from all of their other songs, and was also quite lovely when Madeline sang part of the song nearly a cappella, on one of the last lines, “…We’re not here waiting up for you, there’s no more time for that…”

“Here’s another one for the beautiful lovers.” said Brian, dedicating “You Know What I Mean” to the couples in attendance, which was also the last song he played the keys on for the night. The final notes that resonated helped bridge them into “Were Before”, one of the few songs that saw Brian doing some lead singing on a verse or two on the enchanting rock number. It was followed with the subsequent track from “Static”, “So Far”, before they tackled another track from “Cults”, “Bumper”. The duet was an interesting change of pace, and another standout of the show, with one of the best parts of the song coming after Madeline sang, “Maybe I should start a life with someone new, and give up all my hopes for…”, pausing as is done on the recording, though it seemed lengthier here. The crowd was silent for it all, no premature applause, while she flashed a huge smile at everyone, before they dove back into it and finished up.

As their set neared its end, they did another fun jam, “I Can Hardly Make You Mine”, then concluded with “Rave On”, Madeline exiting the stage once she finished singing, quickly uttering another, “Thank you!”, as she left Brian, Cory, Gabriel and Nathan to finish it up.

An encore was certain, and the audience stood pretty still just waiting for it. Sans a few people, there wasn’t even any real demand for one as far as chanting goes, probably because everyone knew it had to happen.

“…We had to do some shots…” Brian said after coming back on stage a minute or so later, pointing out that when the clock struck midnight, it would be Madeline’s birthday. This led to a few cries of “Happy birthday, Madeline!” once she returned to the stage

The dance inducing “Keep Your Head Up” came first, though it was the next one that the crowd had been waiting all night to hear. No sooner had Gabriel started striking the xylophone, then the fans cheered with enthusiasm, realizing it was their successful single, “Go Outside”. Everyone could leave happy now, but before this 11-minute encore section ended, they had one more song to do.

Brian used the short break in between songs to again thank everyone for seeing their first headlining show in Dallas, rattling off a few other things before closing with, “Go Cowboys!” They then launched into “Oh My God”, which brought this delightful little party to an end. 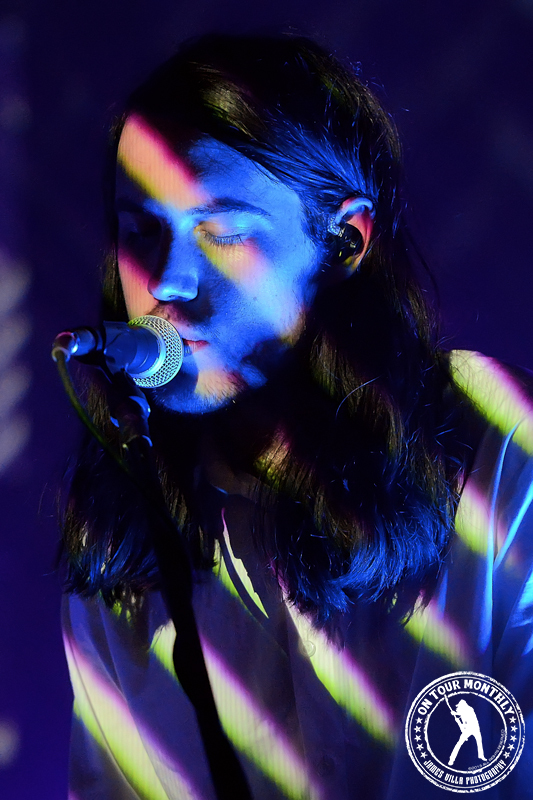 I have to say, Cults ended up being much more fun than what I was expecting. I had only (very) recently even listened to any of their music, and while their two records sound great, you get a completely different experience at one of their shows.

They’re incredibly dynamic, being very well polished with a mesmerizing stage persona and a highly entertaining live show. Then you have their music, which is very original in my opinion. I can’t think of a single band I’ve ever heard that, in its purest essence is a type of rock group, but intertwines the music so well with other genres, in this case a mix of pop and even some dance vibes. There were more than a few songs they did this night that had me wondering if I should be banging my head to the beat or grooving to it, with the best answer being to do a little of both.

There are a multitude of reasons why people go to concerts, and they stretch far beyond simply being a fan of the band, and I would guess the biggest reason is to forget about your day-to-day worries, and just be able to cut loose for a while. Whether they were aiming to do that or not, Cults succeeded in it, getting everyone lost in the moment for that near hour they spent on stage, eventually leaving the crowd feeling more joyous than when they had first arrived.