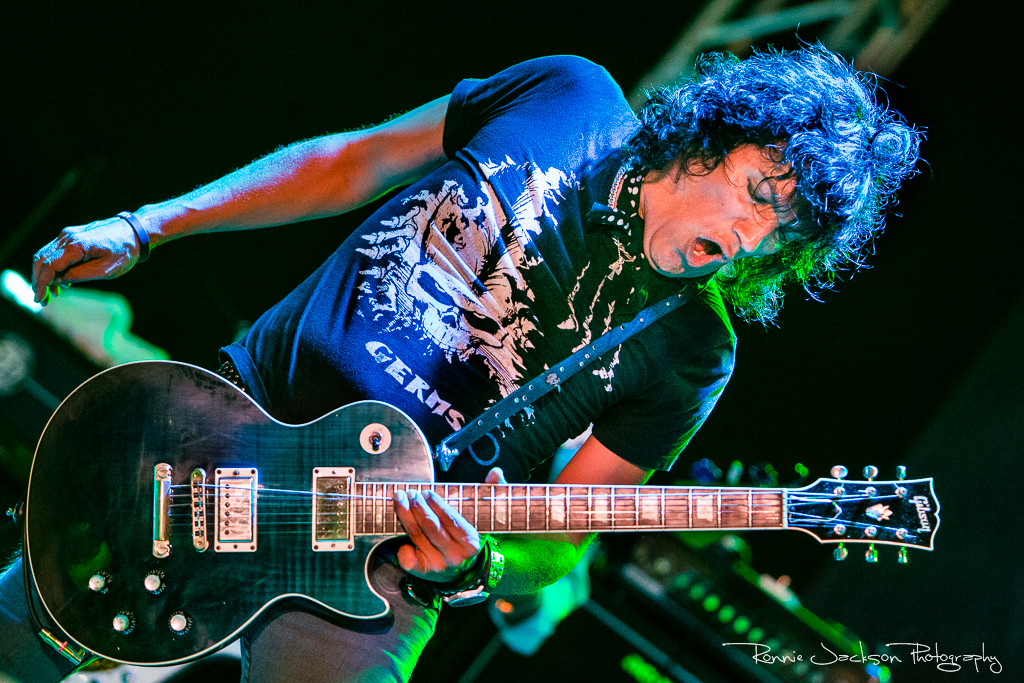 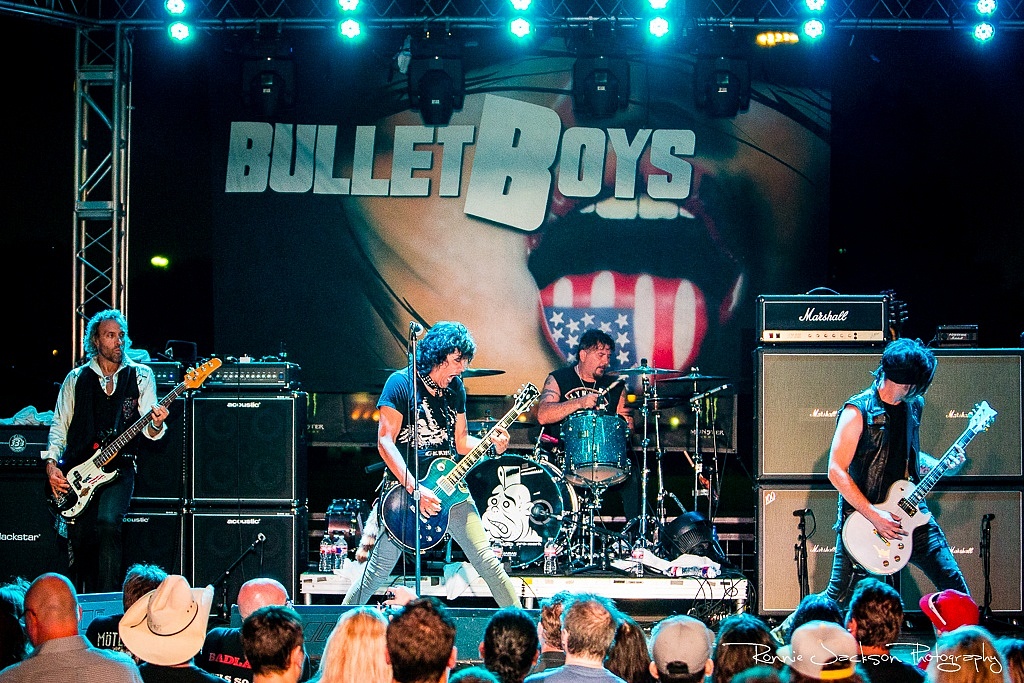 Gas Monkey Bar and Grill in Dallas TX was the place to be on this Thursday night. Yes it was 100 degrees and sticky, but this didn’t slow down the large gathering of fans ready to see the icons of rock and roll that most of us grew up with. Well, at least you can include me in that category.

It was going to be a hair metal night complete with flashbacks to the 80’s. The lineup would include openers The Bang Angels and Killer Bee with Paul Chapman from UFO with The BulletBoys and LA Guns’ Tracii Guns (aka Gunzo) co-headlining the show.

I arrived in time to catch some of Killer Bee and those guys are great. They are a Swedish-Canadian band and they fit right in with the 80 style classic rock/metal that would continue throughout the night. One of the coolest parts of their set was when Morgan Evans performed his drum solo with flaming drumsticks and no stage lighting. It was definitely a cool factor to an already very cool drummer. 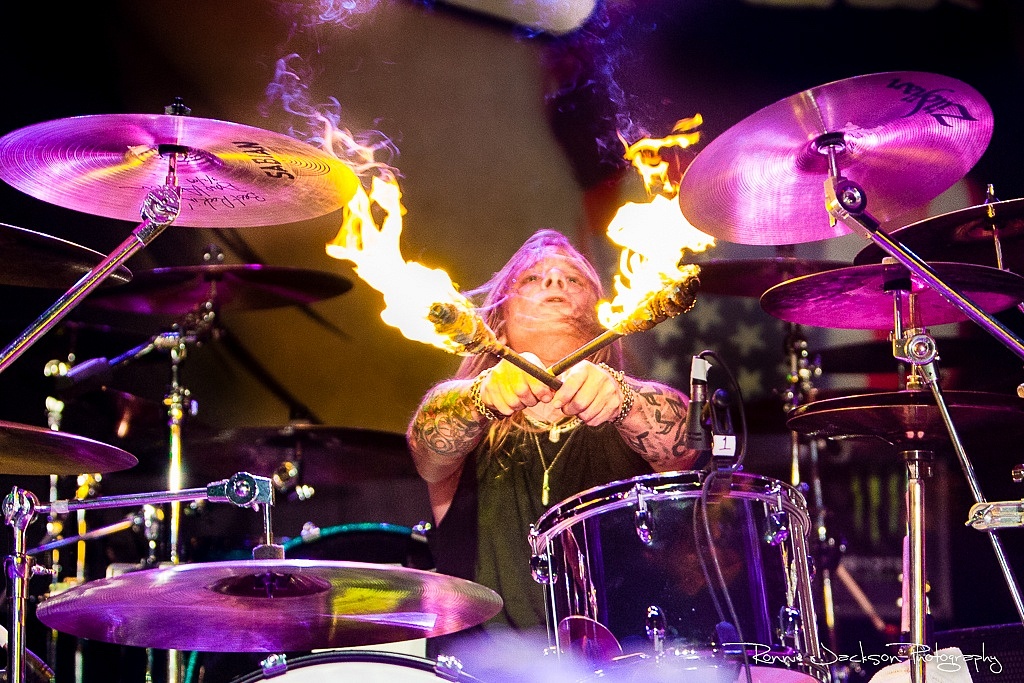 The Bullet Boys were up next. I was looking forward to their set, as it had probably been twenty-five years since I had seen them. Their entrance to the stage seemed to be taking longer than normal, but everyone continued to enjoy their drinks and cool off. Then we noticed the stage crew began to take down the Bullet Boys backdrop and replace it with the Gunzo backdrop. Nobody knew what was going on and we figured they just swapped set times since they were both co-headlining. A few minutes later Tracii Guns, Rudy Sarzo (Quiet Riot, Ozzy, Dio, Whitesnake) and Shane Fitzgibbon (Jeremia Mountain) came out. They said some issues had come up and that they were going to just jam for a bit, while it got resolved. Tracii asked if this was ok with everyone and got the perfect response he was looking for. 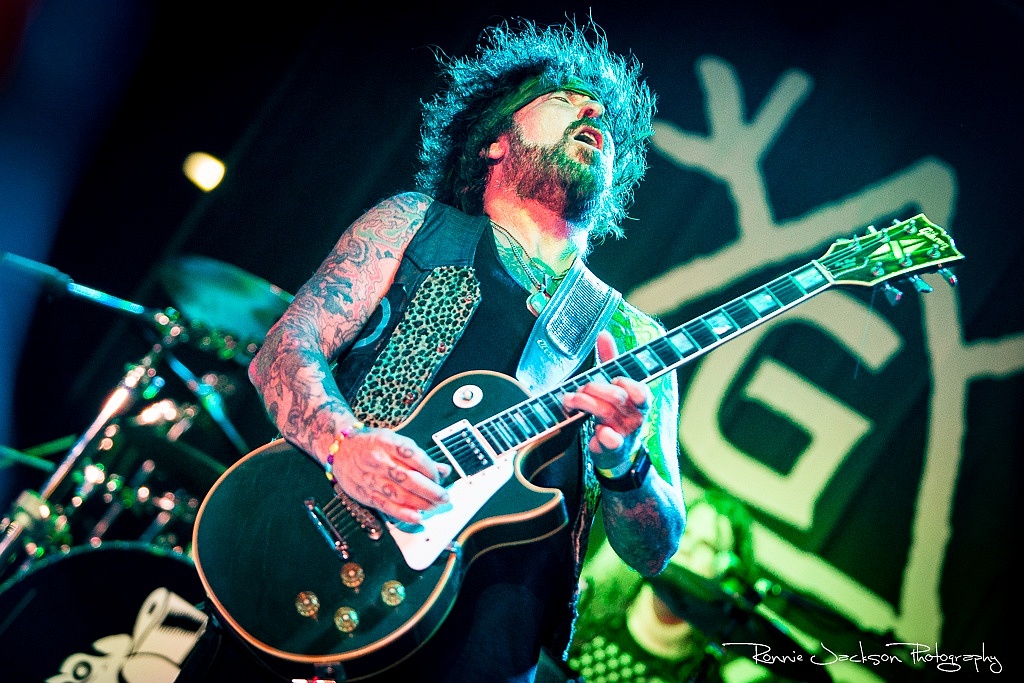 Even though we still didn’t know what was going on, nobody cared. These guys were legends. Whatever they wanted to do was fine. The trio jammed on some bluesy rock and roll for about 15 minutes before Keith St. John (Montrose) came out and they began the Gunzo set.

Apologizing for the delay and asking if we enjoyed the little jam we had just witnessed, St. John stated that they would be playing songs that spanned each of their respective careers. With that, we enjoyed over an hour of covers from LA Guns, Ozzy, Whitesnake, Montrose, Dio and Quiet Riot. I have to admit, this was probably one of the coolest performances I have seen in a long time and I think everyone else agreed. You could tell these guys thoroughly enjoyed playing these songs. It was pretty much second nature and engrained into who they are, so it afforded them the opportunity to show off and do things like play each others’ guitars, hold them out over the audience and let fans play, etc.

It was truly an amazing performance.

The backdrop was replaced with The Bullet Boys backdrop and we knew it wouldn’t be long now. Marq Torien and crew took the stage as he screamed, “What the fuck is up Dallas?!” He went on to explain that he had suffered a mild heat stroke earlier in the day and needed to rest and re-hydrate as much as possible. The later set time also afforded him a cooler temperature, but it was still 88 degrees when they took the stage at 11:30.

He thanked everyone for sticking around and said there is one thing that he will never do, and that’s miss a show. “So, here I am Dallas!” he screamed as they began their set.

It was a slightly shorter set than normal due to the time, but for 45-minutes, Bullet Boys gave it their all. Had he not mentioned the heatstroke incident, I don’t even think anyone would have noticed. They cranked through their set as if they were in their 20’s again, starting off with “Hard as a Rock” and following that up with “Hell on My Heels”, both of which were two of my favorites.

They also played an O’Jays cover, “For the Love of Money”, which Torien showed some of the true power of his vocals. Then, to finish off the night, they left with everyone’s favorite song, “Smooth Up in Ya”. Upon finishing it, Torien thanked everyone again and said that they would be sticking around to talk to fans, take pictures and sign things. That was a common theme with all the bands that performed this night, and a luxury that the fans really appreciate at the smaller venues. 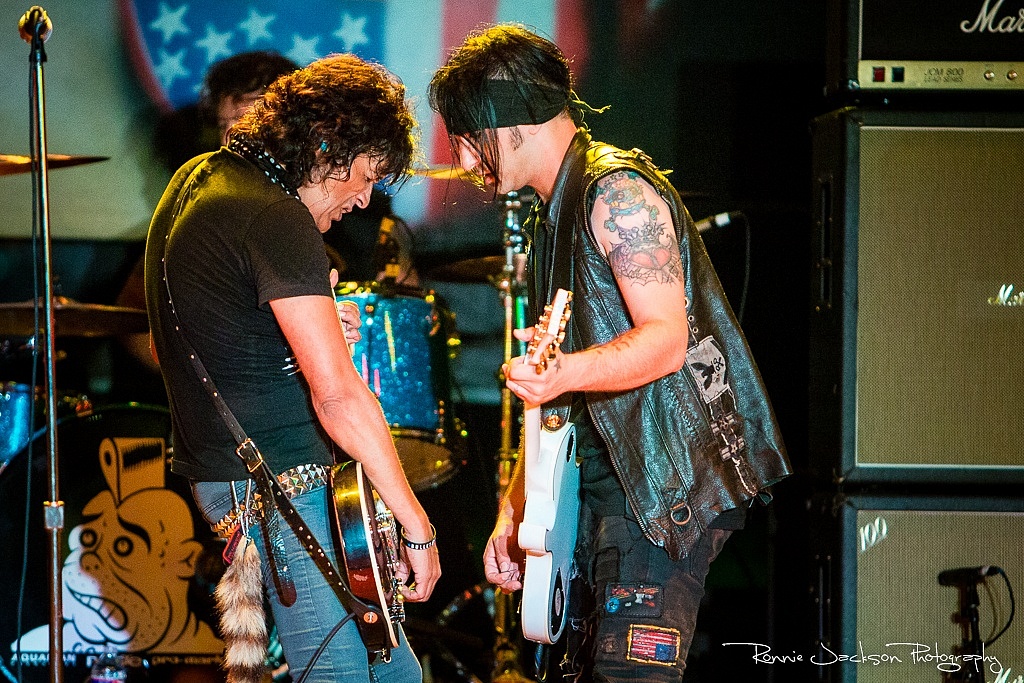 Overall, this entire night was an exceptional night of old school rock and roll from the 80’s presented by some of the most iconic bands of that time. It may not be the 80’s anymore, but this stuff lives forever.