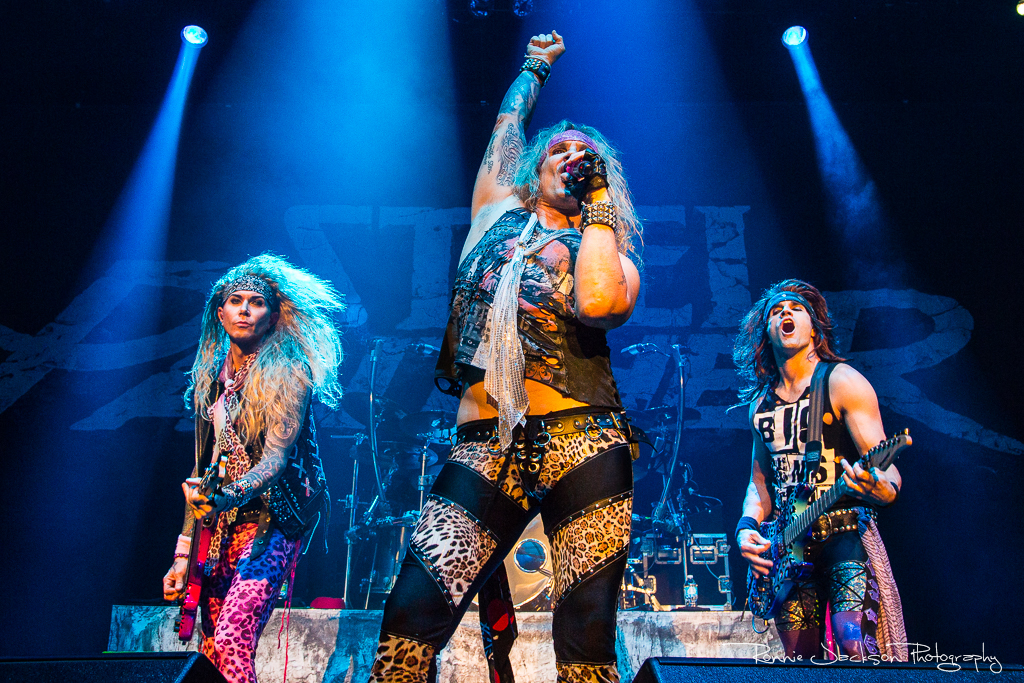 Personally, and for that sole reason, I thought Steel Panther was and odd opener for Judas Priest as the legends trekked across the US on their Redeemer of Souls Tour. However, it wound up not being as different as I anticipated.

Now, there’s absolutely nothing wrong with Steel Panther. I first saw them back in the summer, before getting a second serving at the Louder Than Life festival just a month before this, and the raunchy, over-the-top antics they are known for make it nearly impossible not to like them. 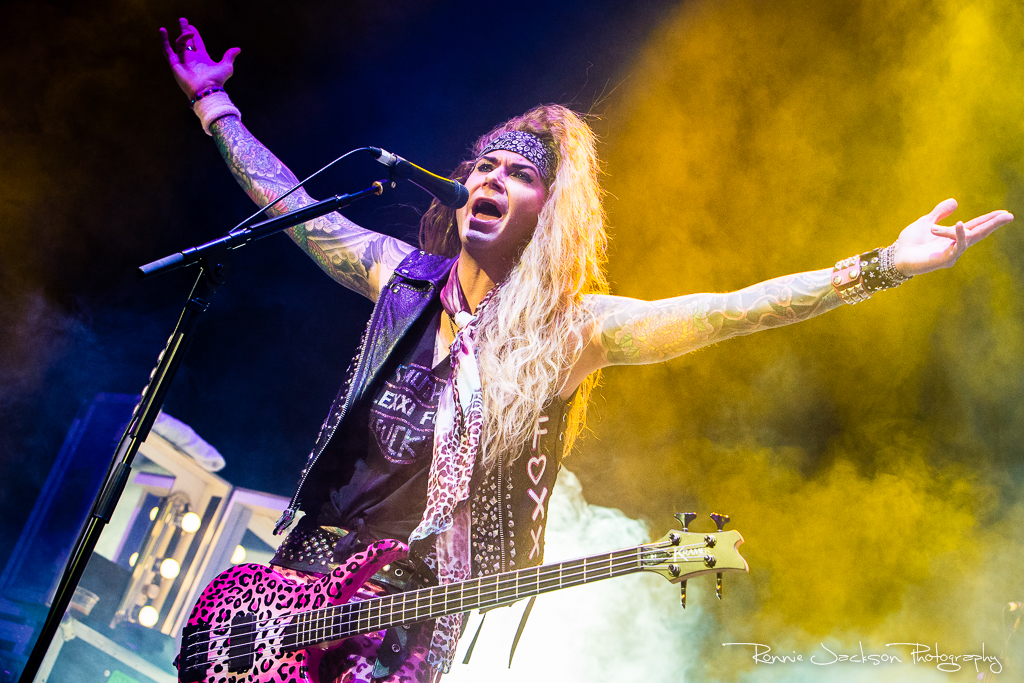 As it ended, Foxx took an early break, going over to a little make-up cabinet he has, touching everything up. That was when their glorious banter began, taking at least ten minutes out to continue killing the crowd by inducing fits of laughter, like when Starr declared they were going to “make this place a pussy fucking palace.” “You sounded great!” Satchel told the frontman, “Even the parts you didn’t sing sounded good!” he added, completely seriously, before turning his attention to the onlookers, saying if they didn’t get the crowd warmed up, then they wouldn’t be getting their seventy-five bucks for the night.

The wisecracks continued, from Satchel telling anyone who couldn’t see too well that Bret Michaels hadn’t gained eighty-five pounds and started singing for Steel Panther (Starr later defended himself by remarking he wasn’t a fat version of Michaels but a skinny Vince Neil.) From mentioning the distinct honor of being voted one of the Top 20 bands to come out of Burbank in the last three years, to talk shifting to jobs, something Starr said the following of, “A job is for guys who can’t find strippers to support them.” (That won best line of the night in my opinion.) They each introduced one another, like when Foxx was introduced as making it look like Farrah Fawcett had risen from the grave, who in turn gave it up for the best drummer in their band. That stuff is gold. 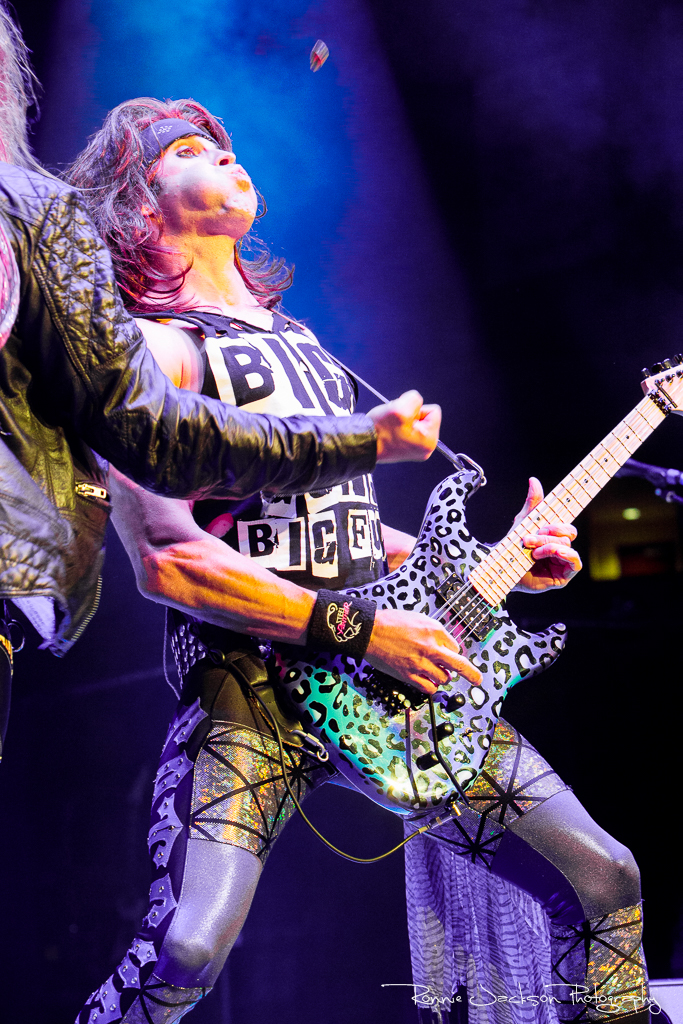 Also gold is “Asian Hooker” and “Just Like Tiger Woods”, which followed in quick succession, as they went from one bawdy song to another, the first dealing with exactly what the title suggests, while the other is about learning from Tiger Woods’ mistakes, and making your indiscretions a little more discreet.

“…How many of you are never seeing us again after those two songs?!” Starr asked afterwards, before picking out one woman in the crowd and making some crude, albeit hilarious remarks about her grooming habits. “No one wants it to feel like they’re going down on a guy from Duck Dynasty,” the singer told her before doing one of their biggest hits and the amazing balled, “Community Property”. I love how it sounds like a legitimate love song, until you get to the chorus. Their signature “Eyes of a Panther” followed, before some more antics, where they talked about aging, like how you start losing your hair. “There’s Rob Halford in the front row!” Satchel suddenly said, and he was extremely giddy. “Oh, no. It’s just another bald guy,” he said disappointed. 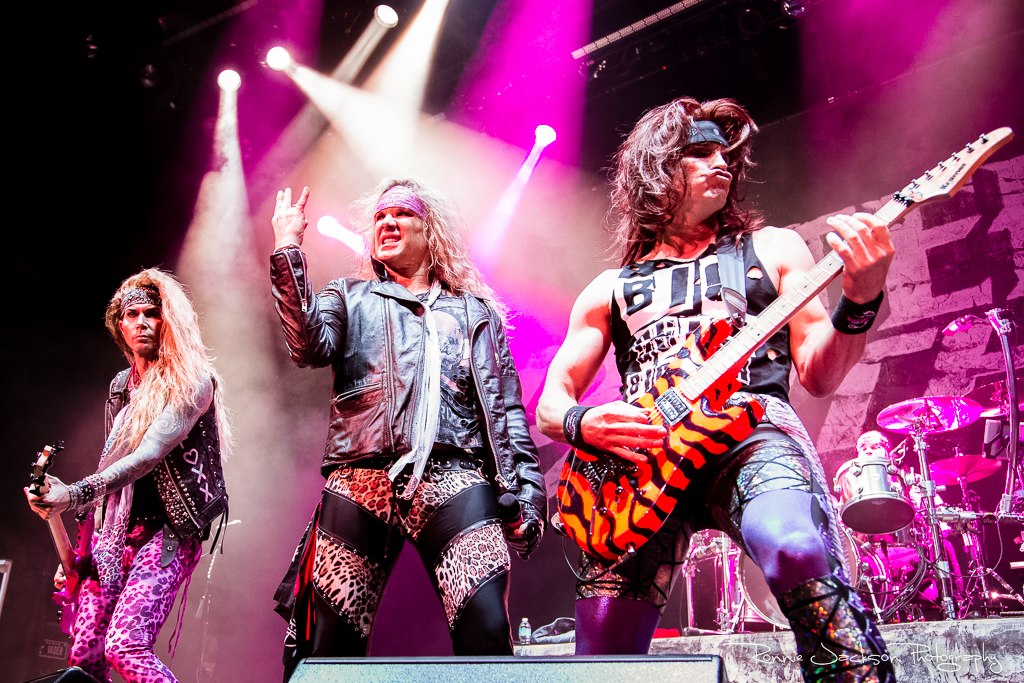 Something that was new (for me) was a brief bass solo Foxx did, where his band mates surrounded him as the three of them struck some poses. The pairings continued with “17 Girls in a Row” and “Gloryhole”, the second one being one Starr really wanted the spectators to get into (no pun intended. Well… Maybe.) He tried to get people waving their arms back and forth, something many did. “Or you could do this,” he noted, before standing there with a sullen look on his face. Yeah, the waving was much more fun.

It was during that one that a woman caught Starr’s eye, and he sang part of the song to her. Another extraordinary conversation followed (I won’t even get into this one), though it did seem like a perfect setup for “Party All Day (Fuck All Night)”. Starr again requested the woman he had noticed earlier be given a backstage pass, before eventually inviting her up on stage for their closing number, “Death to All but Metal”. The woman appeared right at home up there; and making out with the band members was the tamest thing she did. 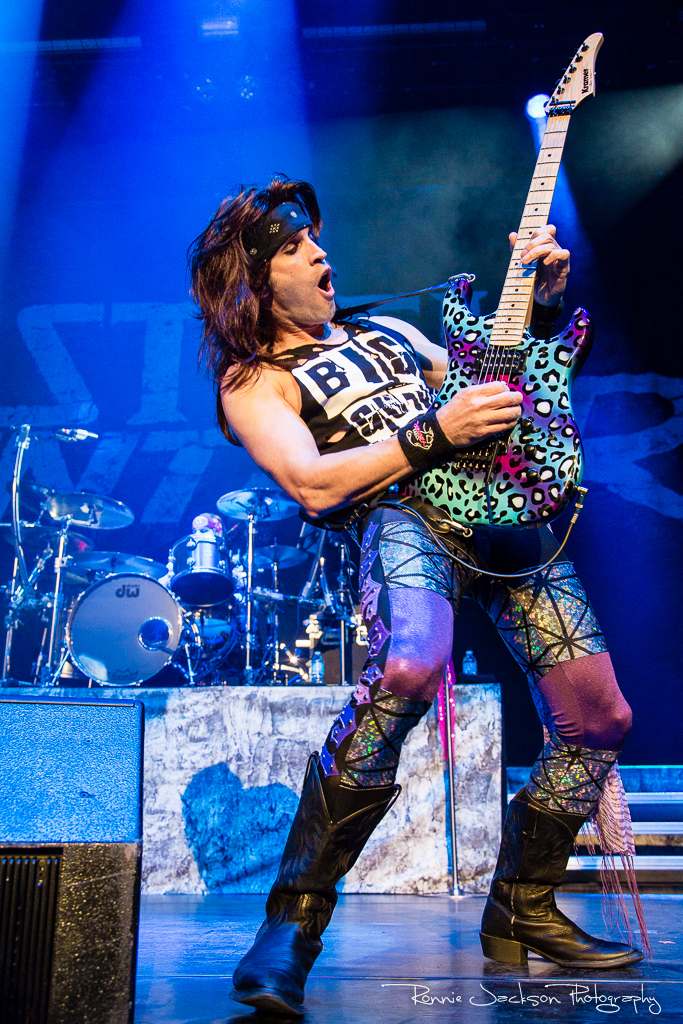 That concluded their performance, which either entertained or offended (but mostly entertained), as they took their bows to massive applause.

Steel Panther isn’t for everyone, but if you have a twisted sense of humor, you’ll love it. The first time I saw them it was an overload, but after you’re use to the dialogue, it’s not as shocking. Though they do change it up to keep things fresh.

They may be a parody band, and one that is a send-up of the 80’s era metal bands, but Steel Panther is more than that. Sure, they have their niche, and they fit it well, but they’re also incredible musicians. You really can marvel at their skills on their respected instruments, and that’s no joke.