The Los Angeles based family band Haim, which is comprised of sisters Este, Danielle and Alana Haim, as been around for a while. About seven years to be exact, though the sisters focused on other things during that time, from college to other musical endeavors, which essentially put Haim on the back burner.

It wasn’t until last year when they released their first ever record (the “Forever” EP), and now, barely a week after the release of their debut full-length, Days Are Gone, they’re making some waves. They had wrapped up their first weekend of Austin City Limits, and will be on the road almost nonstop through March of 2014, yet this night, Haim found time to make a pit stop at Trees in Dallas. 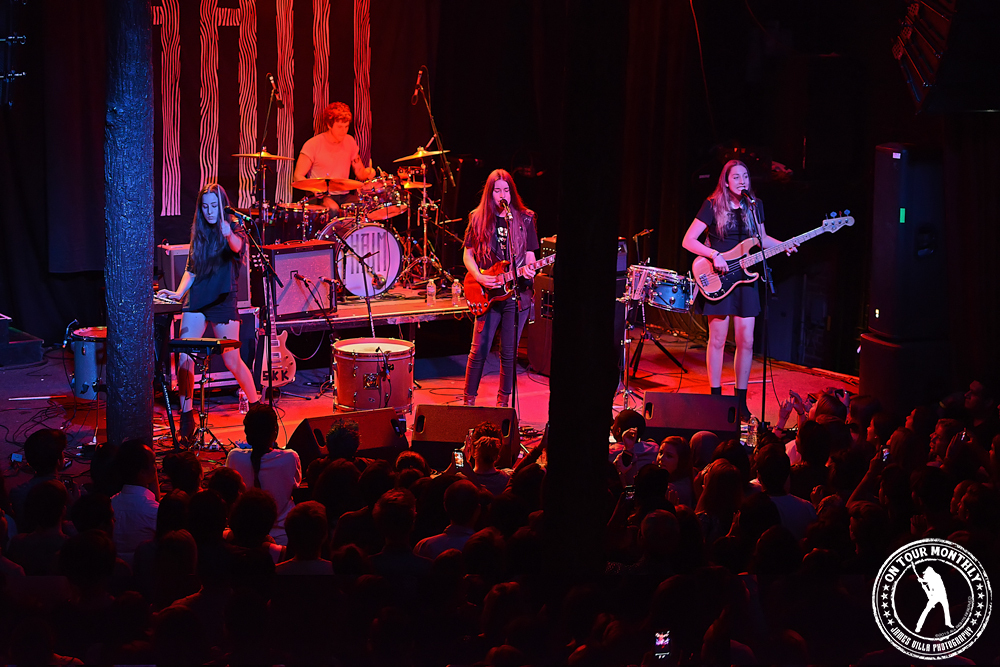 The venue was pretty packed nearly an hour before they were scheduled to go on, the bands fans coming out in droves to witness their Dallas debut, and it continued to grow until they took the stage.

At 10:02 the curtain was drawn open, which was met with some booming cheers and applause. Eventually, drummer Dash Hutton made his way on stage and took a seat behind his kit as he proceeded to dish out some beats. It was the girls who got the loudest response, though as Este descended the stairs and took her spot at stage left where her bass was, as well as a few drums. Danielle quickly followed, taking center stage, while Alana manned the keyboard for their first number…

They opened with the lead track and one of the singles from their new record, the entrancing, “Falling”. It offered a taste of what was to come, with a good deal going on, from the backing vocals Este and Alan were adding around Danielles’ singing, while the youngest of the siblings, Alana, also used an electronic drum pad giving it somewhat of an electronic sound. It was Danielle who stole the spotlight on that song, though, as she approached the edge of the stage to knock out an impressive guitar solo, which earned a lot of praise from the audience.

“I’m not gonna lie. I’m so fucking happy to be here tonight!” Este exclaimed, which was met with some cheers, the fans obviously glad they were here, too. They followed it with another single spawn from Days Are Gone, “The Wire”, which the crowd seemed ecstatic to hear. It further proved what a well-oiled machine they were, especially in the harmonies department, being nothing short of breathtaking, and Este even showed off her set of pipes, commanding everyone’s attention as she belted out the second verse.

Shortly after finishing it, she [Este] asked for the house lights to be brought up so they could see everyone, including the fans in the upstairs portion. As the blinding lights flooded the room, she said she had seen were a girl tagged the band on Twitter, saying something about “how many hot guys” were at the show. “…I concur.” Este said, saying she had wanted to see for herself.

“…We’re gonna jam for a bit.” Danielle stated before they launched into an instrumental prelude, that featured Alana banging on an additional drum that set at the front of the stage with a maraca, and rather intensely, I might add. It soon gave way to a rendition of Fleetwood Macs’ “Oh Well”, sung by Alana, her strong and at times even fiery voice being just what was needed to pull off the bluesy rock number. They jammed a bit on it, too, and there’s no doubt they owned the song, putting their own mark on it.

“This is our first time in Dallas together.” Este remarked upon finishing that cover, clarifying that Danielle had been here before when she played with Jenny Lewis. Este proceeded to run through the conversation her and Alana had with their sister when she called them from the Lone Star State a few years before, where she said she knew they were jealous that she was there and they weren’t. “…It definitely lit a fire under our ass to get the fuck out here.” Este finished, her love of the state seeming genuine and sincere.

Their focus soon turned back to the show, doing “Honey & I”, albeit a stripped down version to “make it special” as Este put it. Stripped down meant an almost entirely percussion intro, Este and Alana aiding Dash as they played the drums on their respective sides of the stage. It gave the song a very fascinating vibe, being completely different from what you hear on the record, at least until close to the end of the song when it escalated and sprang to life, bass and additional guitar in full effect.

At this point in the show, a fan shouted something at Este, presuming calling her hot. “…Can you shine your phone on your face so I can see what I’m looking at?” she asked the heckler. “Oh, a bearded gentleman.” She remarked, before paraphrasing Lionel Richie and saying, “I could do that shit all night long.” The bluntness of it all was hysterical, and it only got better when he asked her to take her shirt off, prompting her to point out she had a dress on, and if she did so, she’d be completely naked. They then turned it back on the guy. “Shirts are for work.” Danielle said, as the sisters started a chant for him to take his shirt off, which he ultimately didn’t do. “That poor guy, he’s never going to say anything at a concert ever again.” Alana said laughing.

That spontaneous moment was a nice break in the show, and Danielle posed a question to everyone before they kicked it back in. “Are you guys ready to dance or what?!” she asked before they fired up “Send Me Down”, which was yet another song that called for some extra drums. Alana then switched to her keyboard for what was somewhat of a fan request, Este noting she had gotten a text from someone who said if they didn’t hear this song this night they might shoot someone. Specifically, that was “Go Slow”, which they said they hadn’t done in awhile, but they were going to bring back the tranquil song, which has a slight R&B sound to it.

They weren’t quite finished socializing with the crowd yet, and now, after some comments were made with the audience, brought what they had said earlier in the night was their next break out song for album number two. It was a song they had made up for their tour anthem, going something like, “…Don’t give me the fake out, I just want to make out…”, and now, with Alana supplying the beat on her electronic drum pad, Este sang the little ditty. It was short and simple, sounding much more poppy than any of their actual songs, though it had an extremely catchy tune. “You laugh now, but by the end of next summer, you’ll all be singing that song.” Este said jokingly, before pointing at her head. “This isn’t just a hat rack, it’s a thinking thing.”

These young ladies were scoring tons of laughs from the crowd, but as the clock wound down on their time in Dallas, they got back to their music, doing two final songs to close out their 48-minute long set. One of those was the very chipper sounding “Don’t Save Me”, while they had saved their lead single for last and closed the night out with “Forever”.

A handful of people headed for the doors after that, though the majority of the audience remained steadfast, hoping they had another little something to offer. As it turned out, they did.

“I’m sorry to sound like a sixth grader, but you guys fucking rule!” Danielle exclaimed after they had stepped back on stage. They had one lone encore planned, and while it could be debated, I say they had truly saved the best for last. “Gimme out, gimme in,
I’d give you everything I could give…” Danielle crooned at the start of “Let Me Go”, periodically using a drum stick to pluck the strings of her guitar. The intro, which again had Este and Alana banging on their drums, was absolutely haunting and in the best possible way. Gorgeous is the best word I can think of to describe it, and it became more encompassing the further they got into it, eventually ending with a marvelous all percussion outro.

In today’s society, it’s pretty ease to typecast most female musicians as being pop artists, seeing as the majority of the more well known women musicians are, but don’t think that Haim falls into that category. They’re a rock band through and through, a fact that was made crystal clear this night.

It’s also worth noting that they had a mix of other genres to their music creating more of a unique sound, though from the guitar solos to the sonorous assaults on the drums, it was their rock side that shone the brightest this night. It even made the songs sound ever so slightly different than how they come across on the album, in a good way, of course.

From the stunning harmonies they are capable of producing, to their proficiency as musicians (as well as their mastery at the instruments), there’s no denying that Haim is a force to be reckoned with, and I dare say they’re one of the more original bands currently out there on the national circuit.

Relatively speaking, Haim’s show was on the shorter side, not even hitting the hour mark, but it was an example of how quantity isn’t always the most important thing. The quality was obviously there, and with all the jokes they were cutting throughout the night, it was every bit a comical experience as it was a concert, a blend the audience loved, already reminiscing about it as they filed out the doors.