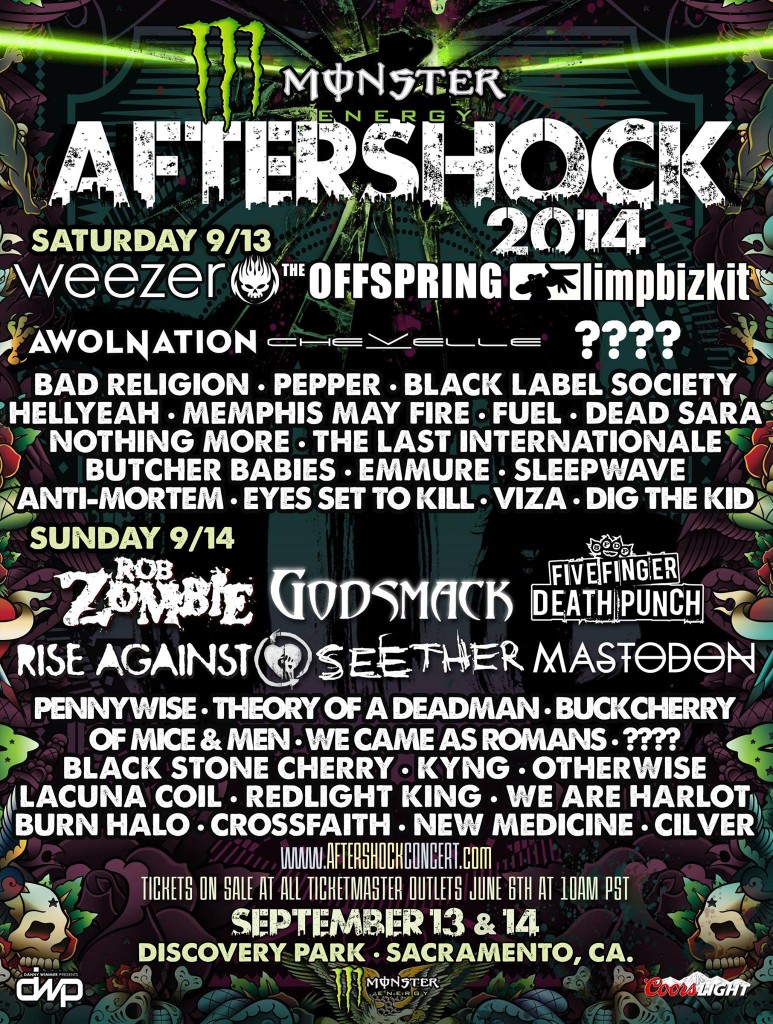 After the major success of last year’s festival (sold-out with 32,000 in attendance), California’s biggest rock festival is expanding to four stages in 2014, offering more bands than ever.

The daily band lineup for Monster Energy’s AFTERSHOCK Festival is as follows, with more bands to be announced on July 1:

The Offspring’s Dexter Holland says, “We’re thrilled to cap off our summer tour at AFTERSHOCK 2014 and play our Smash album in its entirety for NorCal music fans. It’s going to be an epic weekend.”

A special “Pre-Shock” discounted Weekend Ticket pre-sale for Monster Energy’s AFTERSHOCK Festival will take place from June 3-5 at www.AFTERSHOCKConcert.com/Tickets. During the pre-sale–which begins at 10:00 AM PT on Tuesday, June 3–a limited number of discounted Weekend General Admission tickets will be available for purchase. In addition, Weekend VIP tickets will be available at a reduced price during all three days of the Pre-Shock. The Pre-Shock ticket prices are as follows:

Hotel packages will also be available for purchase during the Pre-Shock pre-sale.

Regularly priced weekend and single day tickets go on sale Friday, June 6 at 10:00 AM PT at www.AFTERSHOCKConcert.com/Tickets, www.Ticketmaster.com and at all Ticketmaster outlets. Ticket prices will be as follows until June 9, when prices will increase:

As in the past, ticket discounts will also be available for active military through AFTERSHOCK partner GovX.